Tesla has decided to bake in the Model 3 Performance’s Performance Upgrade Package (PUP) for each order of the premium all-electric sedan. With this, the electric car maker has taken yet another step towards streamlining its vehicle production, while doing away with vehicles that were dubbed by the community as “sleeper” Performance Model 3s.

The update to Tesla’s online configurator appears to have happened recently, considering that the order page last Sunday still had options to select the Performance Upgrade Package for every Model 3 Performance order. The PUP is a free option, and it includes 20” performance wheels, performance brakes, a carbon fiber spoiler, lowered suspension, aluminum allow pedals, Track Mode, and increased top speed from 145 mph to 162 mph.

While the PUP was free, some buyers of the Model 3 Performance opt to forego the upgrade for the sake of more range. This is because, with the Performance Upgrade Package, the top-tier Model 3 is rated at 299 miles per charge. Without the PUP, the all-electric sedan gets 322 miles of EPA rated range, similar to the Long Range AWD variant, thanks in part to its 18” Aero Wheels.

These vehicles have been dubbed by the Tesla community as “sleeper” Model 3 Performance units, on account of their understated appearance and their immense power. Even without the PUP, after all, “sleeper” M3Ps has a 0-60 mph time of 3.2 seconds, which is more than enough to embarrass the occasional Hellcat or Porsche during a brief stoplight sprint. 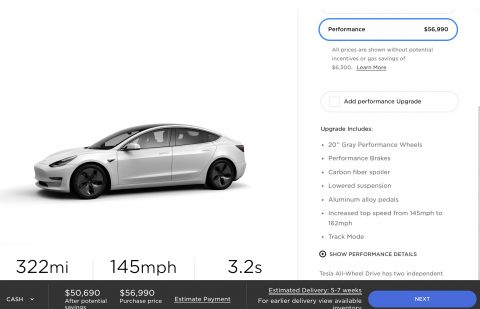 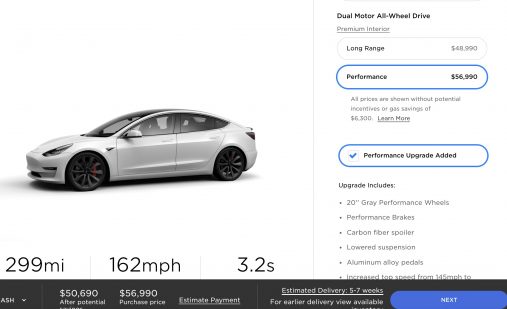 That being said, Tesla’s decision to bundle the Performance Upgrade Package with each Model 3 Performance highlights the company’s efforts at streamlining its vehicle production. Tesla is currently taking on the mass market with the Model 3 and the Model Y, after all, and in this segment, volume matters. This is especially true considering that Tesla is on its way towards establishing production facilities in countries such as Germany.

Overall, the loss of the option to order “sleeper” Model 3 Performance units may be missed by the electric vehicle community. Yet this is something that is largely expected as well, considering Tesla’s focus on efficiency. With every top-tier Model 3 having PUP by default, it would be easier for the company to produce the vehicle. This update may be pretty minor but it does help the company get closer to its goal of producing 500,000 vehicles this year.