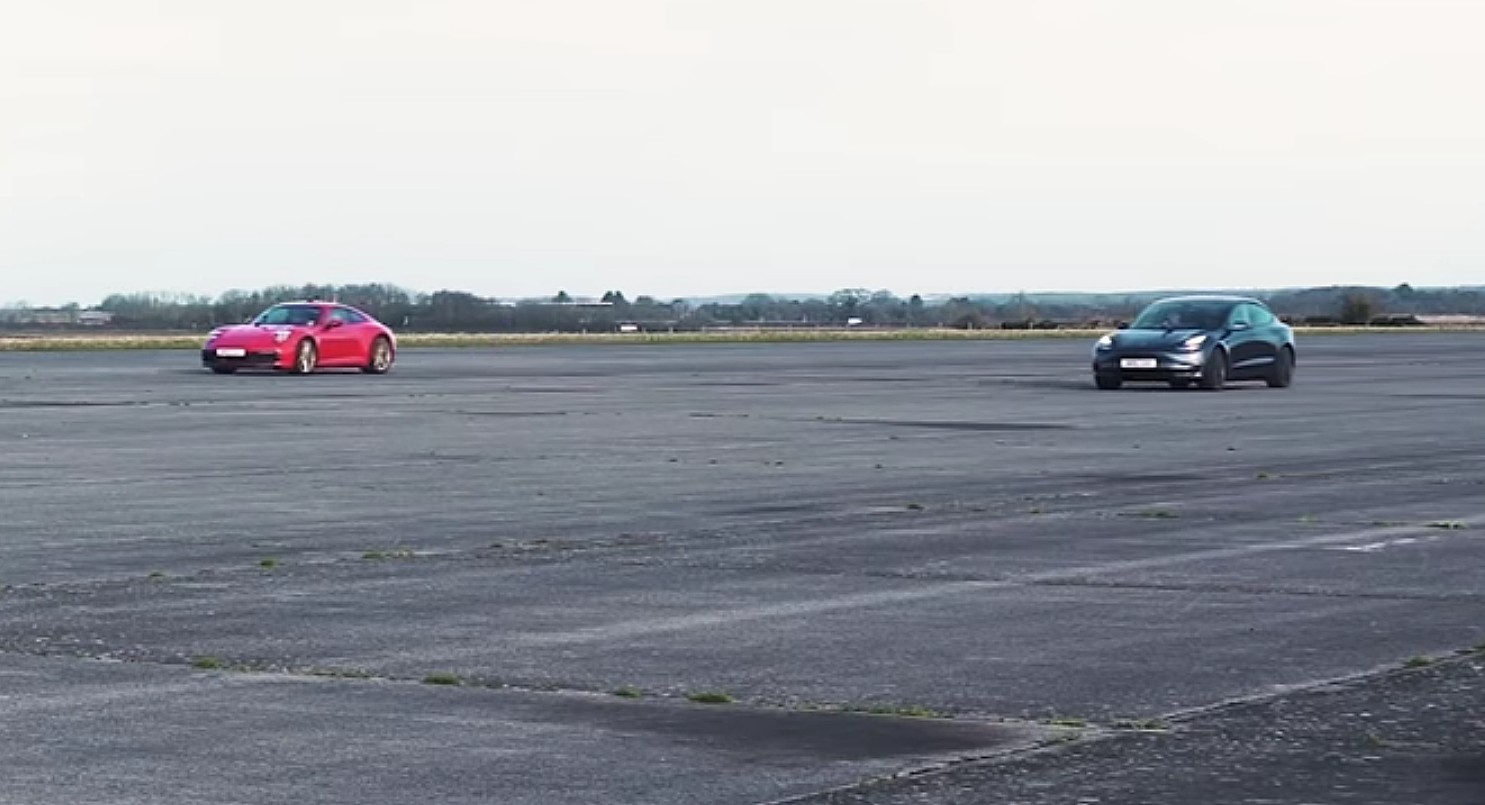 Teslas have been matched up with their high-performance gas-powered counterparts for a long time. In the latest test, the Model 3 Performance was pegged against the Porsche 911 Carrera S in three different quarter-mile drag races, a pair of “rolling start” races, and a brake test.

Comparing the two as far as specifications show, they should be pretty evenly matched on paper. The Model 3 Dual-Motor All-Wheel Drive Performance sports two electric motors and a 3.2 second 0-60 MPH time. The Rear-Wheel Drive 911 Carrera S, on the other hand, packs a 450hp, 3.0-liter 6-cylinder engine with a 0-60 MPH time of 3.5 seconds.

The test was performed by automotive YouTube channel carwow. It began with the three separate quarter-mile drag races, where the Model 3 won the first by completing the race in 11.8 seconds. The 911 Carerra S took 12.1 seconds to complete the race, narrowly losing to its electric counterpart.

However, the following two races would be won by the Porsche that completed the quarter-mile in 11.5 and 11.7 seconds. The Model 3 hit the 11.8-second mark in all three races, showing consistency in its performance.

The next two races required both vehicles to be rolling at 50 MPH and the first to reach 110 MPH would be considered the victor. The Model 3 Performance managed to win both of these races due to its exceptional acceleration rate. The Porsche was only able to surpass the Tesla when the vehicles were reaching speeds that were exceeding 125 MPH because the 911 Carrera S simply holds a higher top speed of 200 MPH. The Model 3 tops out at 162 MPH.

Finally, the two vehicles competed in a brake test to determine the car that could stop the quickest when traveling fast. The two drivers agreed to drive at 70 MPH and when each car crossed the finish line, the drivers would show the vehicles down until they reached a complete stop.

The results of this test were the toughest to judge as both cars stopped at almost identical distances. This indicates the Model 3’s braking system performs as well as a flagship high-performance vehicle. Interestingly enough, the Model 3’s braking performance was criticized by Consumer Reports in 2018. Tesla has evidently improved in the past two years as the car stopped in a safe and controlled fashion.

The six tests showed the two vehicles were pretty similar in performance measurements. With the braking assessment being a tie, the Tesla won 3-2 in the six tests and proved to be the superior vehicle. The Tesla Model 3 Performance is also half of the cost, only setting customers back $56,990, while the Coupe variant of the 911 Carrera S runs for $113,300.

The Model 3 has regularly outperformed some of the most notable performance cars in the world, including the Lamborghini Huracan and the Ferrari F12. The winning track record of the Model 3 shows great performance does not have to cost six-figures, nor does it have to come from an internal combustion engine.

You can watch carwow‘s tests between the Model 3 Performance and 911 Carrera S below.