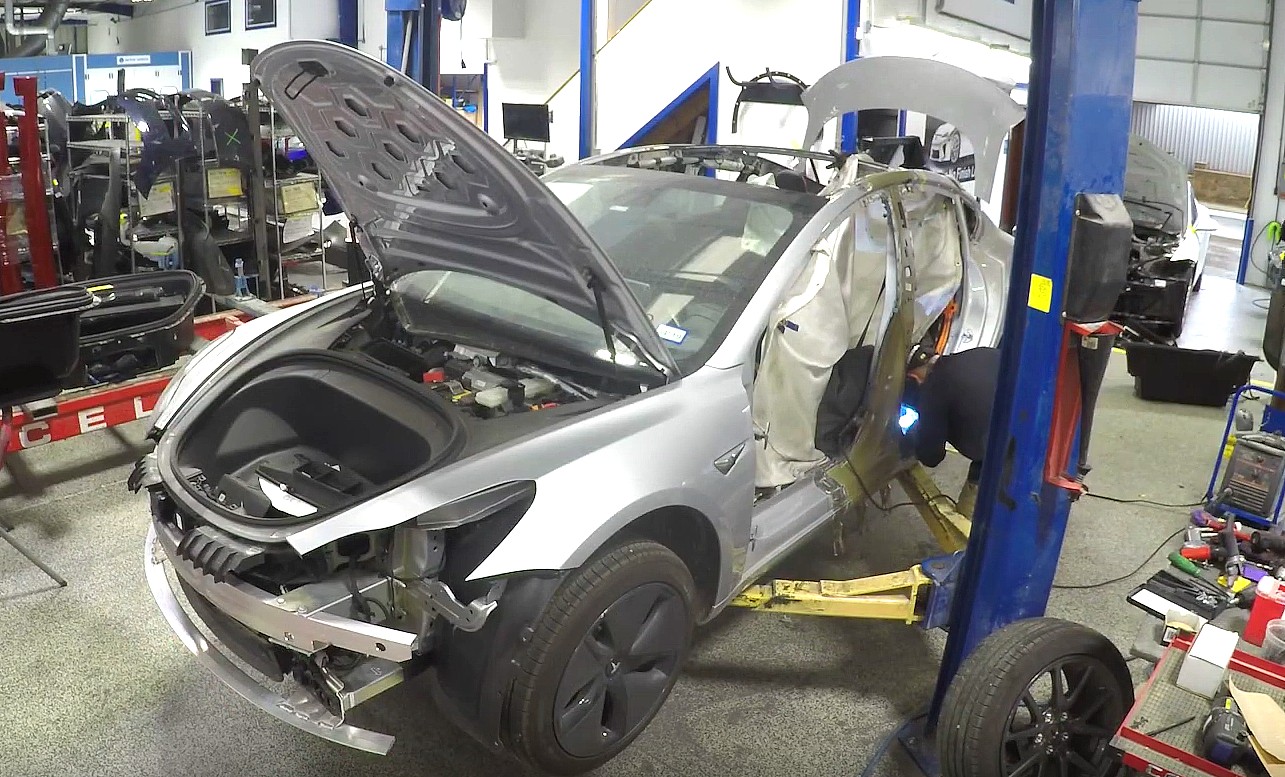 A Tesla-certified body shop from Austin, TX recently provided a unique look at the work that goes behind the repair and restoration process of a Model 3 with a damaged B-Pillar. As could be seen in a time-lapse video of the Model 3’s repair, the team from the body shop spent several days refitting the electric car with OEM parts, restoring it to showroom condition before handing it over to its owner.

The team that handled the vehicle’s repair, Autocraft Bodywerks, has been fixing Teslas for years. The shop noted that the repair and restoration of a Tesla are not as simple as that of internal combustion vehicles, with the electric cars requiring specialized training in aluminum welding and adhesive and mechanical joining tech. This specialized training was in full view in the recently shared time-lapse footage, as the Autocraft team could be seen carefully working on the vehicle to return it to its original state.

The Model 3 featured in the video was a Long Range variant that was involved in a traffic accident last October. The electric car was T-boned right in the middle during the incident, damaging the left side B-Pillar, as well as the left front and left rear doors. The entire repair procedure took a considerable amount of time, from the removal of the damaged pillar to the complete reassembly of the vehicle. Reassembly was no joke either, with the Tesla-certified body shop putting back the vehicle piece by piece, from its doors to its glass roof.

Considering that the Model 3 was T-boned late last year, the entire repair process still took a considerable amount of time. Autocraft Bodywerks noted that they only used OEM parts for the vehicle’s restoration, which could have contributed to the extended repair time for the Model 3. Tesla, for its part, has been pledging to improve its vehicles’ repair times, mainly as its fleet is currently growing at an unprecedented pace due to the Model 3’s ramp.

Tesla’s vehicles are among the safest on the road, with the company’s entire lineup being awarded stellar safety ratings from agencies like the National Highway Traffic Safety Administration (NHTSA). Among the factors that contributed to these ratings are the vehicles’ bodies, which are primarily made of aluminum. Aluminum has several advantages over common materials used in cars such as steel, such as lighter weight and great energy absorption during impacts, but the material is also notoriously difficult to work with. Thus, Tesla requires body shops such as Autocraft to undergo training and certification before they were greenlighted to perform repairs on the company’s vehicles.

Elon Musk has pledged to make the repair process of Tesla’s vehicles a lot faster and smoother, even noting that the company is aiming to achieve 24-hr turnaround times for vehicle repairs. Tesla has already accomplished these feats for minor repairs at its in-house body shops, though the program is yet to see a wide rollout. The company has also noted that it is doubling its service capacity this year to accommodate more vehicles.

Watch a Model 3 undergo a complete restoration in the time-lapse video below.