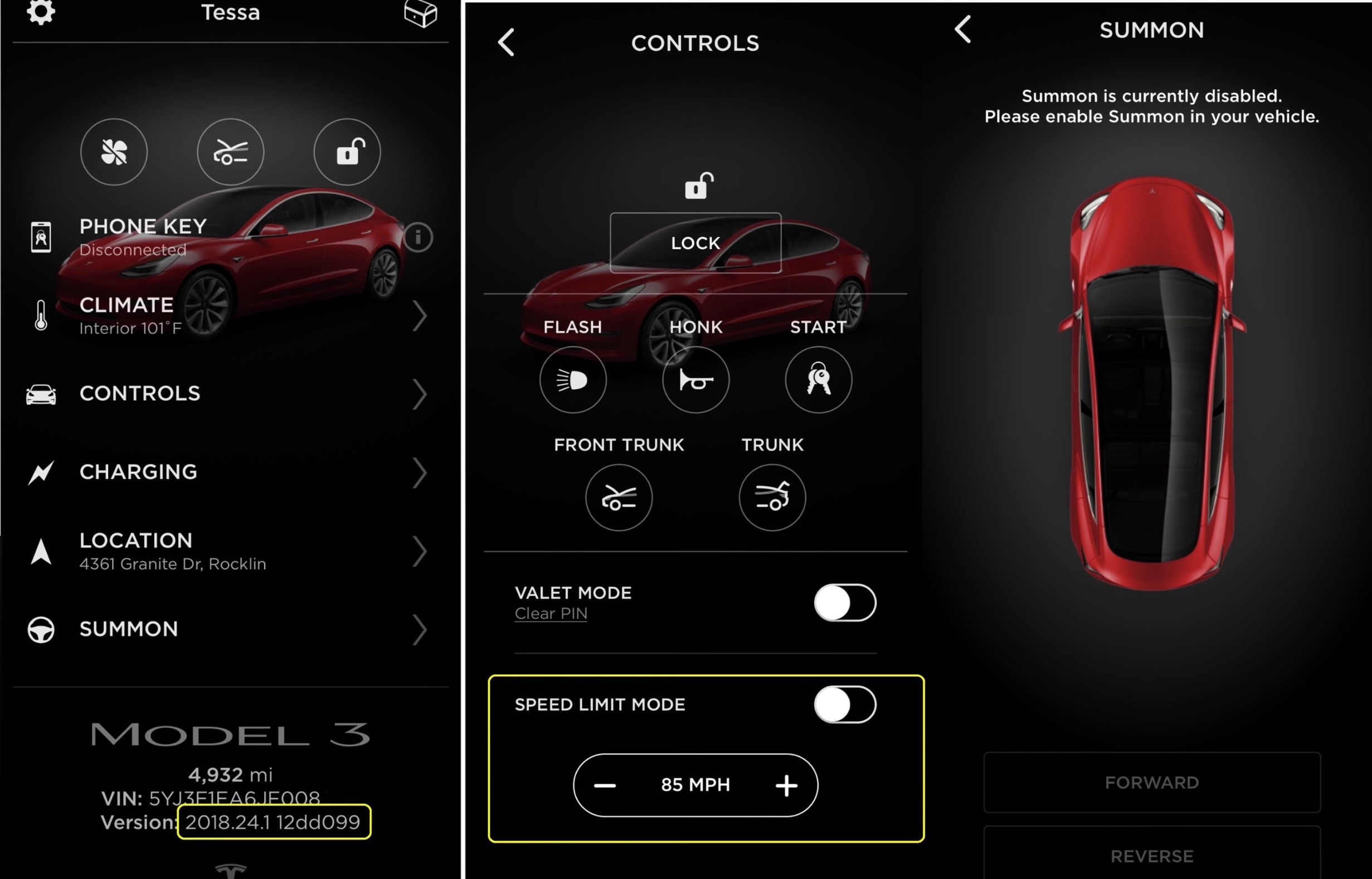 Tesla’s recent software update, v8.1(2018.24.1), introduced a number of new features for the Model 3, including Summon, cabin overheat protection, WiFi connectivity, and the ability to set speed limits on the vehicle.

Tesla enthusiast and Model 3 owner Ivan Karpenko recently shared a short walkthrough on how these features are accessed and adjusted through the Tesla mobile app. As could be seen in the video, setting the speed limits for the compact electric car on the mobile app is as simple as navigating to the Controls menu and scrolling down to Speed Limit Mode, which is located underneath Valet Mode. Speed Limit Mode is activated by tapping on a button and keying in a 4-digit PIN. Setting the maximum speed of the vehicle is just a matter of tapping or long-pressing the “+” and “-” symbols on the app.

Summon, on the other hand, is accessed by scrolling down the list of menus on the Tesla app and selecting the feature. In the mobile app’s current version, Summon is placed directly below Location. Tapping on Summon takes users into a menu displaying the Model 3, and if the feature had been activated in the vehicle, drivers would be able to command the car to move forward or in reverse.

Tesla’s new features for the Model 3 are focused on safety. Cabin overheat protection, which is enabled on Tesla’s electric cars by default, is a means to proactively prevent instances when children or animals get too hot when left inside the vehicle. Child fatalities resulting from in-car heat strokes is are severe problem in the United States. Last July 2017 alone, America saw 31 child fatalities — a record high at the time — resulting from heat strokes after children were left in a parked car.

Also notable in the Model 3’s recent updates is the Speed Limit Mode, which places limiters on the vehicles’ acceleration and maximum speed. Speed Limit Mode is described by Tesla as follows.

“Speed Limit Mode – This feature limits the acceleration of your vehicle and allows you to set a maximum speed limit between 50 mph and 90 mph. While your car is in Park, you can activate Speed Limit Mode by tapping Controls > Safety & Security on the touchscreen or by tapping CONTROLS on the mobile app. You must use the same 4-digit PIN to enable or disable Speed Limit Mode. A notification is sent to your mobile device is your vehicle approaches the set maximum speed. — In memory of Barrett Riley.”

Barrett Riley, 18, lost his life in a fiery accident after driving his Model S at speeds of 116 mph in a 30 mph zone, according to a Sun-Sentinel report. One of Barrett’s passengers, 18-year-old Edgar Monserratt Martinez, was also killed in the crash. In its investigation into the accident, the NTSB noted that the electric car was traveling at 116 mph three seconds before impact, slowing to 108 mph as the driver applied the brakes, and decreasing to 86 mph as it hit a wall.

After Barrett was cited for overspeeding last March, his father asked Tesla to adjust the vehicle’s speed through an over-the-air adjustment. Speed adjustments, after all, are already being implemented on loaner vehicles, which are limited to 85 mph. Based on the release notes of Tesla’s recent software update, it seems like Mr. Barrett’s requested feature can now help make Tesla’s fleet even safer.

Watch a brief walkthrough of the Model 3’s Speed Limit Mode and Summon in the Tesla mobile app below.