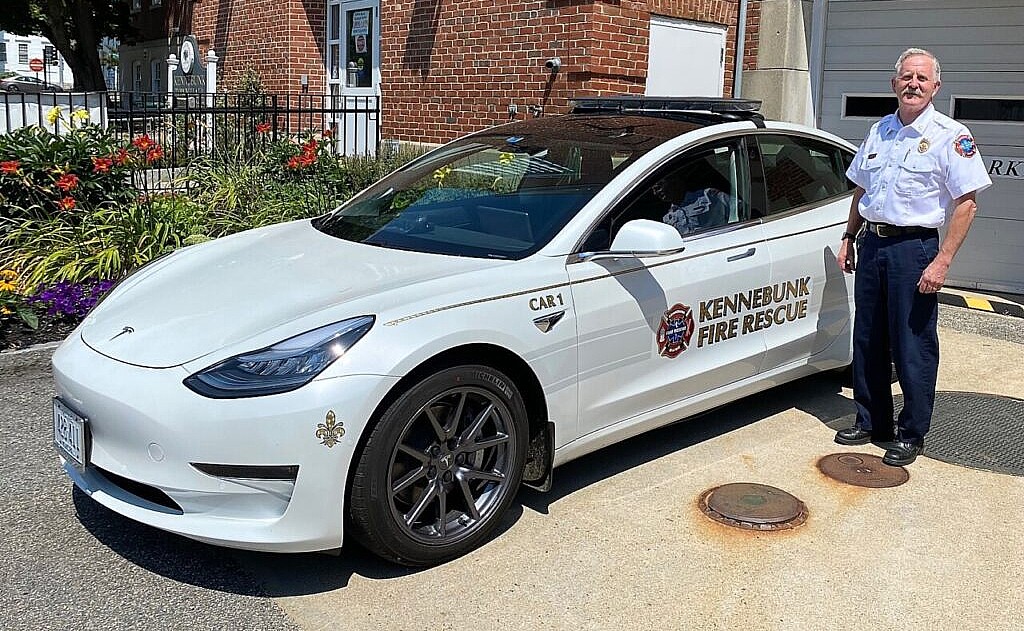 With the Tesla Model 3 proving itself as a viable alternative to gas-guzzling police vehicles across the globe, it appears that other key organizations such as fire departments are now looking to utilize the all-electric sedan for their operations. Among the most recent places to do this was Kennebunk, Maine, which recently revealed that it has acquired a Model 3 as a command vehicle for the city’s fire chief.

Interestingly enough, Kennebunk Fire Department Chief Jeff Rowe had been looking to acquire a Chevy Tahoe as his next command vehicle when he heard a presentation at the local Rotary Club about the effects of environmental changes. Kennebunk already has committed to energy efficiency, being one of the signatories of the Global Covenant of Mayors for Climate and Energy. Other vehicles were then considered, including the Model 3 itself.

However, the Model 3 was more expensive than the Tahoe, and it was above Efficiency Maine’s ceiling, which would have given the vehicle a $7,500 incentive. But it appears that Rowe was really set to drive an electric car, as a Tesla representative later contacted the fire chief about the Model 3’s options. As it turned out, if the fire department ordered a variant with a base white color, the all-electric sedan could meet the threshold for the state’s incentives.

The Kennebunk Fire Department ultimately acquired a Model 3 Dual-Motor AWD variant. The purchase ultimately cost $41,490 including the $7,500 state incentive. This made the Model 3 only $2,000 more than a Chevy Tahoe, and that difference is easily leveled out by the all-electric car’s gas savings. Rowe drives about 9,000 to 10,000 miles annually, after all, which translates to about $1,500 a year on gas. The Model 3, on the other hand, is expected to raise the fire department’s electric bill by $30 per month, which translates to about $360 per year.

For now, the Tesla Model 3 command unit is being used primarily by Rowe, as well as other fire department personnel. It’s used for traveling to inspections, fire calls, related meetings, and out-of-town events. The department is also building a slide-out office at the rear trunk of the Model 3 as a command center of sorts where the chief could keep track of updates at fire scenes. The Model 3’s command center is smaller than those found in SUVs, Rowe noted, though it was quite comparable to the Ford Crown Victorias that were used by the department before.

In a press release, Rowe noted that his transition to the Model 3 actually proved to be quite smooth. There are charging stations in the city, and a Level 2 charger had been installed at the fire department. According to the chief, he typically plugs in the Model 3 when he arrives at work in the morning, and the vehicle is usually fully-charged by noon. He also mentioned that the Model 3 behaves quite nicely on the road, since there’s no wait or hesitation when he presses on the accelerator. There’s just the rush of instant torque propelling the Dual-Motor AWD Model 3 from 0-60 mph in 4.4 seconds.