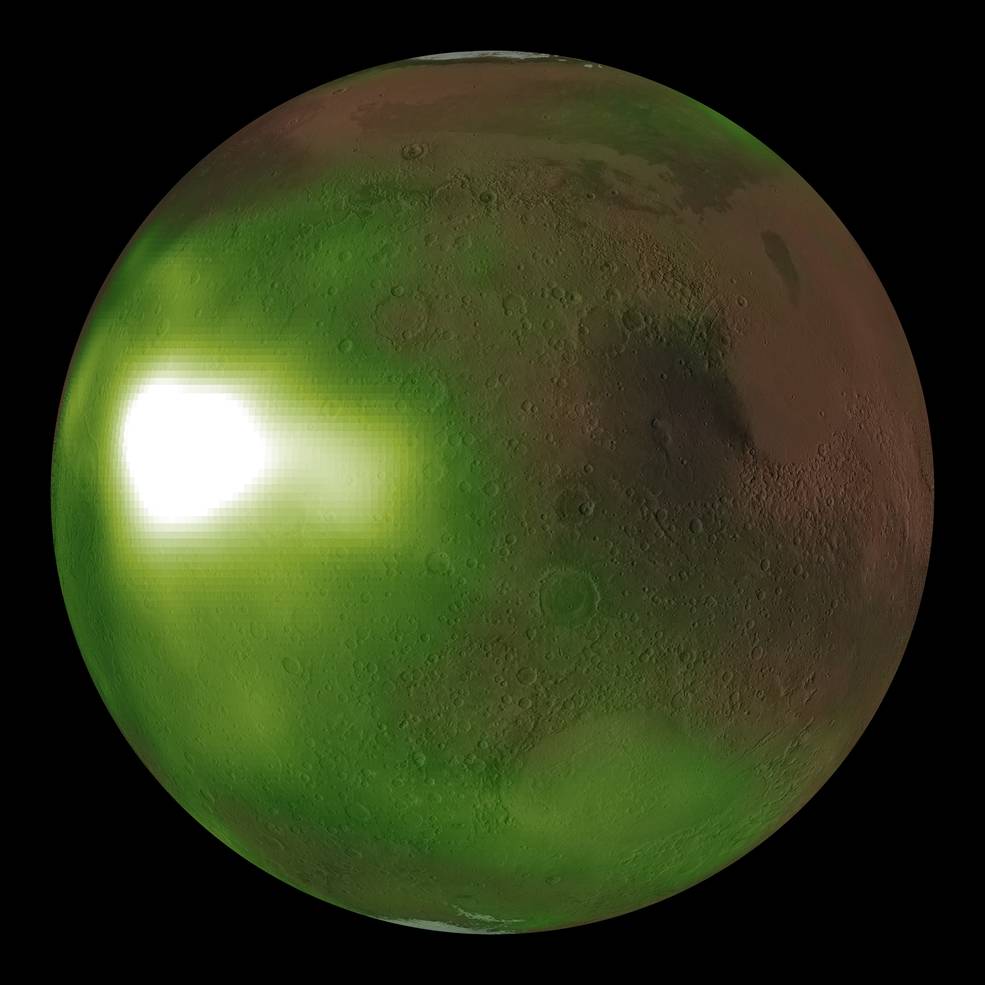 The sky on Mars has a wind of ultraviolet light that pulses as it moves across the red planet. This phenomenon is similar to Earth’s aurora borealis events, lasting from sunset until midnight, and NASA has created a new animation using data obtained from an instrument on the MAVEN spacecraft to demonstrate what it might look like to future astronauts in orbit. That is, it’s what they would see if it wasn’t invisible to the naked human eye.

“The ultraviolet glow comes mostly from an altitude of about 70 kilometers (approximately 40 miles), with the brightest spot about a thousand kilometers (approximately 600 miles) across, and is as bright in the ultraviolet as Earth’s northern lights,” explained Zac Milby, a researcher at the University of Colorado’s Laboratory for Atmospheric and Space Physics (LASP).

Milby is one of several other LASP scientists that published a recent study on the ‘nightglow’ data in the journal JGR Space Physics. The team analyzed two Martian years’ worth of images taken by the Imaging Ultraviolet Spectrograph (IUVS) on the Mars Atmosphere and Volatile Evolution (MAVEN) mission spacecraft to find the reported wind and UV emission behavior. “The MAVEN spacecraft orbiting Mars has obtained a new type of imaging data which reveals the effects of global‐scale winds and waves in the upper atmosphere,” the study’s Plain Language Summary details.

With a mission to Mars in the near-term travel plans for both NASA and SpaceX, learning as much as possible about the planet’s atmosphere is essential. Preparations for both on-site scientific study and astronaut safety will need to incorporate the Martian ground conditions, so studies like this one provide very important and relevant data. The recent findings also demonstrate the importance of cooperative international efforts in exploring deep space, namely because MAVEN wasn’t the first spacecraft to demonstrate the existence of the ‘nightglow’ phenomenon. Rather, the European Space Agency’s Mars Express orbiter mission revealed it in 2003, leading the path for follow up and further study.

It may also be interesting to note that although Mars-based astronauts may not be able to see the UV aurora-type nightglow with their normal eyesight, instruments could likely come into play to overcome such limitations. We already have commercially available UV cameras on Earth, for instance. There’s even a UV camera smartphone add-on that one could see being used on Mars to watch the glow show in a similar fashion to augmented reality starfinders on the market.

Of course, much more science-oriented UV cameras would likely accompany any travelers to the planet, but it’s fun to imagine what may be available to more tourist-types or even Martian colonists some day.

You can watch a video of NASA’s animation of the UV nightglow wind on Mars below: