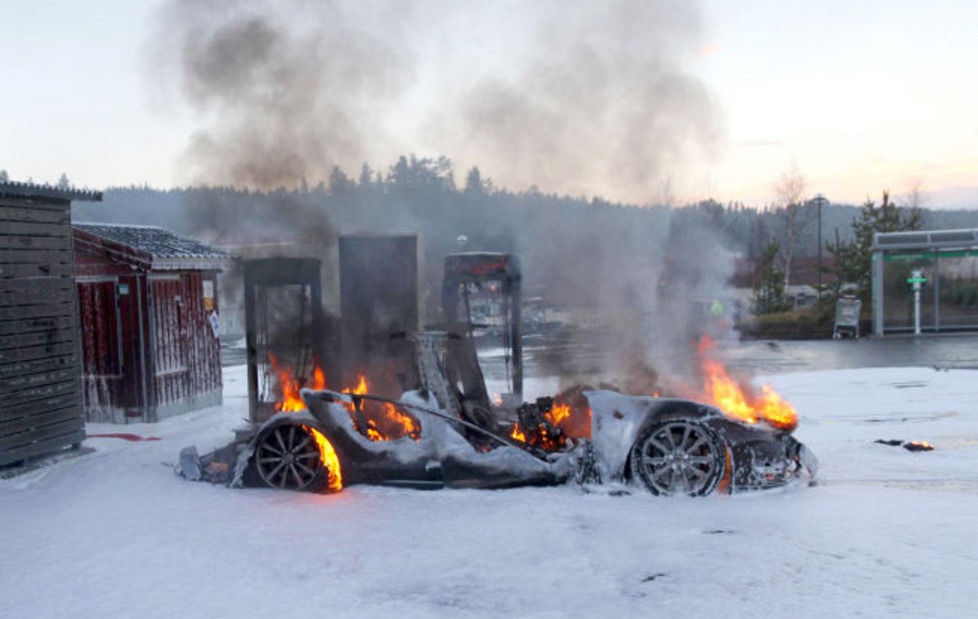 Shortly after 2:30pm local time on Friday, firefighters were dispatched to a Tesla Model S that caught fire while fast-charging at the Sundebru Supercharger in Gjerstad, Norway.

We were tipped off by several Tesla owners within the area after local fire department and police have quarantined the immediate area surrounding the Supercharger station. The fire is described by vg.no to have started while the owner of the Model S left the car while charging at the Supercharger stall.

Shortly after the car ignited into flames before burning down to the ground as seen in the photos released by Tv2.no. Firefighters took longer than normal to extinguish the fire, because unlike a traditional fire where water is used as the extinguishing agent, fires in electric vehicles need to be extinguished using a different methodology.

Updated Jan 2, 2016: Per safety information from Tesla, no amount of regular water could be used to extinguish electrical fires, so the Model S was left to burn to the end without intervention from local firefighters. According to Norway’s FVN, “Only way to extinguish the fire in electric cars is by using water with a copper material. It is too costly for the Norwegian fire departments have started using it.”. No one was in the vehicle at the time and no injuries were reported as a result of the fires. According to local media TV2.no, the cause of the fires is unknown at the moment though police are currently interrogating several witnesses who were present near the site.

Tesla is currently working with local Police on investigating the cause of the fire.