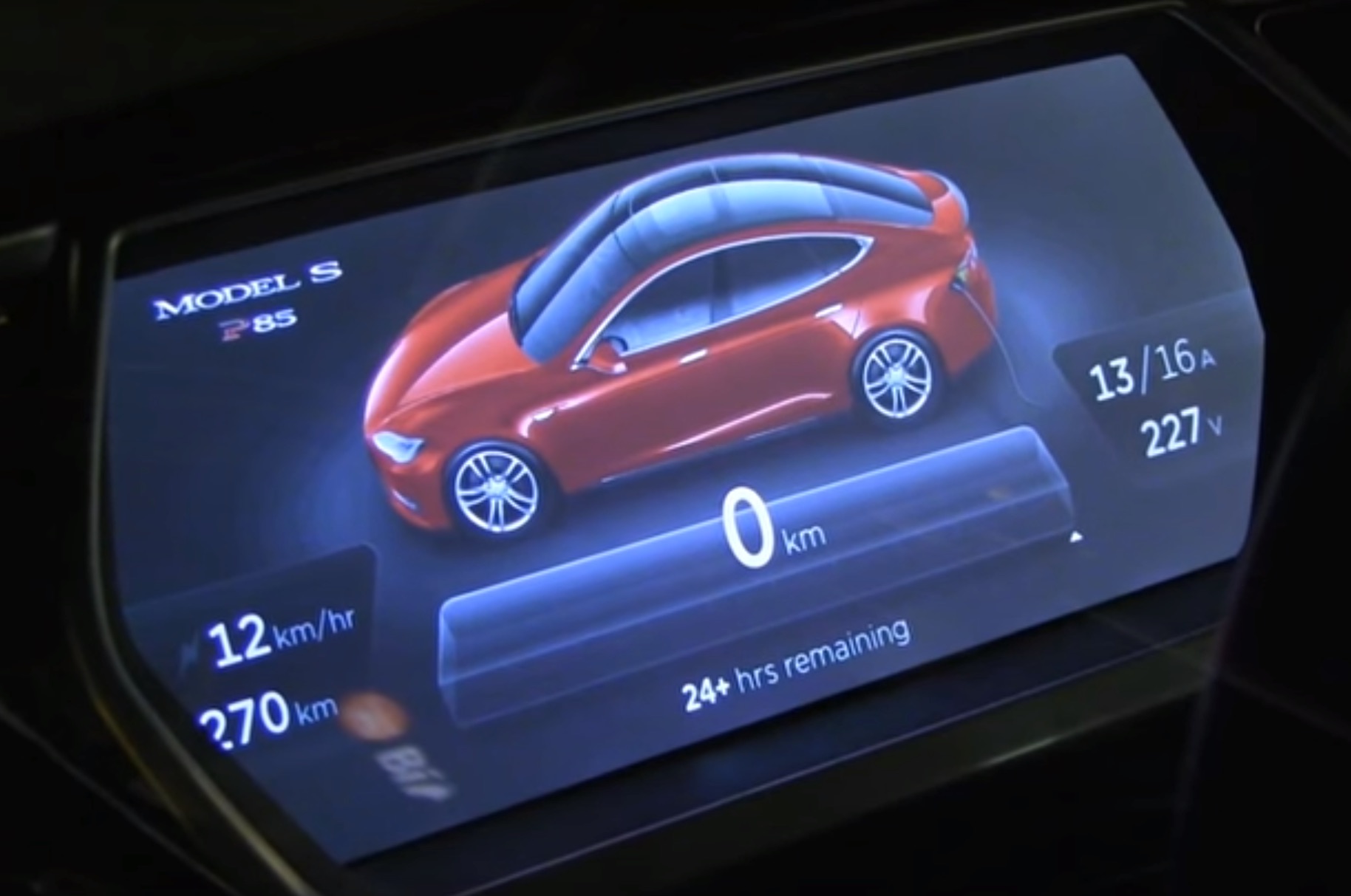 What happens when you completely run out of battery in your Tesla Model S?

Updated Jan 2, 2016: Since this story was originally published, there’s been several Tesla firmware updates that presumably have altered the behavior of the Tesla battery pack. In specific, providing a “buffer mileage” after the battery runs down to 0 mi/km of range. When we originally experienced running out of battery under Firmware 5.9 as indicated by the “0” miles left on the instrument cluster, the Model S continued to travel for another 10 – 20 miles.

The most recent video by Bjørn Nyland under Firmware 7.0 seems to show that 0 means 0, or almost. Bjørn’s video suggests that the Model S came to a stop after the vehicle reached 0 km of range, however after an hour’s worth of charging under 13A, the vehicle was able to regain enough energy to continue driving despite the cluster still reading “0 km” (starting at 3:25 min of the video).

There’s been reports from Tesla owners that “balancing” the battery pack will help Tesla’s algorithms calibrate an absolute zero for the vehicle, though representatives from Tesla have said in the past that “‘pack balancing’ is not really necessary“.

So it’s the question everyone seems to want to ask following our recent Tesla racing story where we made a small mention that we … ahem, got stranded on the side of the road with no battery range left. How does one possibly run out of power in an 85 kWh Tesla Model S rated for 260 miles of range?

I’m sure some of you would suggest that the headline to this story should read “Only dummies run out of battery in their Tesla Model S”, especially considering Model S owners have done record breaking 12,000 mile journeys across four corners of the nation, not to mention that one Model S owner even crossed the country, and back, in a 60 kWh version.

We’ve received a lot of questions via emails, comments and even through media coverage on the topic, despite the story’s main intent of showcasing our Las Vegas Motor Speedway racing conquests, so we’ll go ahead and try to address them all here.

The Tesla Model S provides you with a read out on the range (in miles or km) that’s remaining given the battery’s current state of charge. The rated range is formulaic and based on Tesla’s proprietary algorithms which attempt to estimate range by determining how much energy is stored in the battery. As its label implies, it’s truly just a rating.

Tesla’s rated range does not account for elevation changes or wind conditions. We find the site EVTripPlanner does an excellent job with estimating power consumption by taking into account speed, climate control usage and elevation changes. This graph shows the correlation of speed with available driving range. The slower you travel, the less amount of air drag and therefore the more range you’ll be able to squeeze out of your Tesla.

That said, there are factors you can’t predict upfront, such as wind conditions. While not a big concern in most cases, it should be taken seriously in areas that are prone to high wind conditions and strong gusts. A strong head wind can almost double the Model S power requirements. Even slowing down does not render a substantial improvement. With that in mind, get as much extra charge as possible and drive extra conservative well before crossing into high wind territory. It’s easy for us to say that now having just learned from our Las Vegas to Barstow experience.

So how did you run out of battery?

I wish I could tell you that it was due to an act of heroism where by we veered our Model S off the freeway and onto a narrow dirt road, in pursuit of a big-headed green Martian that needed our help getting back to its space transporter. After all, we’re driving an Intergalactic SpaceBoat of Light and Wonder so it would only make sense that we assisted.

We ran out of charge because we severely underestimated the strength of the wind and didn’t leave enough buffer early into the drive to account for these unforeseen weather conditions.

We left the Las Vegas Tesla Supercharger with approximately 240 miles in range thinking it would be more than enough power to reach the Barstow Supercharger station that was 160 miles away.

A sand storm with strong headwinds of 35 mph, combined with the steep elevation changes and our usual keeping-up-with-traffic speed of 75 mph, well before reaching the sand storm, all culminated into one of the most stressful situations we’ve ever experienced in our Tesla Model S. We ended up 3 miles shy of reaching our destination, taking into account the additional 10 – 20 miles of reserve range that we were able to tap into. This equates to an additional power consumption of roughly 60%.