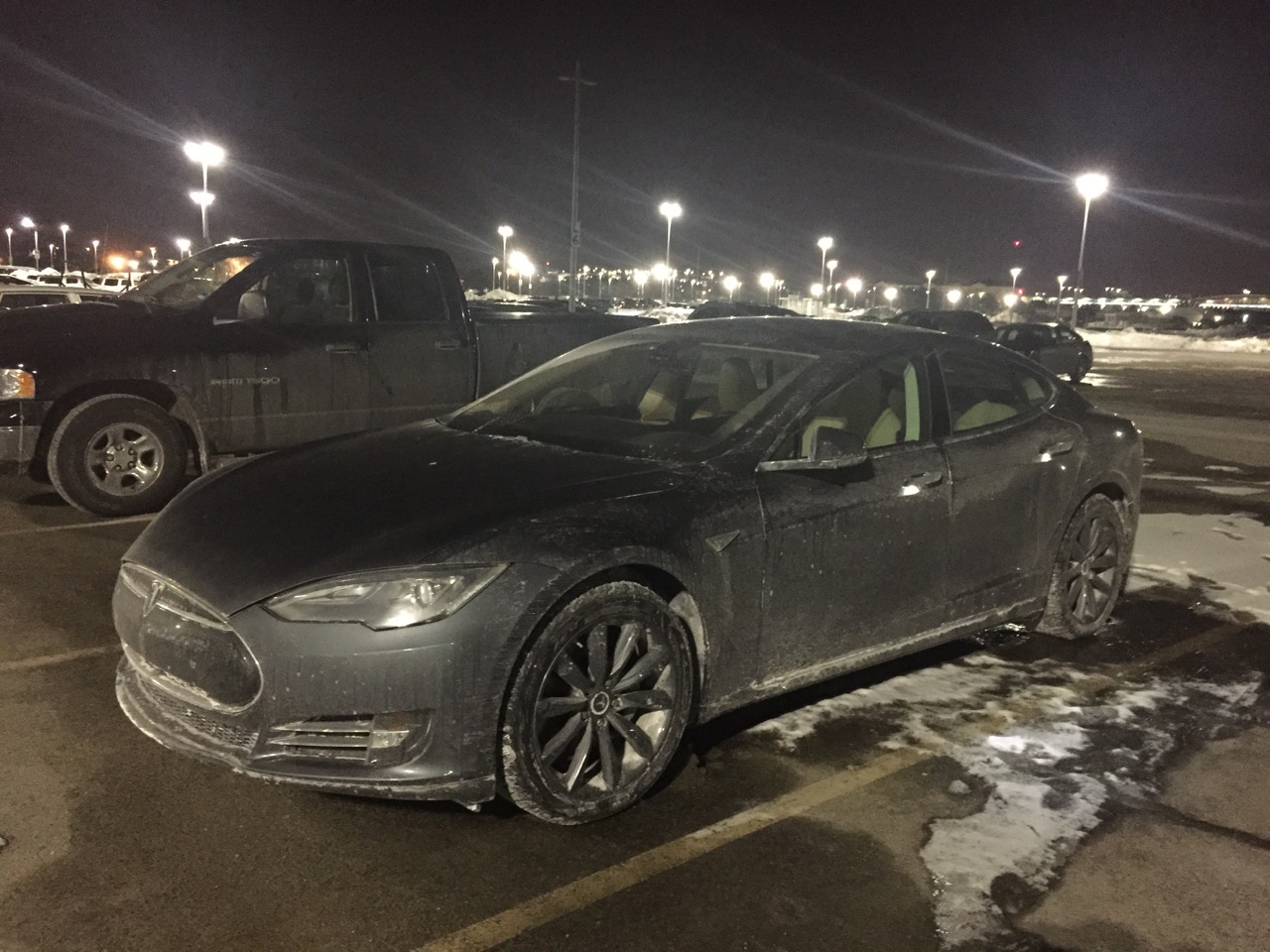 One of the many joys that new Tesla owners may come across are situations where they’ll need to leave the vehicle parked for a prolonged period of time and at a location that doesn’t have a charger. The natural thought is, what will this do to the battery?  I inevitably came across this same situation recently and wanted to take this opportunity to share my experiences around it. My first mission in any parking lot is to find a “Tesla approved” parking spot. That’s a spot large enough to fit the Model S but also minimize the chance that neighboring cars  will leave me with unwanted door dings. This is especially the case when driving through a busy city like Boston where space comes at a premium.

RELATED >>> S in the City: Model S Owner Experience in the Big City

If I can find a parking space that’s adjoined to a curb on one side, it’s a bonus — I get close enough to the curb (without scraping it!) to maximize the distance to the next space and minimize ding chances.

If I’m making my way to an airport, I know to avoid the busy short term parking garages where the hustle and bustle of pick-up and drop-off traffic is just enough for me to not want to be there. Instead I head towards the long term economy lot where my chances of any unwanted run-ins with other cars is at a minimum. There I look for my “Tesla approved” spot between two already parked cars. There’s a good chance that I’ll come and go before the other cars in the long term lot. Some parking lots also rotate parking locations for new entrants which further reduces the risk of having a new incoming car park next to me.

While Tesla has made some really great firmware improvements to address the dreaded vampire drain, there is still some battery loss when the car is not in use. Even when the car is off and stowed away for long term parking the Model S battery will still discharge albeit at a slower rate as it continues to provide power to the onboard electronics.

You can help minimize battery discharge by enabling “Energy Saving” under the “Power Management” settings on your Model S.  I was able to quantify some of this loss which I’ll describe later in the post.

From the user manual, Tesla says this:

However based on my experiences “Tesla math” when it comes to range is often optimistic and not necessarily what you’ll see in the real world. I took a short business trip to Las Vegas recently which required me to leave my Model S in long term parking for a couple of days.

I lost 14 rated miles over the 2.6 days at an average temperature of 16 degrees fahrenheit. So I lost an average of 2.3% rated range per day which is quite a bit higher than the manual indicates. This wasn’t long enough to qualify as long term parking but it’s still important to take note that the rate in battery discharge can be more than double of what you’re expecting. Plan accordingly.

While the loss was higher than I expected, I still had plenty of range to get back home and give my Model S a much needed bath. Be smart and plan out your Model S long term parking strategy, especially if there isn’t going to be a charger on site or nearby. Be sure to have enough battery range upon return so that you can get to your destination or to the nearest charging location.

Tesla suggests a 1% battery discharge loss per day but you may want to consider a more conservative 3% number to ensure you have plenty of range left upon returning.

There are reports of Tesla owners having parked at the airport with a low state of charge only to find  car the the battery was drained upon returning. Bjørn Nyland of YouTube notoriety had an experience with long term parking (27 days at an airport with no charger) which resulted in less than a 1% loss per day – obviously a much better result than I had. The video showed a temperature of 8 degrees celsius, or about 46 degrees fahrenheit which is much warmer than it was for my test which may account for the difference in battery drain.

That said, the Tesla Model S can be safely left in long term parking without a charge and still have plenty of range left to get you home. Just be sure to take into account the number of days the car will be left unattended multiplied by a 1-2% battery discharge per day and you’ll be greeted with a happy Tesla upon returning.