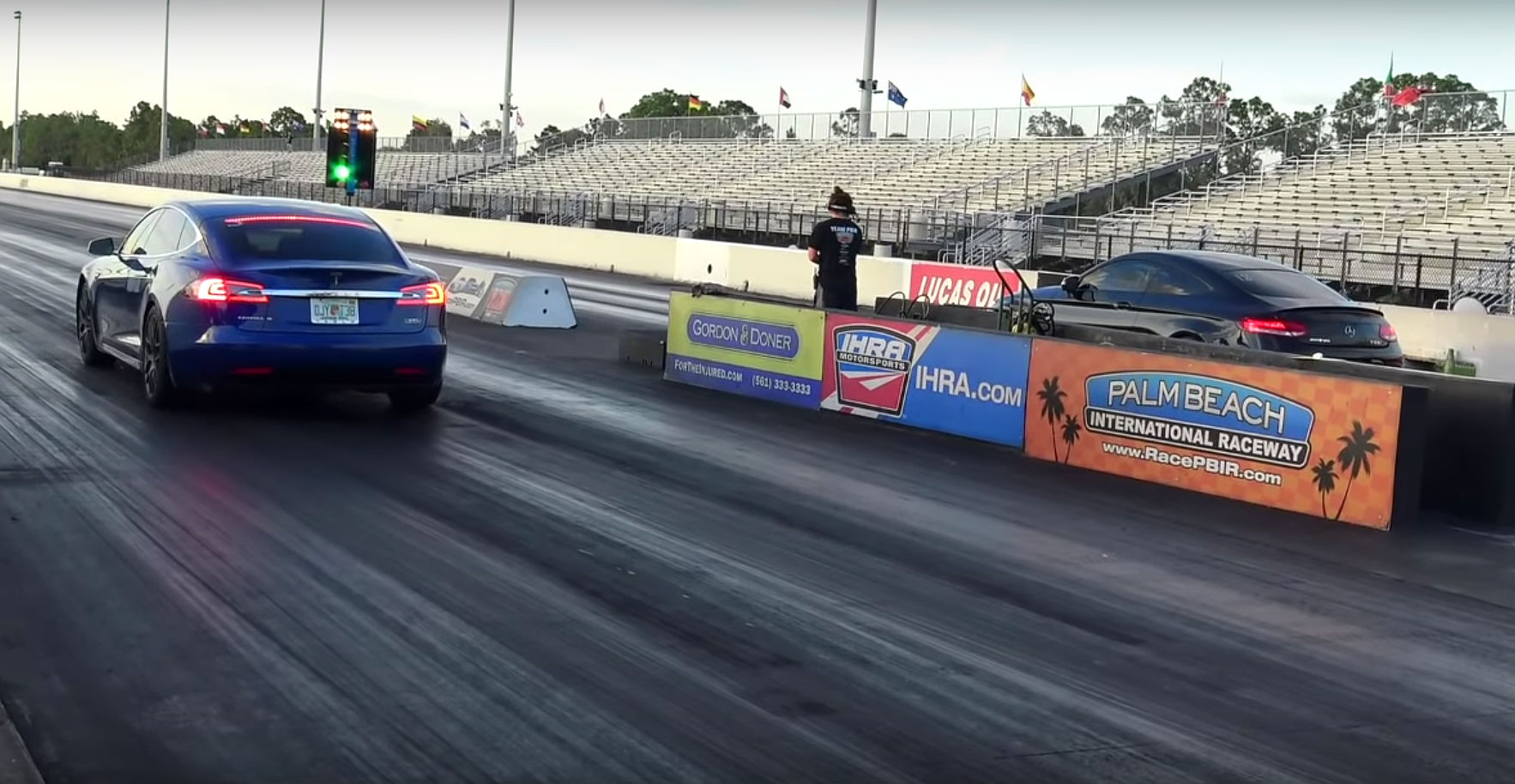 A Tesla Model S P100D went head-to-head in a quick quarter-mile race against a Mercedes C63S AMG. Despite a poor launch off the line, giving up a head start to the German-made performance coupe, the American-made all-electric luxury family sedan proved powerful enough to finish the race in dominating fashion.

The race between the Model S P100D and the Mercedes C63S AMG was shared by Road Test TV, a YouTube channel for auto enthusiasts. As noted by the race-themed channel, the P100D and the C63S AMG could not be any more different, but both cars bring some serious performance on the drag strip.

The 2018 Mercedes C63S AMG is one of the German automaker’s most well-rounded vehicles, being a performance car fitted with a 4.0-liter Biturbo V8 engine that makes 503 horsepower and 516 lb-ft of torque. All this power is channeled through a 7-speed multiclutch automatic transmission (MCT), which utilizes a wet startup clutch instead of a torque converter; thus, enabling the vehicle to improve both its performance and efficiency. The German-bred ICE vehicle can sprint from 0-60 mph in 3.9 seconds. Its top speed stands at 180 mph.

The Model S P100D, on the other hand, is a vehicle that is built from the ground up with technology in mind. The all-electric car features dual motors, with the front unit making 259 horsepower and the rear motor making 503 horsepower. Thanks to the instant torque provided by its electric motors, the Tesla Model S P100D can produce 920 ft-lbs of torque instantly, allowing the family sedan to achieve a 0-60 mph time of 2.3 seconds. The Model S’ top speed, however, is software-limited to 155 mph.

As could be seen in the video of the drag race battle between the two vehicles, the Model S P100D gave up some distance to the Mercedes C63S AMG off the line, with the German-made car starting the race a fraction of a second before the Tesla. Despite this, however, the raw power of the Model S P100D’s twin electric motors was enough to quickly catch up, overtake, and maintain a lead against the C63S AMG. The end results of the quarter-mile race were quite interesting, as both vehicles were speeding at 119 mph when they finished the run. The Model S P100D, however, completed the race at 11.03 seconds, while the Mercedes C63S AMG finished the run in 12.36 seconds.

While the Model S P100D, as well as its larger sibling, the Model X P100D, are established players in the quarter-mile race, Tesla’s compact sedan, the Model 3, is steadily gaining some solid reputation on the track. Just recently, a non-Performance, Long-Range RWD Model 3 with aftermarket modifications from the OnPoint Dyno/Mountain Pass Performance team proved its worth at the 2018 Canadian Sport Compact Series, winning 1st place in the Time Attack series after beating a Porsche Boxter and a Mazda RX-8. As noted by professional race car driver Sasha Anis, who drove the electric car in the event, the Model 3 proved track-worthy, finishing as 5th overall among the participants of the 2018 CSCS.

Watch the Model S P100D and the Mercedes C63S AMG battle it out on the drag strip in the video below.