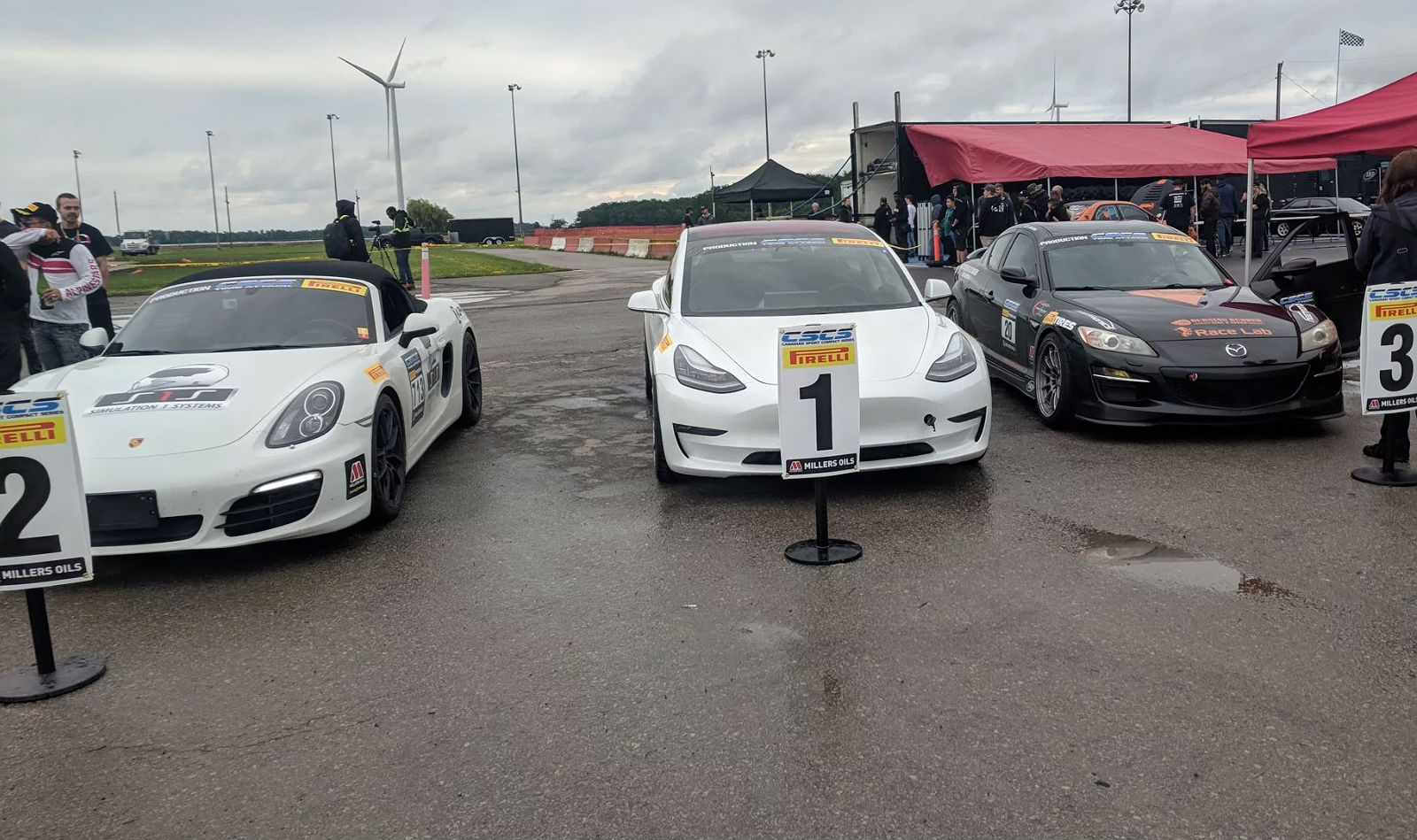 A modified Tesla Model 3 was able to grab the win in its category at the Canadian Sport Compact Series Time Attack series, beating out a Porsche Boxter and a Mazda RX-8 on a slippery track. The Model 3 was driven by professional driver Sasha Anis, who is part of the OnPoint Dyno/Mountain Pass Performance team.

The Model 3’s track performance has already proven to be notable over the past few months, but so far, most of the vehicles were driven by novice drivers on the track. This time around, however, an actual race car driver was behind the wheel of the Model 3. As it turned out, with some small improvements, the non-Performance Long-Range RWD variant of the compact electric car can pack a mean wallop.

As noted by the team’s post of their Model 3 build in the Tesla Motors Club, the team opted to improve the car’s performance through several modifications to the vehicle. After taking delivery of the electric car on May 30, the team began to work on maximizing the Long Range RWD Model 3’s performance on the track. First off, the team installed Advan RGIII 19×9 +25 and 19×10 +35 tires, which are designed to improve the Model 3’s grip and handling. The team’s suspension arms, coilovers, and custom hub centering rings were also installed on the vehicle. Lastly, the team opted to upgrade the vehicle’s brakes, after a run at the track proved too much for the Model 3’s stock brake kit. With its wide tires, lowered stance, upgraded suspension, and better brakes, the Model 3 was ready for some competition.

As could be seen in a recently uploaded YouTube video from auto enthusiast Edmund Manasan, Sasha Anis’ Tesla Model 3 ultimately became a wild card in the Canadian Sport Compact Series, at one point ranking Number 5 from a list of 120 vehicles according to lap times. The Model 3 was the odd one out in the track meet, considering that it was an electric car racing beside vehicles that were heavily tuned for the track. Apart from this, the weather also proved foul, with incessant rains making the race course incredibly slippery.

As noted by the professional driver, however, the Model 3 handled the wet track without any difficulty. For the Time Attack event, Sasha noted that the Model 3 ended up dominating several vehicles, ultimately ranking first after beating a Porsche Boxter and a Mazda RX-8. A picture of the compact electric car parked proudly behind it’s award was shared by the Model 3’s driver.

It is pertinent to note that the Model 3 that won the CSCS Time Attack event was not the Performance version of the compact electric car. Instead, it is just the Long-Range RWD variant of the vehicle with some improvements to its suspension, brakes, and wheels. Just recently, Elon Musk shared an image of the first Tesla Model 3 Performance Dual Motor rolling off Fremont’s new assembly line. The Model 3 Performance, which has a 0-60 mph time of 3.5 seconds, a top speed of 155 mph, and a range of 310 miles per charge, is designed to compete with the best performance-oriented vehicles on the track today, such as the BMW M3. In a Twitter announcement, Elon Musk noted that the Model 3 Performance would be roughly 15% faster than the BMW M3 on a track.

Watch the Model 3’s winning Time Attack run in the video below.