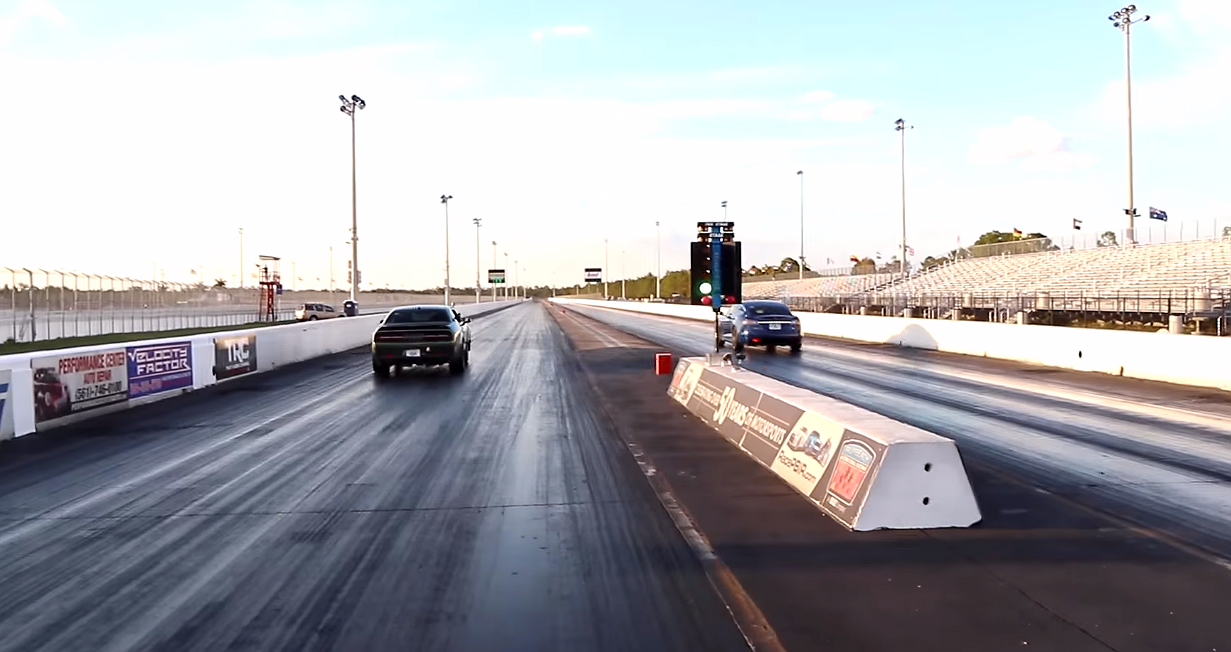 When the Tesla Model S P100D first dueled the Dodge Demon in a street race, the electric car completely decimated the gas-guzzler after an ill-advised donut-making session from the owner of the ICE monster. When the Demon came back for a rematch with its OEM tires, it still proved inadequate to topple the full-sized luxury family sedan. Now, the Dodge Demon is back once again — this time with all of its bells and whistles — in a third attempt at beating the Model S P100D.

The latest bout between the two American-made cars was recently uploaded by YouTube’s DragTimes, which also covered the first two races of the vehicles. As noted by Brooks, the owner and host of the channel, the Dodge Demon owner finally received the “Demon Crate” — a set of equipment that is designed to maximize the racing potential of the muscle car. Thus, unlike its first two matches with the Tesla, the Demon, at least this time around, was as prepared as it could be.

Equipped with the contents of the Demon Crate, the hulking muscle car’s 6.2-liter Supercharged V8 engine was boosted to 840 hp, thanks to a Race ECU and a Race Air Filter. A pair of skinny front-runner drag wheels and Mickey Thompson slick tires were also installed. Last but not least, the Dodge Demon was loaded with 100 octane racing fuel. Brooks noted, however, that the Demon proved to be so hungry for gas; they had to tow it to a gasoline station because it ran out of fuel before it could race the Tesla Model S P100D.

In stark contrast to the Demon’s setup, the Tesla Model S P100D was completely stock. Thanks to its dual electric motors, the all-electric family sedan is able to produce 920 ft-lbs of instant torque and 588 hp to its wheels. These, of course, make the P100D a formidable force on the drag strip.

So how did the 3rd rematch between the gas-guzzling muscle car and the all-electric beast go? Far better for the Demon, actually, though it was still not quite enough to soundly beat the Model S P100D.

The two cars settled their score in two quarter-mile races. During the first race, the two vehicles were neck-to-neck, with the Demon finally getting its first win over the P100D with a .01-second lead over the family sedan. On their second bout, however, the Tesla came back with a vengeance, shooting off in front of the Demon and keeping its lead just long enough to finish the quarter-mile .08 seconds faster than the gas-guzzler — a wider margin than the Dodge’s lead in the first race.

Considering that the Dodge Demon was designed to dethrone the Model S P100D as king of the quarter-mile, the third rematch between the two vehicles was the best one yet, with the Demon Crate really boosting the ICE monster’s performance on the drag strip. Based on the results of the race, however, the added boost from its new equipment did little to establish its place in the short line of vehicles that have soundly defeated the Tesla Model S P100D in the quarter-mile.

Watch the Tesla Model S P100D take on the Dodge Demon for the third time in the video below.