British racing driver and former Top Gear and Fifth Gear television presenter Tiff Needell recently got behind the wheel of the Electric GT’s Tesla Model S P100DL race car. In a video uploaded on YouTube’s LoveCars channel, the former race driver provided several compelling insights about the vehicle, including its handling, its speed, as well as its areas for improvement.

Tiff’s test drive of the Electric GT’s P100DL race car was held at the Circuit de Barcelona-Catalunya, a track famed for hosting the Spanish Grand Prix and the MotoGP. The track, which is 2.892 miles long, features 16 turns including an iconic straight stretch where vehicles can achieve top speed. According to the veteran race driver, the Model S P100D featured impeccable handling and aerodynamics that simply allowed the vehicle to stick to the road despite him performing aggressive driving maneuvers. 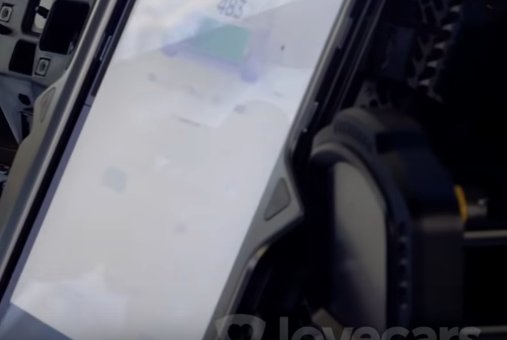 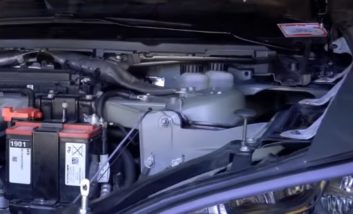 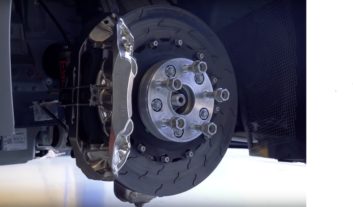 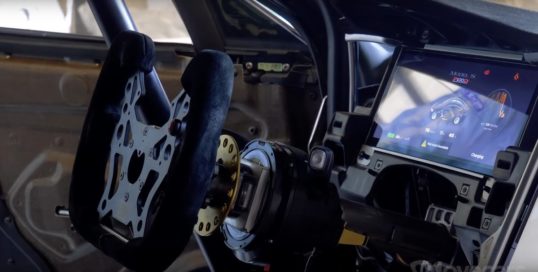 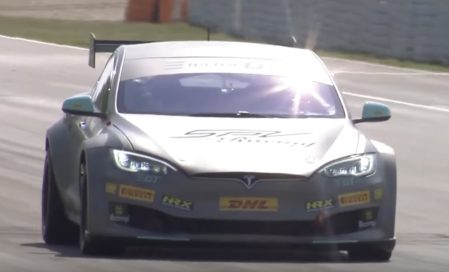 As noted by auto journalist Bozi Tatarevic on Twitter, several scenes of Tiff’s Electric GT test drive video revealed interesting details about the modified electric car. Apart from stripping the car of its interior and fitting a widebody kit made of flax fiber composite to reduce the vehicle’s weight by 1100 pounds, several aspects of the race-ready Electric GT Model S P100D stood out. As noted by Tatarevic, the Tesla race car’s door handles are permanently out, which likely helped save weight on the vehicle. An error displayed on the driver’s console pertaining to the electric car’s Air Suspension also suggests that the vehicle is equipped with an aftermarket coilover setup.

The Model S P100D’s performance brakes were further replaced with larger Alcon brakes. As noted by Tatarevic in his observations on Twitter, the rotor hat on the Electric GT race car’s brakes combines a wheel spacer. The hood of the vehicle is canted as well, likely to aid the electric car’s cooling systems. Brief shots of the vehicle under the hood seemingly reveal that Electric GT might have also modified or replaced the brake master cylinder for the vehicle. Inside the cockpit, a racing ECU could be seen installed beside the P100D race car’s media control unit.

As impressive as the Electric GT Model S P100D was on the track, however, Tiff Needell ultimately noted that the vehicle’s battery still showed some heating issues, as revealed by the Model S’ systems throttling performance after 1.5 hot laps around the Barcelona track and fans being directed towards the vehicle’s battery pack after run. The veteran racing driver stated, however, that if Electric GT can find a workaround with the Model S’ battery heating issues, the racing series could very well be successful.

While the Electric GT has chosen the Model S P100D as its vehicle of choice for its inaugural season later this year, another Tesla vehicle is steadily gaining reputation on the track. Just recently, a non-Performance Long Range Model RWD Model 3 with aftermarket suspension and brakes won the Canadian Sport Compact Series Time Attack series, defeating a Porsche Boxer and a Mazda RX-8 to claim the title. During the entire event, Sasha Anis, the driver of the vehicle, noted that the Model 3 did not experience any heating problems at all. The Model 3 Performance, which Elon Musk stated would be 15% faster than a BMW M3 around the track, is expected to perform even better during spirited driving.

Watch Tiff Needell’s test drive of the Electric GT Model S P100DL in the video below.