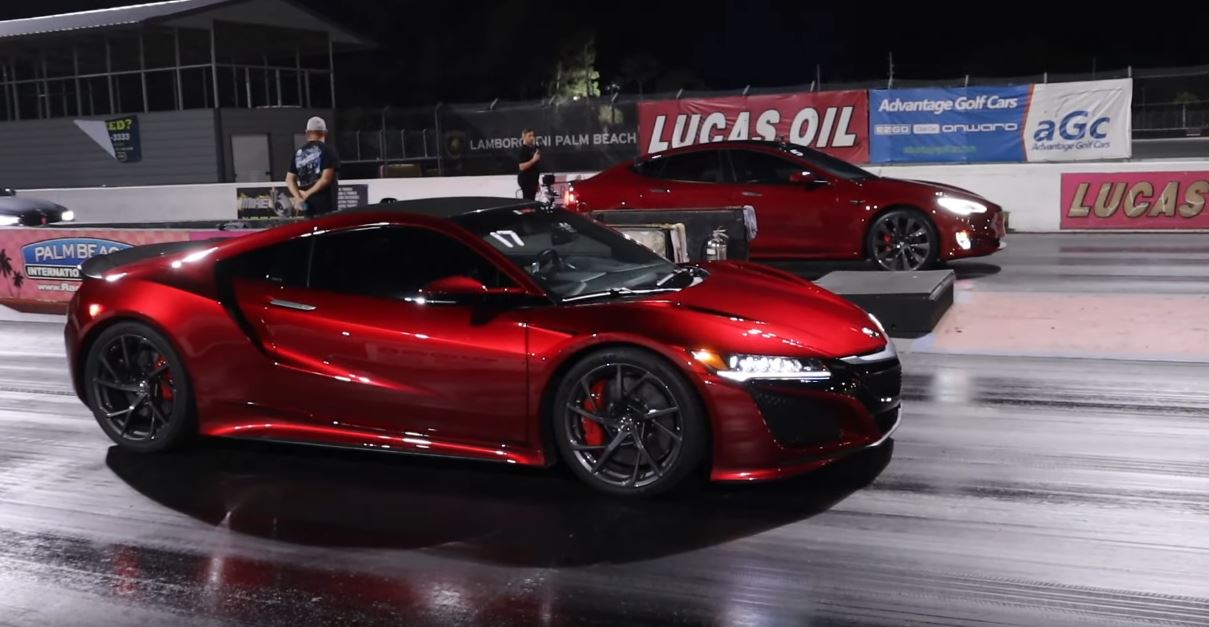 A Tesla Model S Performance recently crushed a modified Acura NSX on a heads-up drag race in Miami, with the former edging the latter in two of three races.

DragTimes pitted the two potent vehicles against each other in a straight-line race. According to Tesla owner and YouTuber Brooks Weisblat, the NSX comes with a hybrid system featuring a 3.5L Turbocharged V6 working in tandem with three electric motors.

The Acura is a $180K modified speed machine with a full Fabspeed exhaust setup that adds roughly 30 HP and Hydra Motor Works Tune that boosts its power by around 40 to 50HP more.  The stock Acura NSX hybrid already boasts 573HP but the one the Miami dragstrip was a potent 700HP beast.

The Tesla Model S Performance, on the other hand, weighs about 4,900 lbs. and the vehicle’s Dual Motor setup produces about 920 lb-ft torque. It retails for about $100K before incentives.

During the first race, the Tesla Model S Performance Raven proved quicker than the modified Acura NSX registering an ET of 10.61 versus the latter’s 10.96 seconds. Tesla’s torque management was evident with the Model S edging the NSX on the 60-foot line and one-eight mile marks.

The NSX beat Tesla’s reaction time on the second race. The Acura was first to reach the one-fourth mile mark after 10.71 seconds while the Tesla Model S Performance Raven came in a blink late at 10.939 seconds.

For the final bout, the Model S Performance Raven dominated the modified NSX hybrid with a quicker launch, crossing the end of the quarter-mile mark with a time of 10.748 against the Acura’s 11.172 seconds.

Acura claims that the NSX engine power combined with the direct electric torque is an absolute game-changer that offers a new kind of dynamic performance not only in terms of acceleration but in steering and braking as well. Despite this, the Model S Performance clearly outclassed its competition. Even before the Raven update that gave the electric vehicle better range, efficiency, Fully Adaptive Suspension, and other optimizations, the Model S already had a potent 0-60mph time at 2.28 seconds on Ludicrous mode.

Perhaps it is not a surprise that the Tesla Model S Raven beat the Acura NSX hybrid on the NSX but it is still very exhilarating to see how it leaves a formidable competition a few cars behind.

Check out the video footage of the Tesla Model S Performance Raven going against the modified Acura NSX hybrid below: