A Tesla Model X 100D recently received a software update that “uncorked” more performance from the luxury all-electric SUV. The update, which was featured in a recent DragTimes video on YouTube, allowed the Model X 100D to attain a better speed and power output compared to before.

In the recently-uploaded video, Brooks, the owner of the YouTube channel, stated that he became aware of the Model X 100D being eligible for an “uncorking” update from the electric car maker through the Tesla forum community. The YouTube host noted that selected Model X 100D vehicles are eligible for the update, depending on the vehicle’s VIN. Upon checking with his contact in Tesla, the drag racing enthusiast was informed that his Model X was indeed eligible for the speed and power update. 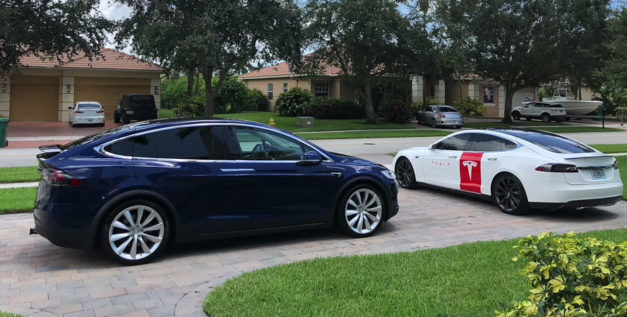 Tesla deployed a technician to upload the update on the Model X 100D. [Credit: DragTimes/YouTube]

Unlike Tesla’s usual over-the-air updates, however, the performance upgrade would require someone from Tesla to work directly on the vehicle. Tesla promptly sent a technician to the YouTube host’s home the day after his request.

After the “uncorking” was completed, the DragTimes host opted to test the vehicle’s performance, in order to compare it to its previous figures. As noted by the Brooks, his Model X 100D was doing 0-60 in 4.6 seconds and running the quarter-mile in 13.2 seconds before the update. The all-electric SUV also had a power output of 380 kW. After the update, however, Brooks immediately noted that the vehicle’s power output had jumped to 409 kW, even with the Model X 100D’s battery at around 50%. With the vehicle’s battery fully charged, the Model X 100D featured a 0-60 mph time of 4.4 seconds and a quarter-mile time of 13.0 seconds.

A comparison of the Model X 100D’s output before and after Tesla’s ‘uncorking.’ [Credit: DragTimes/YouTube]

Tesla introduced improved performance for some of its vehicles last year, with the company upgrading the 0-60 mph time of the Model S and 75, 75D, and 100D last July. The Model X 75D and 100D saw some performance updates as well, with the former’s 0-60 time dropping from 6.0 seconds to 4.9 seconds and the latter dropping from 5.2 seconds to 4.7 seconds. Some vehicles that were sold before the upgraded performance was rolled out also became eligible for a free performance boost, which eventually became known in the Tesla community as “uncorking.” According to Model X 100D owners from the Tesla Motors Club, the performance upgrade was mostly applicable for vehicles that were manufactured before Tesla introduced its improved specs. Vehicles manufactured after Tesla’s announcement of its improved performance are already “uncorked” upon delivery.

If DragTimes‘ recent video is any indication, however, it appears that the Tesla is also “uncorking” the Model X 100D, and while the improvements in the vehicle’s 0-60 mph and quarter-mile times were quite tame, it is still pretty great that eligible owners of the all-electric SUV can have a faster car for free through an on-site software update. The speed at which Tesla deployed a technician to the YouTube host’s home was also quite notable, considering that the upgrade was done just a day after the request was filed — a turnaround time that is sure to get CEO Elon Musk’s approval.