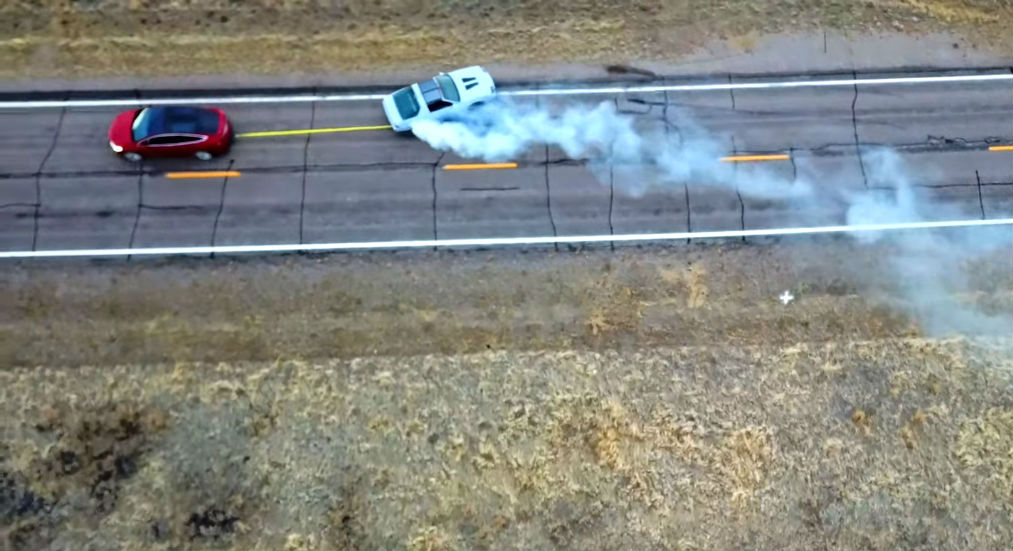 A Tesla Model X recently received a unique tug-of-war challenge from a rather unexpected opponent — a Chevy Camaro 350 IROC-Z. This unlikely matchup between the electric SUV and the old-school American muscle resulted in what could only be a described as a classic beatdown from the Model X.

The clip of the Model X and the Chevy Camaro 350 IROC-Z’s tug-of-war battle was uploaded by the Tesla Trip YouTube channel. According to the channel’s owner, his friend, who owns the Camaro, challenged him and his Model X to a tug-of-war. That’s right. This time around, it was actually the GM-made American muscle car who laid down the gauntlet to the all-electric SUV, and the Model X’s owner was pleased to comply.

The results of the battle between the two vehicles were entertaining, to say the least. As could be seen in the YouTube video, which was filmed from a drone, the Chevy Camaro 350 IROC-Z looked like it tried to get an early jump on the Model X. As soon as the electric car started pulling, however, the muscle car looked like it was being thrown around like a rag doll.

Due credit must be given to the owner of the Camaro, however, as its driver never really gave up. For the entire duration of the tug-of-war, the Chevy Camaro 350 IROC-Z tried its best to break the momentum of the Model X. Tesla Trip’s YouTube video was overlaid with music, but it was not hard to imagine the noise from the screaming Camaro’s tires as they burned out on the road.

Ultimately, the Model X’s victory over the GM-made American classic is due to the electric SUV’s superior power and weight. The Model X, after all, features two electric motors, all-wheel-drive, and a weight that starts at 5,072 pounds at its lightest (for the 2016-era 60D). The Camaro, on the other hand, is a front-engine, rear-wheel-drive car that weighs 3,362 pounds at its heaviest. With this in mind, it would likely take a stationary Model X shifted to Neutral for the Chevy Camaro 350 IROC-Z to actually pull the electric SUV.

As we noted in a previous report, the Model X is capable of some impressive feats of strength. Just last month, Tesla YouTuber Bjorn Nyland posted a video of his Model X P90D pulling a 95,000-pound semitrailer through a snowy road. Nyland also featured his Tesla engaging in a tug-of-war battle against one of GM’s biggest, heaviest creations — the Hummer H2. During its battle with the Hummer H2, the Model X was able to hold its own.

A Model X P100D with Tesla’s latest Autopilot update also recently managed to cross the narrow-laned, nearly 1-mile-long Hook River bridge in Oregon. The electric SUV was able to cross the structure without disengaging Autosteer or requiring any intervention from its driver.