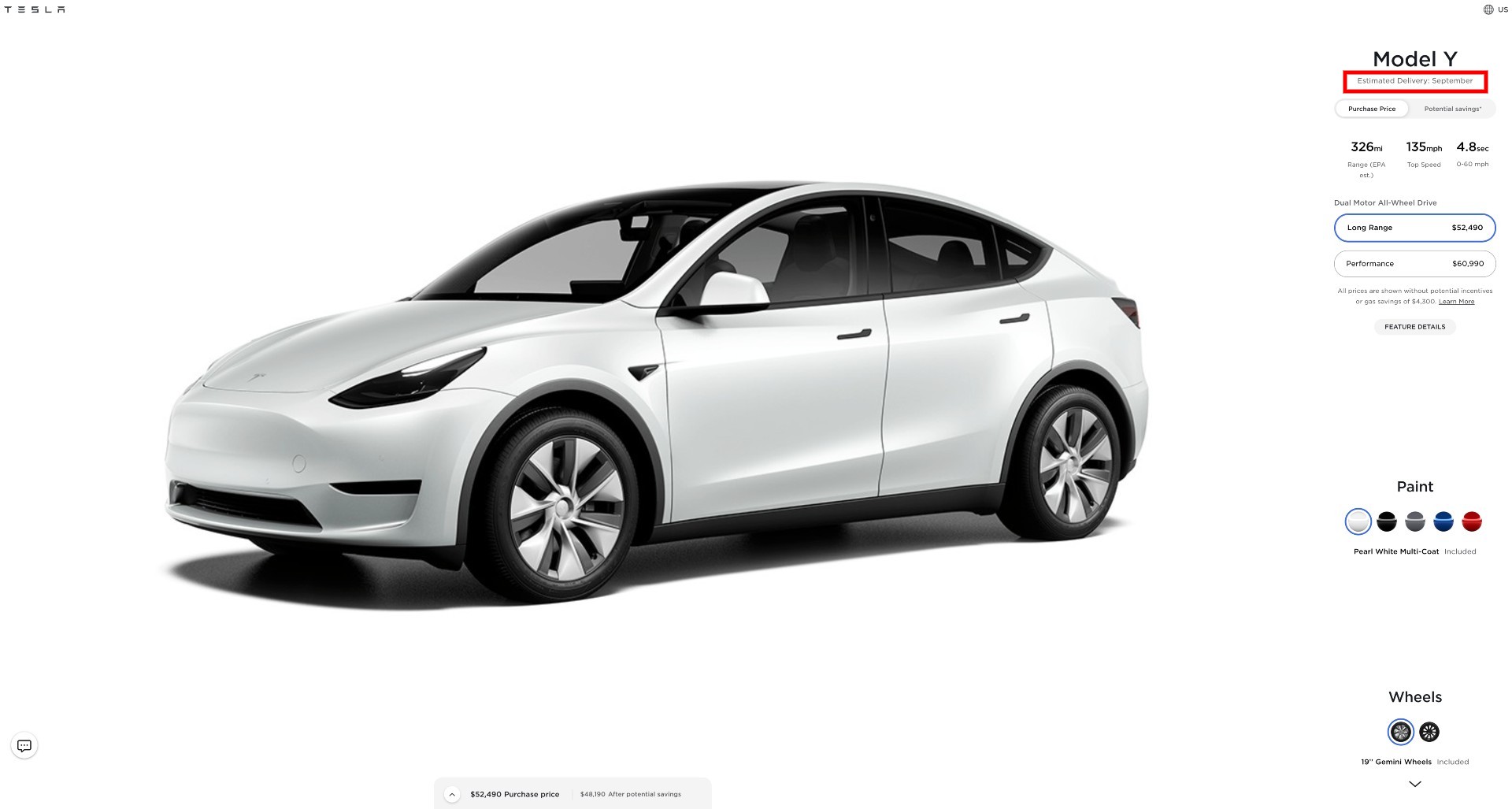 The demand for the Tesla Model Y Long Range variant is skyrocketing as the company now outlines the soonest possible date to take delivery in September, meaning the vehicle is nearly sold out in Q3, even though it is still Q2.

As Tesla continues to ramp up its manufacturing efforts for all of its vehicles, the Model Y is the main focus of the automaker as it expands into new regions. In Austin at Giga Texas, the Model Y and the Cybertruck will take center stage when the facility begins manufacturing the vehicles by the end of 2021. This plan is reflected with the Model Y in Europe, where Tesla’s first Gigafactory on the continent in Germany will manufacture the Model Y straight out of the gate later this year.

However, demand is becoming a bit overwhelming for Tesla as it aims to complete two new factories by the end of 2021. The company’s cars are becoming so popular in so many regions that delivery dates are becoming more prolonged, meaning the need for additional production facilities is becoming more apparent as the transition to sustainable energy continues to leap forward.

It was hinted in early May that Tesla had already sold out of Q2 production volume because of increasing demand. While that is still an amazing accomplishment, Tesla is already starting to sell out for the next quarter with at least one of its cars. The Model Y Long Range is proving to be Tesla’s biggest seller, it appears, as the company is estimating the earliest delivery date will be September, the final month of 2021’s Q3.

The demand has led to Tesla increasing the prices of the Model Y by $3,500 so far this year, after cutting the cost of the car significantly in February. Tesla has avoided encountering severe problems due to the global chip shortage. Still, demand and some parts shortages have resulted in Tesla hiking the prices of its two mass-market vehicles in 2021.

Tesla has made several changes to the Model Y this year, including removing a lumbar-support option in the passenger’s seat. One of the biggest changes, however, is Tesla’s removal of radar equipment in the Y and the 3, a move that Tesla has long considered in its quest for Full Self-Driving.

Nevertheless, the demand for the Model Y is skyrocketing based on recent registration figures. The Model Y overtook the Model 3 in April, according to the EV Sales Blog’s Global sales figures. It sold 16,232 units compared to the Model 3’s 14,980. The Model 3 retained the title of most popular EV in 2021, but the Model Y sits in third, just behind the Wuling HongGuang Mini EV from the GM-SAIC-Wuling venture in China.

The Model Y was the first vehicle in Tesla history to be profitable in its first quarter of production. The demand for the Model Y and its evident growth through sales figures from various outlets bodes well for Tesla’s financials. The company will aim for its eighth-consecutive profitable quarter when it reports its earnings sometime next month.