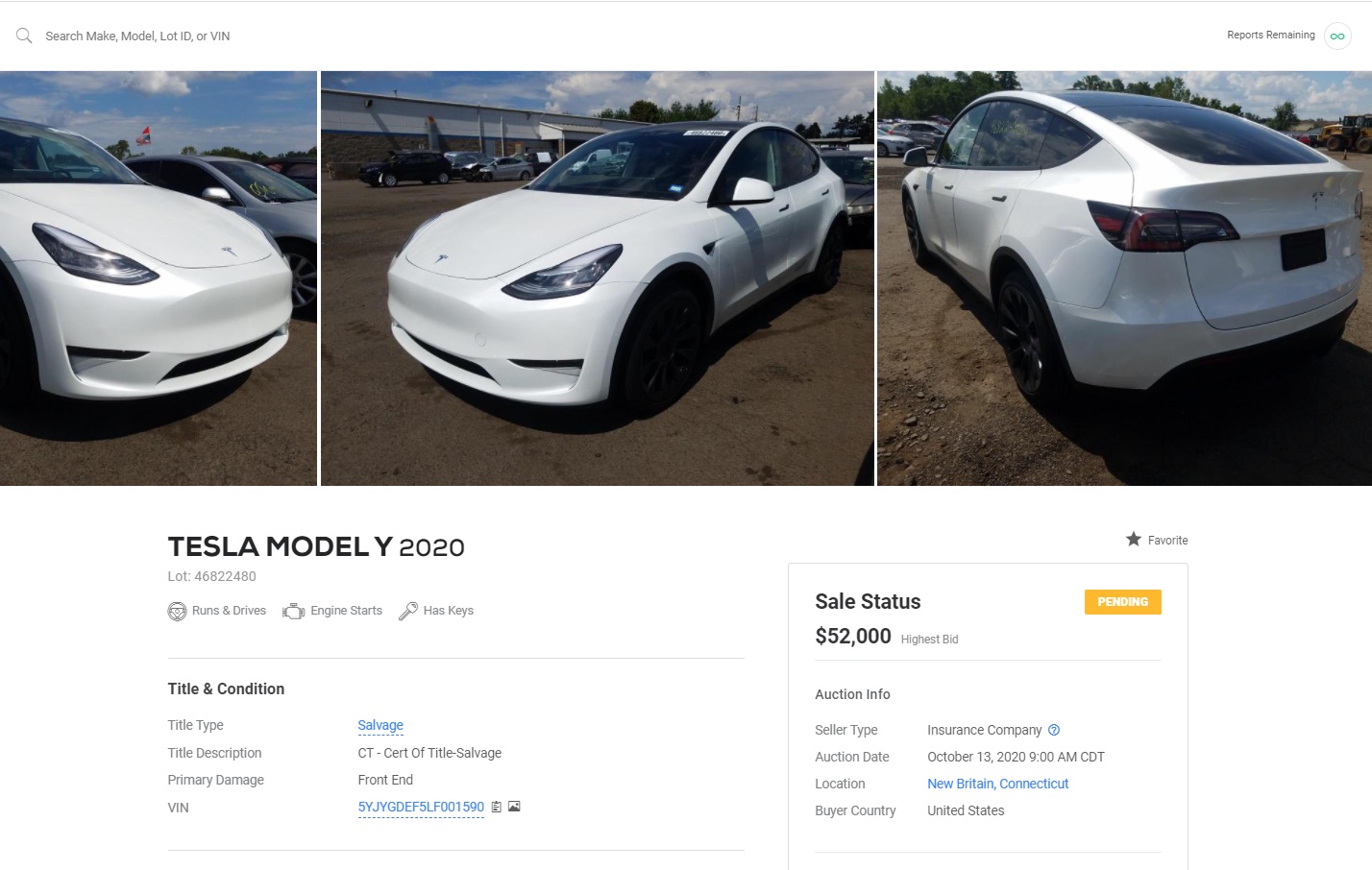 Tesla may be ramping its production and deliveries to record levels this fourth quarter, but it seems that demand for the company’s electric vehicles is still outpacing supply. This is especially evident with the Model Y, whose salvaged title units appear to be selling at prices that are close to, or even more expensive, than their brand new counterparts.

A vehicle with a salvage title indicates that the car in question has been damaged and is considered a total loss by an insurance company. While most Teslas that are sold with salvage titles are heavily damaged, some cars offered by platforms such as AutoAuctions.io appear to have relatively minor damages. These vehicles, as it turns out, still end up fetching premium prices.

A salvage title Tesla Model Y with front end damage from New Britain, Connecticut, for example, was recently marked as sold in AutoAuctions.io. Granted, it appeared to be one of the least-damaged salvage title vehicles on the platform, but as of yesterday, the damaged all-electric crossover had already reached a bid of $52,000. That’s higher than the price of a brand new Model Y Long Range AWD, which starts at $49,990.

Purchasing salvage title vehicles is always a risky affair, considering that the cars had already been damaged. Buyers who purchased and repaired salvage title Model S and Model X, for example, have reported that their vehicles ended up having their Supercharging capabilities disabled overs safety reasons.

Granted, there is potential value in purchasing a salvage title car, but this is typically due to the vehicles being priced far lower than their brand new counterparts. With this in mind, it is simply remarkable that some car buyers are willing to pay brand new prices for a Model Y that has already been declared a total loss.

This, if any, hints at the strong demand for the all-electric crossover, which is so far only being produced in the Fremont Factory. So far, Tesla’s online configurator lists the Model Y’s estimated delivery time to be around 4-8 weeks, still well within the fourth quarter.

Teslas are known to hold their value longer than other electric cars in the market. A recent study from car search engine iSeeCars.com, which analyzed over 6.9 million vehicle sales over the past three years, found that the Model 3’s resale value is five times better than the industry average.

The Model S and Model X are in the same vein, holding their value more than their competition from legacy automakers. Considering the Model Y’s prices in the salvage market, the all-electric crossover may prove to be just as resilient as its stablemates when it comes to holding its value over time.