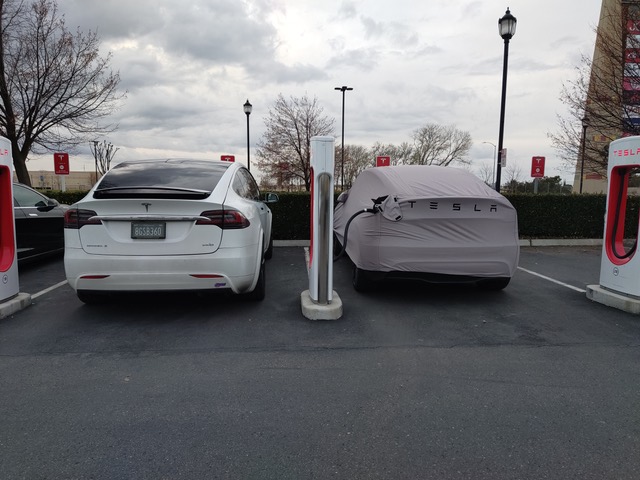 Tesla fans and future owners of the Model Y cannot help but think about how the upcoming all-electric crossover compares in size versus the flagship Model X SUV and the mass-produced Model 3 sedan. While recent sightings of the upcoming vehicle have given the EV community a general idea, the latest snapshots of a Model Y prototype parked next to a Model X in California just helped paint a clearer picture.

The anonymous tipster spotted a Model Y parked next to a Model X at the Manteca Supercharger, roughly 55 miles east of Tesla’s Fremont factory in California and a charging stop near the main corridor between San Francisco to Los Angeles.

The Model Y was covered in tarp when it was photographed, but one could see that it was just as tall as the Model X. A recent sighting of the Model Y in Mountain View, California  revealed that the crossover’s height is about 65 inches. The Model X, on the other hand, has an overall standard height of 66 inches but can vary depending on the air suspension height setting. The ground clearance of the Model X ranges between 7 and 9 inches.

In the latest image showing the Model Y next to a Model X, the difference in width between the two vehicles was quite evident. The latter looks heftier than the former as the Tesla flagship SUV has an overall width of 89.4 inches with the side mirrors included, or 78.7 inches when the mirrors are excluded.

These recent sightings are quite encouraging for customers looking to purchase the Model Y. As the vehicle closes in on its production date, it is starting to become evident that the Model Y offers a lot of space for its price. This could make the vehicle extremely popular for buyers, as it is essentially an almost Model X-sized crossover at a price that’s just slightly above the Model 3. That’s a very good deal, and it would allow it to undercut rivals from more experienced carmakers, such as the Jaguar I-PACE and the Audi e-tron.

It is also interesting to see how the Model Y stacks up in height and width compared to the Model 3, and this photo shared by @Teslaincanada via Twitter has provided a good idea how the bigger crossover looks when it is alongside the midsize sedan.

The Model Y is expected to start production in Fremont by Summer this year and Tesla CEO has also formally launched the Model Y program at Gigafactory 3 in Shanghai during the first public deliveries of the Made-in-China Model 3. Gigafactory 4 in Germany will also start its operations with the production of the Model Y, which will likely be distributed across European markets.

The Model Y will come in several variants and will have enough space for 7 adults. Tesla’s electric crossover will start at $48,000 with the top-tier going for $61,000 before potential incentives and options.