A recent Tesla Model Y sighting has provided what could very well be the vehicle’s best size comparison yet, with the all-electric crossover being parked beside a Mercedes-Benz GLC 300. The Model Y in question was spotted in Tesla’s Fremont factory, where the first builds of the vehicle are being manufactured ahead of its initial deliveries that are now scheduled to take place on Friday, March 13.

The video was made by YouTuber TESLANA, who noticed a Midnight Silver Metallic Model Y in a parking lot next to a Mercedes-Benz GLC 300 4MATIC SUV. The two vehicles sitting next to each other gave a great size comparison for the Model Y as it was next to one of the more spacious midsize SUVs available on the market. 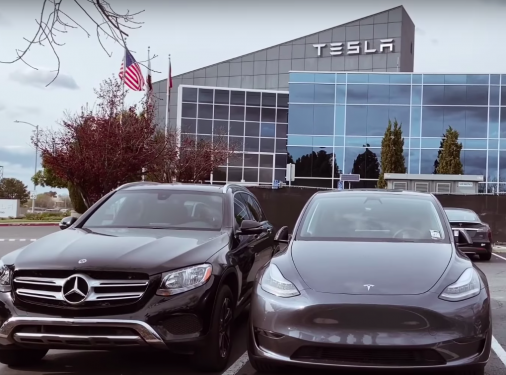 A look around the two vehicles show that the while the Mercedes-Benz GLC 300 has a bit more ground clearance than the Model Y, the all-electric crossover seems to have a much larger cabin. This is evident in TESLANA’s video, which showed that the Model Y’s cabin extends further into its hood compared to the GLC 300. Such a design should provide a more spacious cabin for passengers.

First impressions of the Model Y’s size compared to other Tesla vehicles were captured by Jason Yu, who posted side-by-side photos of himself for enthusiasts to gain an idea of how the new car compares to the company’s other electric vehicles.

The Model Y has solidified itself as one of the most popular electric vehicles Tesla has ever released simply because of its mass appeal, with Musk expecting the vehicle to surpass the popularity of the Model 3, X, and S combined. The crossover market has been booming, and the Model Y offers multiple affordable and spacious options for mainstream consumers.

Tesla will begin delivering the Model Y to customers on Friday, March 13. Two variants, a Long-Range configuration capable of 315 miles per charge and the Performance trim, are currently available for purchase. The Fremont factory is responsible for building all Model Ys at the current time, though CEO Elon Musk announced the company would be scoping out locations for a new Gigafactory in the Central United States that would be responsible for producing the Cybertruck and Model Y for East Coast customers.

Watch TESLANA’s size comparison between the Tesla Model Y and the Mercedes-Benz GLC 300 below.