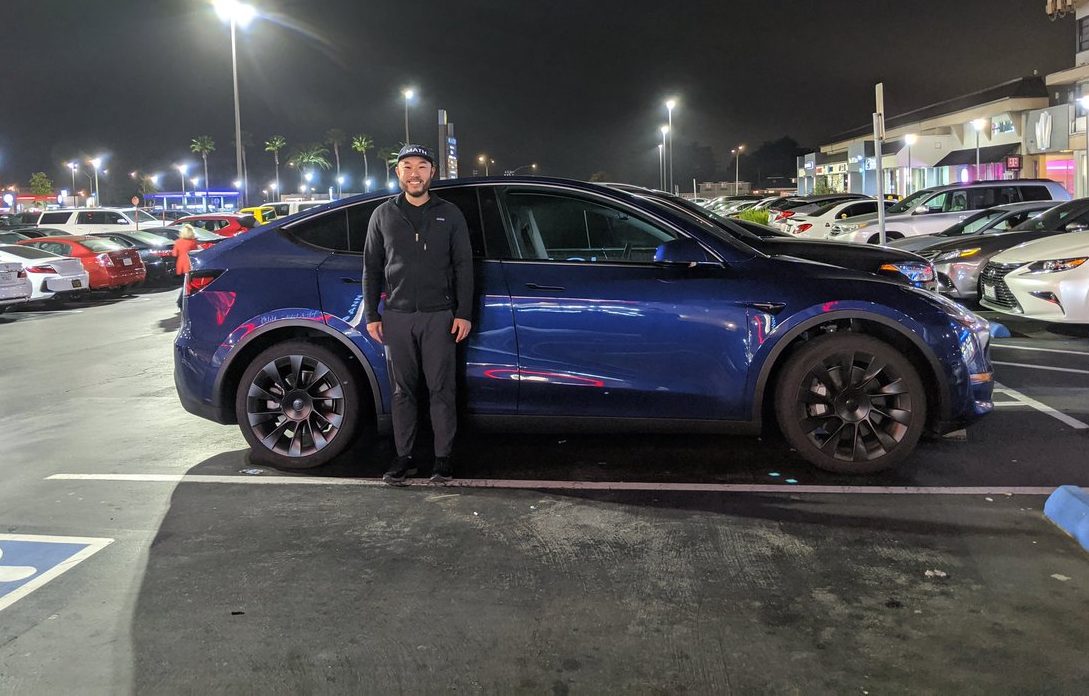 Tesla fan’s “selfie” with Model Y vs. Model 3 vs. Model X is the best size comparison yet

A new photo of a Tesla Model Y with a person standing beside it is the best look yet at how the all-electric crossover stacks up in height, and all-around size when compared to the Model 3 sedan and Model X SUV.

Jason Yu snapped a photo of himself standing directly next to a gorgeous Deep Blue Metallic Model Y that he spotted at the Westlake Center in Daly City, California. Standing just over 5 foot 7 inches tall (170 cm) plus an additional .75 inch from the height of his shoes, according to Yu, the Model Y looked closer in size to Tesla’s Model X than its sibling Model 3.

Tesla has not published the dimensions for the Model Y, only noting that it is approximately 10% larger than the Model 3. However, a recent sighting revealed that Model Y has a height of 62.5 inches (158.8 cm). By comparison, Tesla Model 3 has a height of 57 inches (144.8 cm) and appears notably smaller when compared against Yu’s stature.

Yu notes that he was standing 1 inch away from the vehicle and wearing identical shoes in both instances of the photo.

While Yu appears significantly taller than the height of the Model 3, another selfie taken with a Model X tells a different story.

Tesla’s flagship Model X is the company’s largest vehicle to date that’s in production. Standing at 66.3 inches in height (168.4 cm), Model X isn’t much taller than the Model Y with 20″ induction wheels that was captured by Yu. This doesn’t come as much of a surprise, considering both Model X and Model Y are available in a 7-seat configuration with three rows of seating. In both vehicles, the third row of seats can be folded down to create an expansive rear trunk space. A recent sighting of a Model Y reveals a rather large rear cargo space.

Alright, here is a comparison of me standing next to a Model Y vs a Model X. If you want to see me stand next to another vehicle with my yang gang hat, let me know. #ModelY #ModelX #YangGang @Tesla https://t.co/nfQOVjJqaH pic.twitter.com/7NqDxowVKD

Tesla is set to begin first Model Y deliveries to customers as early as March 15. Available in both a Long Range configuration that’s capable of 315 miles per single charge and a 280-mile Performance variant, Tesla’s all-electric crossover is expected to be the company’s biggest seller to date, besting Model 3 in popularity.

The Elon Musk-led electric car company is projecting over 500,000 vehicles delivered in 2020, helped by increasingly better production efficiencies, streamlined vehicle design, and plans to continue Gigafactory deployments across the world.

Tesla fan’s “selfie” with Model Y vs. Model 3 vs. Model X is the best size comparison yet