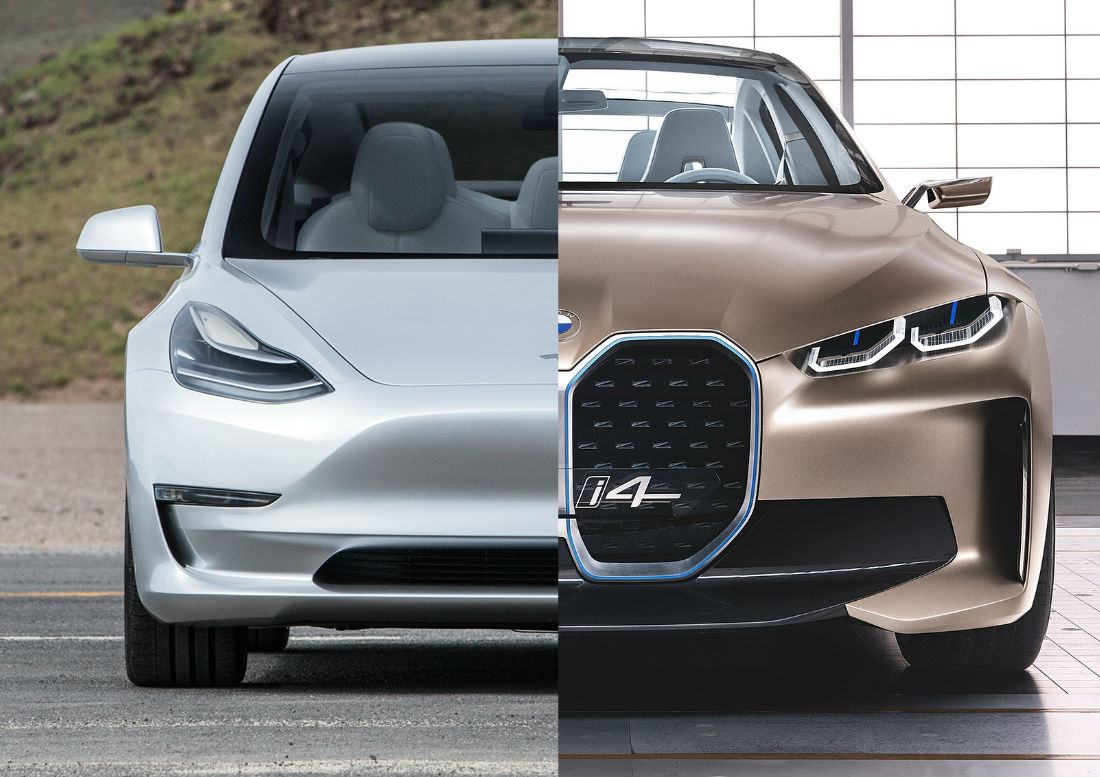 Tesla Model 3 vs BMW i4: How hubris is killing a potential ‘Tesla Killer’

Recently, BMW took the wraps off yet another one of its concept electric vehicles, the i4 sedan. The BMW i4 is poised to rival the Tesla Model 3, an electric car that is so disruptive, it is shaking up the midsize high-performance sedan market. Unfortunately for the German carmaker, one has to wonder if BMW’s efforts with the i4 are simply far too late.

Behind the possible clash between the Tesla Model 3 and the BMW i4 is a history that spans years, all the way back to 2013, when Tesla was just starting the production of its flagship Model S and the German automaker was coming up with the i3. But despite the two vehicles being all-electric cars, they could not be any more different.

Tesla designed the Model S as a sedan that can take on the Mercedes-Benz S-Class, and it has the looks, range, and performance to match. BMW, on the other hand, designed the i3 like a novelty vehicle, with a carbon fiber body, limited range, and performance that’s at home in inner-city streets. This distinction between the Model S and i3 foreshadowed the future of the two companies’ electric vehicle programs, as Tesla would follow up on the Model S with the Model X and Model 3, and BMW would end up being stuck with the i3 until today.

Yet despite having just one key pure electric car in its lineup, BMW has put a lot of effort in convincing the auto industry that it is taking electric vehicles seriously. Concept after concept was unveiled to much fanfare, but so far, none of the company’s fancy vehicles like the iNext have a legitimate release date. While this was happening, Tesla was growing, refining its processes, and making its vehicles like the Model 3 even better.

The Model 3 may not be the quickest vehicle in Tesla’s lineup, but it is the most disruptive. Priced aggressively and designed to take on the most established premium midsized sedans like the BMW 3-Series and the Mercedes-Benz C-Class, the Model 3 was poised to make waves, and make waves it did. The Model 3 Performance, the most powerful of the lineup, even managed to beat the legendary BMW M3 on the track, hands down. The idea of an electric sedan outperforming the M3 on the track would have probably warranted mockery had it been suggested during the days of the Model S and i3, but it is a painful truth that the German automaker has to swallow now.

It was not long before it was evident that the i3 won’t be enough to take on vehicles like the Model S or Model 3. Yet, BMW seemed to still take its sweet time developing its electric cars, with some executives even adopting the narrative that there is not enough demand for pure EVs anyway. It is then unsurprising that today, Tesla’s lead in electric mobility has become so stark, it is almost embarrassing for some legacy automakers like BMW.

When BMW announced the unveiling of its i4 concept on Twitter, the electric vehicle community immediately poked fun at the automaker for showing off yet another concept car. The car had impressive specs, though, with BMW stating that the i4’s single motor will generate about 530 hp, about on par with one of the automaker’s V8 engines. The i4 is pretty quick too, with a 0-62 mph time of about 4 seconds. Range-wise, estimates point to the i4 having about 270 miles in between charges.

While these specs are decent and a notable improvement over the i3, the i4 does show several signs suggesting that BMW is still not going all-in on electric cars. A look at the vehicle’s exterior alone shows that the i4 is still designed like a conventional car, with a long sloping hood that lacks any sort of frunk due to the space being allotted for electronics. Overall, the i4 boasts an attractive design that would likely end up being a template for the next-generation BMW 3-Series, but a ground-up EV it does not seem to be.

And here lies the issue with BMW so far. It appears that even after years of the i3 never really taking off, the company is still under the impression that it can ride the EV wave with a car that is just adequate in features and performance. Considering BMW’s long history as an automaker, such appears to be a big sign of hubris. And at this point in the EV race, that could be very costly.

BMW is one of three prolific auto houses in Germany, and so far, it is the one that seems to be lagging behind the most when it comes to electric vehicles. Daimler may be seeing challenges with the Mercedes-Benz EQC, but the company has some fallback in the company’s electric trucks like the Freightliner eCascadia, which only has a few rivals like the Tesla Semi.

Volkswagen has adopted a very aggressive strategy with its EV push. So serious is VW with its electric cars that the company’s CEO, Herbert Diess, is pretty much putting his career on the line to ensure that the automaker can roll out a mass-produced vehicle like the ID.3, a car that has the potential to be this generation’s Beetle. And then there’s BMW, still with its concepts, and a Model 3 competitor that is still over a year away at the best case scenario.

The term “Tesla Killer” has become ubiquitous with the number of electric cars that are being developed by legacy automakers. Yet over the years, each and every one of these alleged killers, from the Chevy Bolt to the Jaguar I-PACE, have proven to be incapable of outgunning Tesla’s electric cars in their own game. For the i4 to be a legitimate rival to the Model 3, it must beat Tesla with not just its badge’s pedigree. Otherwise, BMW may end up killing its “Tesla Killer” even before it had a chance to compete, thanks to an EV effort that is uninspired at best.

Tesla Model 3 vs BMW i4: How hubris is killing a potential ‘Tesla Killer’