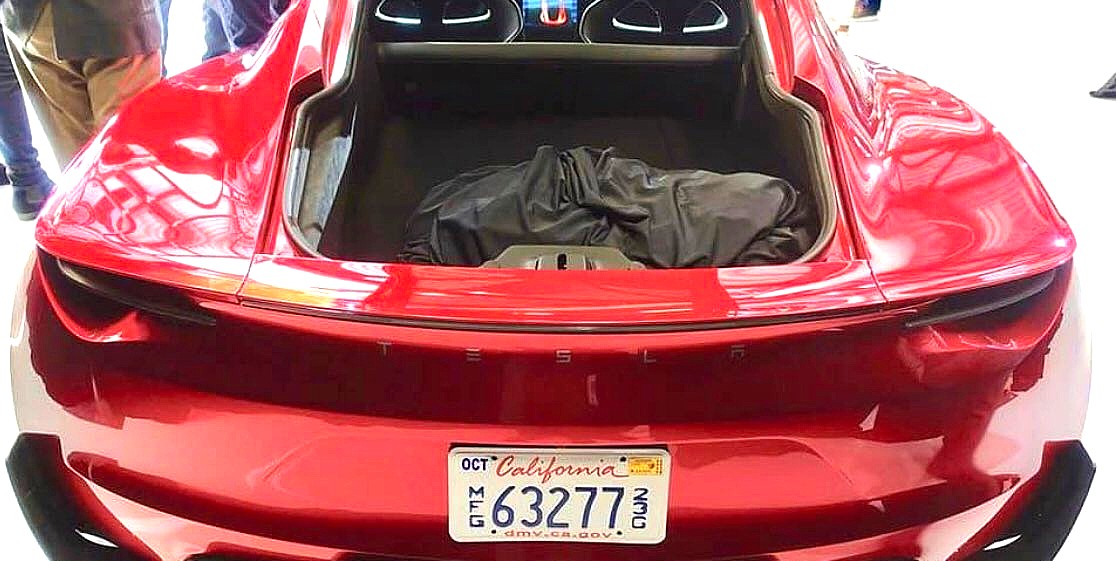 When Elon Musk unveiled the next-generation Tesla Roadster, he remarked that the vehicle will have “tons of storage.” Musk noted that the all-electric supercar would have enough room to transport luggage and up to four people, thanks to its 2+2 seating configuration. Based on an image of the next-gen Roadster’s rear storage area that was recently shared online, it appears that the Tesla CEO’s descriptions are quite accurate.

Tesla brought over the next-gen Roadster prototype on its Autonomy Day event, which was held last week. Attendees of the event were able to get up close and personal with the all-electric supercar, with one investor even sharing footage of the vehicle’s unique finger swipe door lock system. Tesla enthusiast Philipp Sicking, who was also at the event, was able to get a clear image of the all-electric supercar’s rear storage area.

Immediately noticeable from the next-gen Roadster’s trunk is its size. While seemingly shallow, the space at the vehicle’s rear seems to be enough to fit a couple of small suitcases or traveling bags. The rear seats of the Roadster also appear to be designed to fold down when needed, which could give the all-electric supercar even more cargo space. The space on the Roadster’s trunk seems to be comparable to that of the Ferrari F12 Berlinetta, a rear-wheel-drive grand tourer notable for its sizable rear cargo area.

Supercars are known for their notoriously small cargo spaces, mainly due to their usual mid-engine construction. Some companies such as Lamborghini have learned to maximize the available areas under the hood for storage, as could be seen in the reasonably decent frunks of vehicles like the Aventador and the Huracan. Nevertheless, some of the world’s best hypercars have barely any storage space. This is perfectly highlighted by the Ferrari LaFerrari, a hypercar whose frunk is so small; it literally cannot fit a GoPro camera.

Every single vehicle that Tesla designed from the ground up has proven to be disruptive in their own right. From the Model S to the Model 3, Tesla has pretty much operated outside the box when it comes to the design and utility of its vehicles. The next-gen Roadster appears to be no different, as it is a supercar with enough performance to give a “hardcore smackdown to gasoline cars,” all while retaining the utility of a grand tourer. This, of course, blends perfectly with the Roadster’s borderline insane range of over 1,000 km per charge. Taken together, the Roadster’s decent trunk and its incredibly long range can give owners the opportunity to enjoy long road trips without scrimping on luggage.