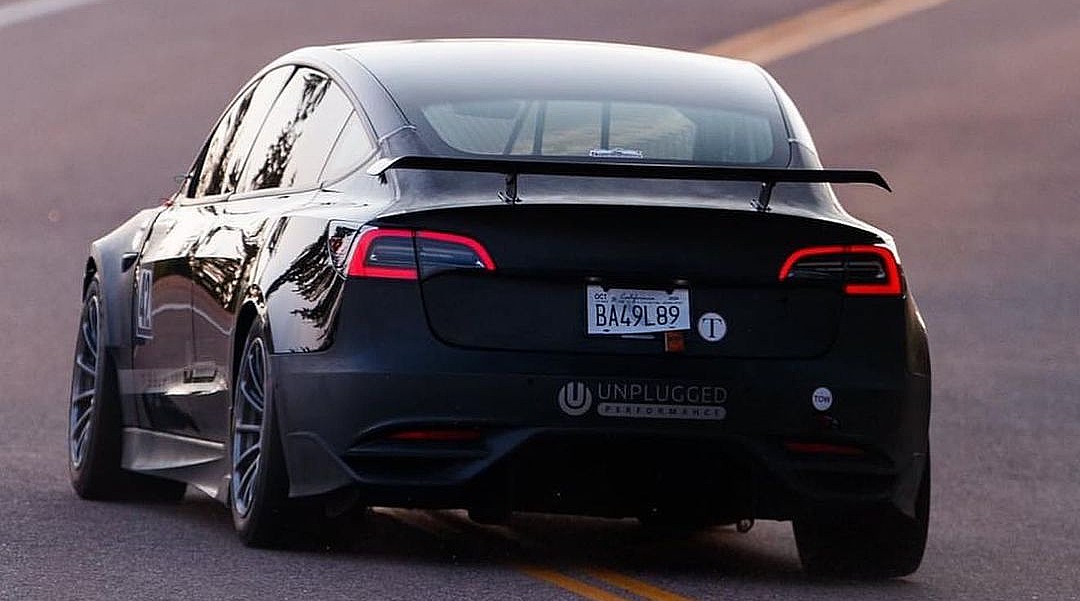 Last August, legendary racecar driver Randy “The Rocket” Pobst, arguably one of the most respected racers in the industry, took his battered Unplugged Tesla Model 3 Performance up Pikes Peak just a few days after crashing spectacularly at the Bottomless Pit. Pobst finished second place at the event’s Exhibition Class, just behind another Model 3 Performance driven by fellow racer Blake Fuller. It was a victory of sorts considering that the Unplugged Model 3 completed the Pikes Peak climb with a bent frame and throttled power due to battery issues. Finishing the race was a feat in itself, But for The Rocket, it was not enough.

Pobst and the Unplugged Performance team are looking to return to Pikes Peak this year, and this time, the veteran racer and the Tesla tuners are determined to accomplish the goal that they were not able to reach last year. This time around, Pobst is aiming to achieve a sub-10-minute run up the treacherous hill. In a conversation with Teslarati, Pobst and Unplugged Performance CEO Ben Schaffer shared some of their plans and hopes for this year’s Pikes Peak attempt and why a Tesla is perfect for such competitive events.

When asked why he is returning to Pikes Peak this year in another Tesla, Pobst explained that electric cars are actually a perfect fit for the dangerous race. Being some of the best EVs in the market today, Teslas are amazingly-suited for Pikes Peak, especially considering that the vehicles’ electric motors provide tons of torque instantly. In a statement, the legendary racer explained why a 10-minute run would be just right for electric cars’ characteristics.

“This event is such an incredible thrill and challenge, and it just happens to be very well-suited to a Tesla and electric power in general. There are three reasons why: one, the flow of electrons is unaffected by the 14K high-altitude lack of oxygen; two, the short 10-minute hill climb is well-suited to current battery technology at full power; and three, the strong low-speed torque, instant response, and no need to shift are all ideal for the 160 turns up that mountain road, especially the many switchbacks,” Pobst said.

During his attempt last year, Pobst remarked that his race-tuned Unplugged Model 3 Performance was among the best cars that he has ever driven. Thanks to its all-electric design and the Tesla tuner’s refinements, the professional racer noted that the vehicle just hugged the road at high speeds. This was proven by the fact that Pobst was actually among the fastest in the entire field prior to his crash, with the humble Model 3 finishing ahead of formidable vehicles like race-spec Porsches.

Another Chance At Making History

For now, neither Pobst nor Schaffer have revealed if they would be attempting the 2021 Pikes Peak hill climb in another Unplugged Tesla Model 3 Performance. When asked about this, the Unplugged CEO stated that the details for Randy Pobst’s racecar this year are still being determined. Schaffer did mention that Unplugged is working on some exciting projects for the Model S Plaid and Model S Plaid+, both for street and motorsports use.

If Pobst and the Unplugged Performance team return to Pikes Peak this year with another Model 3 Performance, however, the racecar driver could very well complete what he set out to do last year and perhaps win the Exhibition Class outright in the process. As Pobst stated himself, the Model 3 Performance is a very fast car, and when it’s tuned for racing, it is a frightening beast of a machine that has the potential to perform close to or at the levels of bespoke racers explicitly created for Pikes Peak. With last year’s experience in tow, Pobst and the Tesla tuner could very well make history this time around.

But this is still just the beginning for Tesla and its future in motorsports. Sharing his thoughts further, Schaffer stated that he hopes to eventually bring the next-gen Tesla Roadster to the treacherous hill climb when the vehicle is released. And with the Model S Plaid and Model S Plaid+ coming this year, the opportunities that exist for dedicated EV tuners and racers are only getting bigger.

“Our goal since 2013 has remained consistent. Unplugged Performance exists to show car enthusiasts around the world how exciting it can be to drive a Tesla. This furthers the Tesla mission and has been our contribution since 2013 as Tesla’s neighbors and friends. Events like this—TeslaCorsa, our Nürburgring activities—and also our street tuning upgrades all are designed to tell that story and to turn petrolheads into EVHeads,” Schaffer said.

Randy Pobst, for his part, is all for this plan. “I’m in!” he responded excitedly to Schaffer’s plans, suggesting that his Pikes Peak attempts in a Tesla are probably only just beginning. In jest, Pobst also suggested that EV advocates and enthusiasts should probably start calling themselves “AMPheads” soon. The electric car movement, after all, is proliferating, and it is only a matter of time before EVs are recognized for being the preferred vehicles in both regular use and in racing. And when that happens, the community of AMPheads, as Randy Pobst has stated, would likely be incredibly vast.