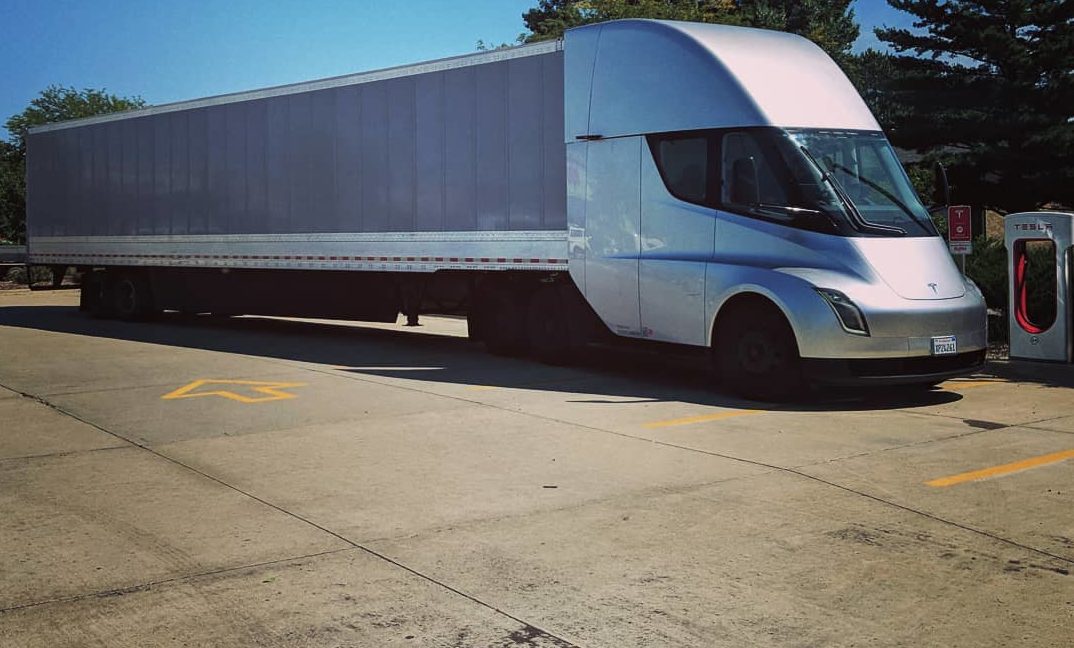 Just a few days after visiting UPS’ hub in Addison, IL, the Tesla Semi has been spotted in Des Moines, IA. The Semi’s interstate travels appear to be part of the company’s continued road tests, which also involve visits to some of its reservation holders.

This is actually not the first time the Tesla Semi was photographed in Des Moines. Last April, the matte black Tesla Semi, an operational prototype that has not been spotted on roads lately, was sighted being transported heading east into I-80 in the Des Moines, IA area. Des Moines hosts the headquarters of Ruan Transportation Management Systems, one of Tesla’s reservation holders for the Semi.

Ruan noted in an announcement back in January that it had been in touch with Tesla about the upcoming all-electric long-hauler even before the Semi was unveiled in November. Over the months leading up to the vehicle’s reveal, Ruan was invited by Tesla to take part in on-site meetings and discussions about the vehicle.

Ruan announced an order of 5 Tesla Semis in January, though it has not provided an update since then. Considering that the Tesla Semi has been making the rounds visiting some reservation holders like J.B. Hunt and UPS, it would not be too surprising if Ruan’s headquarters would soon get a visit from the prototype electric truck as well.

Tesla’s recent visits and sightings are quite notable, in the way that the company appears to be adopting a more open stance about the vehicle. Anecdotes from members of the Tesla community fortunate enough to come across the Semi indicate that the team accompanying the truck are incredibly willing to answer any questions about the long-hauler. Apart from this, the truck’s recent visits to reservation holders like J.B. Hunt and UPS were also a lot more hands-on and interactive. The truck’s recent visit at the Addison, IL UPS hub, for one, even involved rides (and seemingly even test drives) in the vehicle.

Tesla had around 2,000 reservations for the Semi as of the Q1 2018 earnings call last May. The company has not issued an update on the number of pre-orders for the truck since then, though Elon Musk noted during the Q2 2018 earnings call that Tesla is still in the process of improving the vehicle’s capabilities before it enters production.

The Tesla Semi could be the company’s most disruptive vehicle in its lineup, considering that the trucking industry is responsible for the transportation of up to 71% of food, retail goods, construction supplies, and other cargo delivered to customers and businesses every day. The industry is steadily growing as well, with the trucking market generating $700.3 billion in economic activity last year, a 3.5% increase compared to the $676.6 billion it made in 2016.

Just like Tesla’s other vehicles, the Semi boasts impressive specs. The electric truck is powered by four Model 3-derived electric motors, which give it instant torque. The Semi is also rated as a Class 8 truck, and is listed with a 0-60 mph time of 5 seconds flat when accelerating without cargo. The Semi is expected to be released in two variations — a 300-mile short-range variant and a 500-mile long-range version. That said, Elon Musk has noted that the long-range Semi could have closer to 600 miles of range per charge.