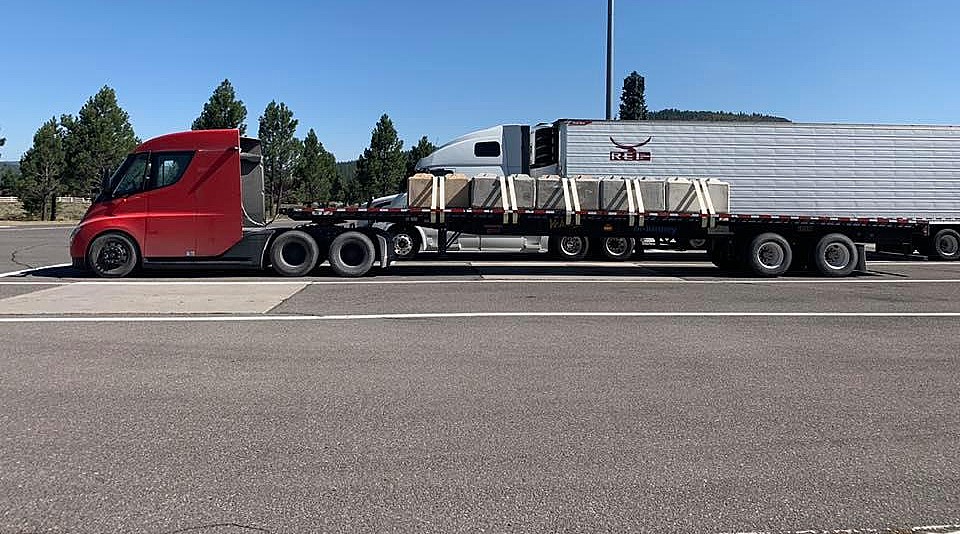 The Tesla Semi was recently spotted by officers of the California Highway Patrol in the Donner Pass area. Images of the vehicle taken by the CHP show the all-electric truck hauling several concrete blocks, as the vehicle continued its real-world testing in the lead-up to its initial production run.

Fortunately, the Tesla Semi’s sighting this time around proved to be a bit more special, as the CHP-Donner Pass officers were able to speak with the upcoming truck’s driver, who was gracious enough to give some details about the vehicle. According to the Semi’s driver, the matte red all-electric truck is currently operating at approximately 75,000 pounds with its trailer and cargo. What’s particularly impressive is that the vehicle is reportedly meeting or exceeding its range estimates despite its heavy load.

“Tesla is out testing the new electric truck tractor. The driver stated the concrete blocks are for testing purposes only. According to the driver the truck is operating at approximately 75,000 lbs and the truck is meeting or exceeding the range estimates. Electric trucks are definitely the future. We look forward to seeing more electric trucks on the road,” the group wrote.

This is not the first time that the CHP shared images of Tesla’s upcoming all-electric truck. Last year, the silver Semi prototype, complete with a trailer full of cargo, was inspected by the CHP at the Donner Pass Inspection Center, which is located just off Interstate 80. The vehicle was met with notable excitement from the group, who noted in a Facebook post that “the future has arrived.” When asked about the inspection, a representative from the CHP-Donner Pass group stated that the Semi was “very easy to inspect” and the vehicle was “very clean.” No violations were found by the CHP during its inspection of the Semi then.

The Tesla Semi holds a lot of potential, particularly as it is a vehicle that can tap into the immensely lucrative trucking market. The Semi definitely has what it takes to cause a disruption in terms of raw specs, considering that the vehicle is equipped with four Model 3-derived electric motors and a range of up to 500 miles. Tesla has continued to make improvements to the Semi since its unveiling too, with Musk stating on Twitter that the vehicle’s range will likely be closer to 600 miles per charge.

The Semi has attracted the attention of several notable businesses, particularly those which are looking for ways to actively reduce their carbon emissions footprint while cutting transportation and logistical costs at the same time. Among the Semi’s reservation holders are PepsiCo, Anheuser-Busch, J.B. Hunt, FedEx, and UPS in the United States, as well as Bee’ah in the United Arab Emirates. Production of the Semi was initially slated for 2019, though Tesla has adjusted this estimate to sometime in 2020.