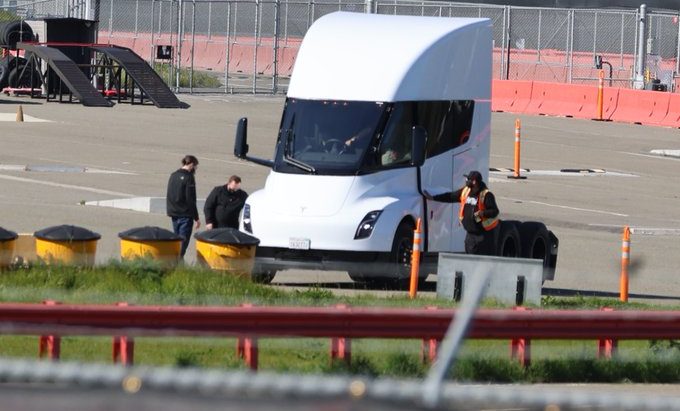 Tesla’s updated Semi prototype has been sighted with a full wind deflector setup while it was conducting road tests around the Fremont Factory. Videos taken of the massive vehicle highlight just how eerily silent the Tesla Semi could be when it is operating.

With its wind deflector installed, the new Tesla Semi prototype looked like a vehicle that’s definitely approaching production. This was highlighted by the Semi’s updated design, which includes larger windows, new tail lights, door handles, and a revamped setup for its equipment at the rear. These changes were initially observed back in February when images and videos of the updated Tesla Semi prototypes were shared online.

What was particularly notable in the recent Semi sighting was the massive vehicle’s noise, or lack thereof. Footage taken near the all-electric Class 8 truck showed that the vehicle made very little sound as it passed by. This was quite impressive considering the size of the Semi, and this is something that would likely be appreciated by residents who will be living along the vehicle’s routes.

Other videos of the Tesla Semi have shown that the Class 8 vehicle could produce a rather audible, futuristic sound, though most of those instances involved the all-electric truck accelerating hard. If the Semi is traveling at a more deliberate pace, as seen in the recent clip from Fremont, it appears that the vehicle would be able to operate very silently.

The Tesla Semi’s quiet operation is one of the vehicle’s most underrated features. The noise pollution generated by traditional diesel and gasoline-powered semi trucks is notable, after all. In the United States alone, residents in places such as New Castle, Delaware, and High Bridge, New Jersey, have lodged formal complaints against the massive vehicles’ noise in the past. Such concerns would likely be a non-issue for a truck like the Tesla Semi.