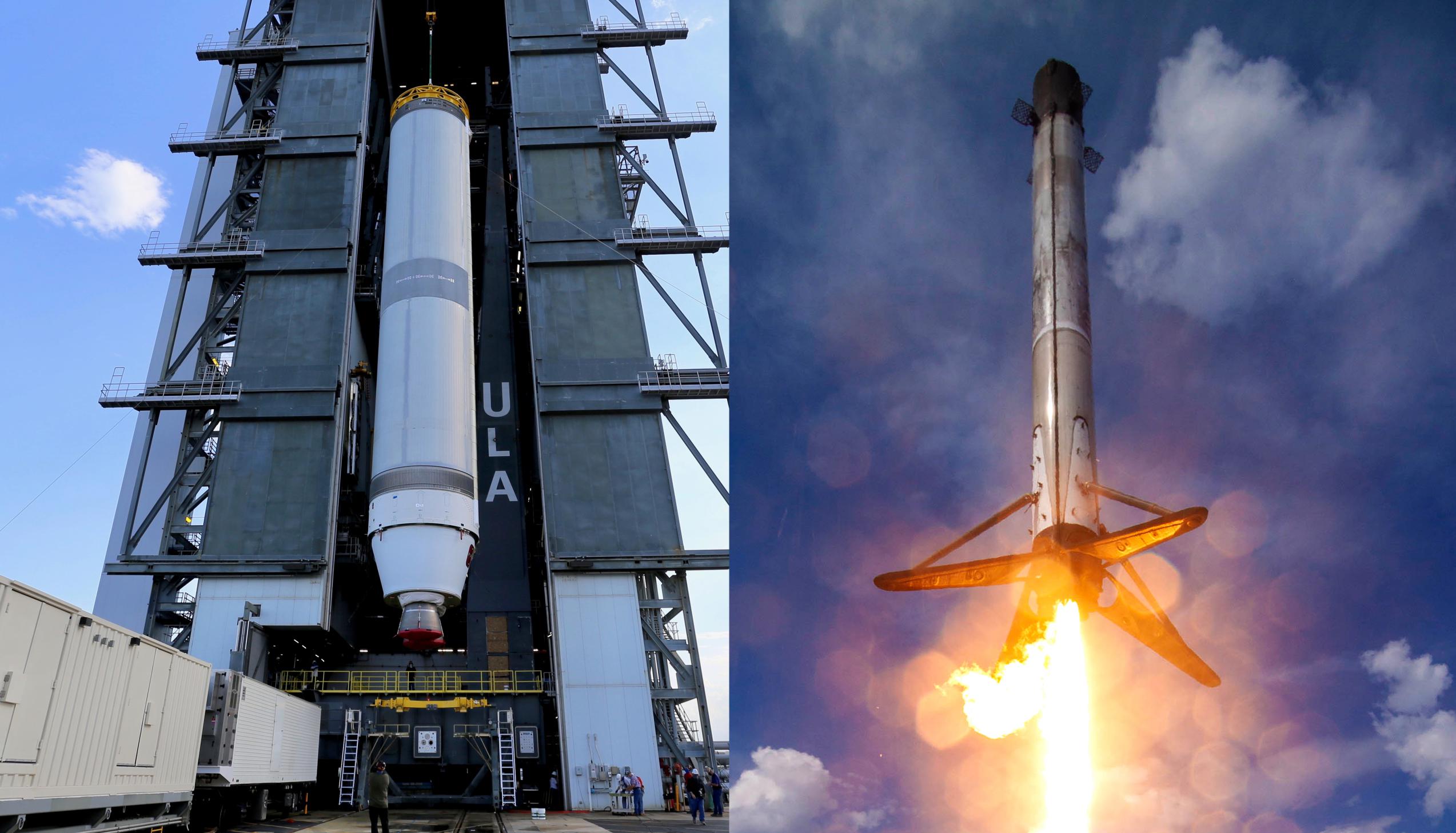 Even with several handicaps in its favor, a recent batch of military launch contractors suggest that ULA's Vulcan rocket will never be able to compete commercially with SpaceX's Falcon 9. (ULA/SpaceX)

The United Launch Alliance’s (ULA) next-generation Vulcan Centaur rocket appears to have made it through what could be described as its first real competition with SpaceX and its Falcon 9 workhorse.

The US Space Force (or Air Force) awarded both rockets two launch contracts each on March 9th, marking the second award under “Phase 2” of a new National Security Space Launch (NSSL; formerly Evolved Expendable Launch Vehicle or EELV) agreement. The culmination of a multi-year competition, NSSL Phase 2 calcified in late 2020 when the US military ultimately chose ULA and SpaceX as its primary launch providers for the better part of the next decade.

The final Phase 2 agreement followed Phase 1, in which the USAF committed up to $2.3 billion to assist Blue Origin, Northrop Grumman, and ULA in their efforts to develop future military launch capabilities. SpaceX submitted a proposal but didn’t win funds. Even though the ULA-SpaceX dichotomy was already a more or less fixed outcome before the competition even began, the US military still managed to dole out almost $800 million to Blue Origin and Northrop Grumman before announcing that neither provider had been selected for Phase 2.

Notably, as part of Phase 1, ULA is on track to receive nearly $1 billion in USSF/USAF aid to develop its next-generation Vulcan Centaur rocket and ensure that it meets all of the military’s exacting, unique requirements. SpaceX, on the other hand, received a sum total of $0 from that opaque slush fund to meet the exact same requirements as ULA.

For Phase 2, the US military arbitrarily split the roughly two-dozen launch contracts up for grabs into a 60/40 pile. Even more bizarrely, the USAF did everything in its power to prevent two of the three rockets it had just spent more than $1.7 billion to help develop from receiving any of those two or three-dozen available launch contracts – all but literally setting $800M of that investment on fire. Short of comical levels of blind ineptitude, verging on criminal negligence, the only possible explanation for the US military’s behavior with NSSL Phase 1 and Phase 2 is a no-holds-barred effort to guarantee that ULA and its Vulcan Centaur rocket would have zero real competition.

The arbitrary 60:40 split of the final Phase 2 contract ‘lot’ further supports that argument. A government agency objectively interested in securing the best possible value and redundancy for its taxpayer-provided money would logically exploit a $1.7B investment as much as possible instead of throwing two-thirds of its ultimate value in the trash. On its own, a block-buy scenario – even with a leading goal of selecting two providers – is fundamentally inferior to an open competition for each of the dozens of launch contracts at hand.

Further, selecting the block-buy option and failing to split those contracts 50:50 makes it even clearer that the USAF’s only steadfast NSSL Phase 2 goal was to guarantee ULA enough Vulcan launch contracts for the company to be comfortable and (most likely) not lose money on a rocket that has yet to demonstrate an ability to compete on the commercial launch market.

Amazingly, despite multiple handicaps in the form of a 60:40 contract split and what amounts to a $1B subsidy that explicitly disadvantages its only competitor, ULA’s Vulcan rocket still appears to be ~40% more expensive than SpaceX’s Falcon 9. In the latest round of NSSL Phase 2 contracts, seemingly the first in which ULA’s Vulcan Centaur rocket was selected, SpaceX’s Falcon 9 received two East Coast launch contracts worth slightly less than $160M, averaging out to less than $80M each.

Outfitted with four of a possible zero, two, four, or six strap-on solid rocket boosters (SRBs), Vulcan Centaur received two launch contracts for $224M – an average of $112M each. Assuming ULA wins exactly 60% (~15) of the Phase 2 launch contracts up for grabs and receives no more than $1 billion in USAF development funding through NSSL Phase 1, some $67 million will have to be added to the cost of each announced Vulcan launch contract to get a truly accurate picture. In the case of the rocket’s first two contracts, the real average cost of each Vulcan Centaur launch could thus be closer to $179M ($112M+$67M).

According to ULA CEO Tory Bruno, both Vulcan missions are to “high-energy orbits,” whereas a USAF official told Spaceflight Now that SpaceX’s two Falcon 9 contracts were to “lower-energy orbits.” In Vulcan’s defense, if Bruno’s “high-energy orbit” comment means a circular geostationary orbit (GEO) or a very heavy payload to an elliptical geostationary transfer orbit (GTO), it’s possible that SpaceX would have had to use Falcon Heavy to complete the same contracts. Against Falcon Heavy’s established institutional pricing and excluding ULA’s $1B Phase 1 subsidy, Vulcan Centaur is reasonably competitive.

Ultimately, even with several significant cards stacked against it, SpaceX appears likely to continue crushing entrenched competitors like ULA and Arianespace on cost while still offering performance and results equivalent to or better than even than their “next-generation” rockets.