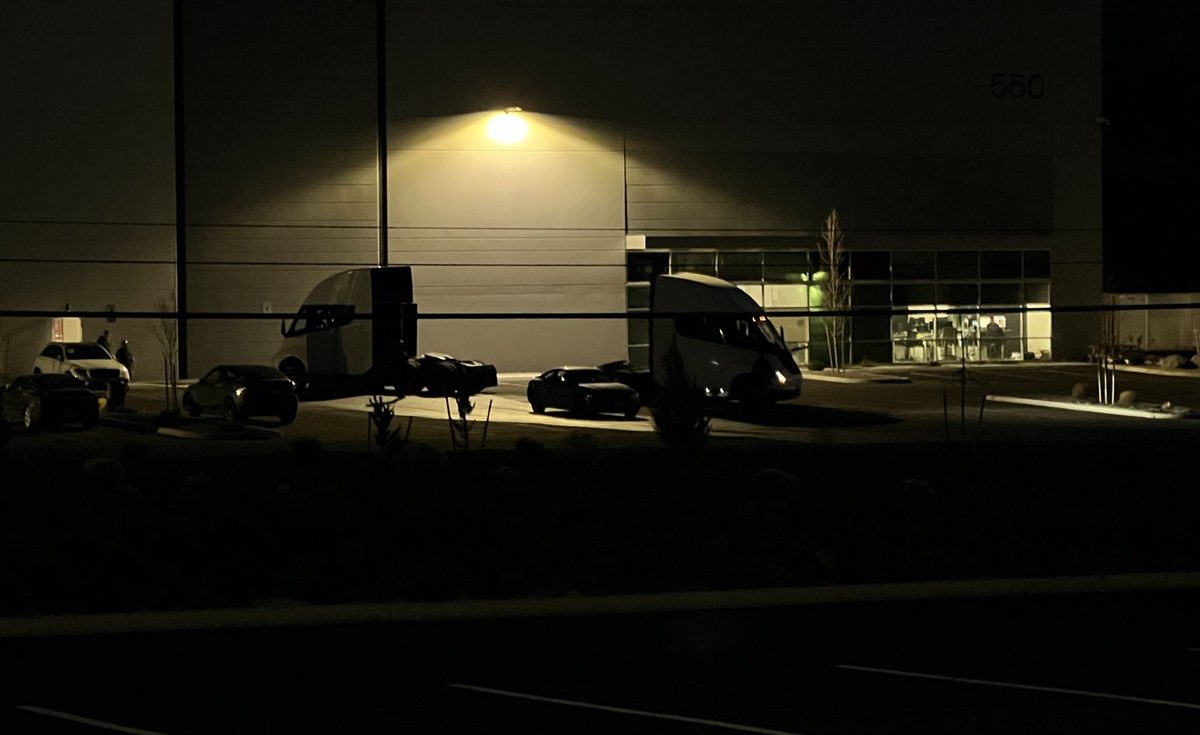 Tesla Semi pair spotted near Giga Nevada, and one is showing off its frunk

It remains to be seen if Tesla was indeed able to deliver a few Tesla Semis to PepsiCo by the end of 2021, but it appears that the EV maker is busy with its all-electric Class 8 truck nonetheless. In a recent sighting, two units of the Tesla Semi were spotted together near Gigafactory Nevada, and one of them even had its frunk opened.

The images were reportedly taken at the Tesla Semi facility near the Giga Nevada complex. The facility, which is not large relative to Tesla’s typical vehicle factory standards, is reportedly capable of building the Class 8 electric truck in limited numbers. Speculations suggest that mass production of the Semi would likely be done in a more robust site such as Gigafactory Texas.

If the pair of Tesla Semis sighted near Giga Nevada were newly-built units, it would suggest that limited production of the all-electric vehicle is finally underway, or at least entering its initial stages. This would be very encouraging for Tesla supporters, seeing as the Semi has already been delayed several times. The vehicle, after all, was initially unveiled in late 2017 with an estimated 2019 delivery date, but customer deliveries have been perennially pushed back since.

While the Semi is now several years late, Tesla has been pretty open about why the vehicle has been pushed back. Tesla noted last year that battery cell constraints are largely responsible for the Semi’s delays. Together with the ongoing supply chain challenges, the limited supply of batteries meant that Tesla had to prioritize its mass-market electric cars like the Model 3 and Model Y instead of projects like the Semi, which require several vehicles’ worth of batteries per unit.

This did not mean that Tesla’s Semi development was stagnant last year, however. On the contrary, 2021 proved very eventful for the Semi program. Early in the year, redesigned prototypes of the Class 8 all-electric long-hauler were spotted in several locations across the United States. Tesla also built what appeared to be the Semi’s first Megachargers in the Gigafactory Nevada complex. Reports emerged suggesting Megachargers for the Semi were being installed for clients such as PepsiCo as well.

With Tesla seemingly poised to start Model Y production in Giga Texas, and with the 4680 battery cell ramp seemingly hitting its momentum, 2022 might be a year of more milestones for the Semi. Granted, the vehicle’s mass production may indeed happen in 2023, but it would not be surprising if more and more units of the all-electric Class 8 truck end up being spotted on public roads this year.

Tesla Semi pair spotted near Giga Nevada, and one is showing off its frunk