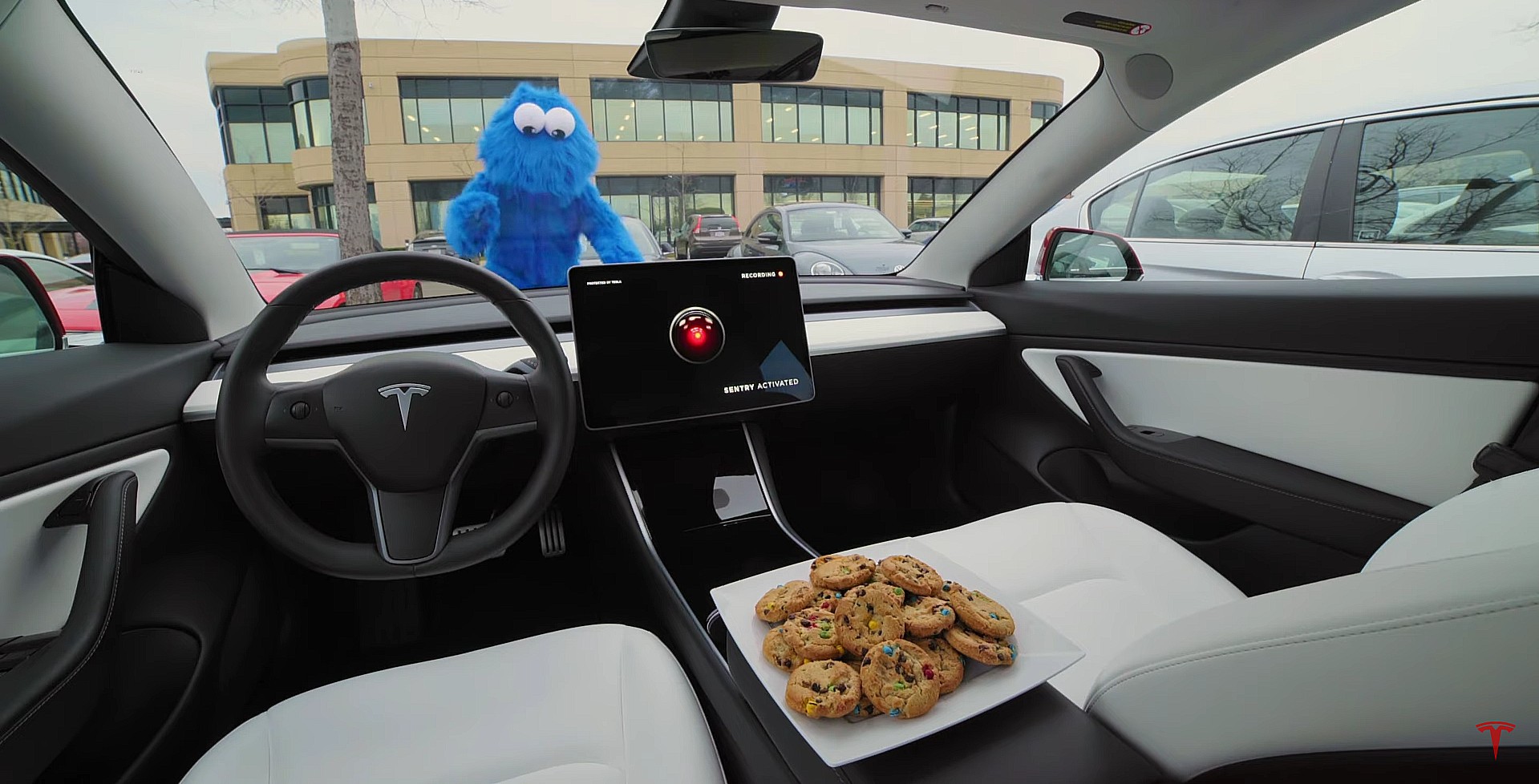 The capabilities of Tesla’s Sentry Mode were recently demonstrated in what could very well be the electric car maker’s most hilarious skit to date. As shown in the brief clip, Sentry Mode’s systems engage when a threat is detected, even if the said threat is a world-famous, blue, muppet named Cookie Monster from Sesame Street.

All three states of Sentry Mode seemed to have been demonstrated in Tesla’s Cookie Monster sketch. Even before the beloved blue muppet noticed the enticing batch of cookies conveniently left inside a Tesla Model 3, it was evident that the electric car’s cameras were already recording in its “standby” state.

As soon as Cookie Monster walked up to the vehicle, Sentry Mode immediately entered its “alert” state, and when the muppet started banging on the Model 3’s windshield to get to the cookies inside, the recently-released security system promptly went on full “alarm” mode. Even when Cookie Monster returned to creep up on the side of the Model 3 later on, Sentry Mode immediately went on its “alert” state.

Apart from a first-person view inside the Model 3 as Sentry Mode was activated, Tesla also provided a sample of footage recorded by the vehicle’s forward camera before the blue muppet started his break-in attempt. Tesla shared this footage from the Model 3’s TeslaCam on its official Twitter page.

Sentry Mode features three states — a “standby” state where the vehicle’s external cameras start recording footage while determining if there is a threat nearby, an “alert” phase where the electric cars’ screen displays HAL 9000’s “eye” and a warning message indicating that cameras are recording, and an “alarm” state which involves Tesla’s electric cars engaging their alarm system, playing music at max volume, and generally calling as much attention to themselves as possible.

Despite Sentry Mode’s loud and undoubtedly nerdy anti-theft systems, Tesla is still reminding electric car owners to avoid leaving valuables in their vehicles. Considering the company’s sketch, forget about leaving hamburgers too, just in case McDonald’s Hamburglar is still on the loose. Then again, if Sentry Mode can deter a Cookie Monster, perhaps the system would be just as effective against a kleptomaniac hamburger aficionado.

Lighthearted muppet and mascot humor aside, Tesla’s Sentry Mode is a security feature that was developed as a response to a string of break-ins against the company’s electric cars. Some of these incidents, such as a number of incidents in the San Francisco Bay Area, have rewarded thieves with expensive spoils, including premium gadgets and luxury accessories.

Watch Cookie Monster’s attempt to break into a Model 3 in the video below.