Two Tesla owners and respected members of the electric vehicle community will try to make history and attempt to drive a Model 3 Performance across Canada on a nonstop, coast-to-coast all-electric road trip from British Columbia to Halifax, Nova Scotia.

Ian Pavelko and Trevor Page of Tesla Owners Online Forum will set off on Sunday from Delta, BC and attempt to complete a non-stop 3,600-mile (5,794 km) journey, using Tesla’s newly opened Trans-Canada Supercharger route. The duo looks to increase awareness that electric vehicles are perfect for long distances even in the harsh and unpredictable weather in Canada.

“So many people think that EVs are limited to secondary roles as commuter cars here, and while that may have been true in the early days, the advances of the last few years have changed the segment dramatically. As Tesla owners and fans, as well as advocates for the entire EV movement, we’re excited to make this trip and show people in dramatic fashion how capable these cars and the charging networks that support them really are,” said the Tesla Model 3 drivers in a press release via Tesla Owners Online. 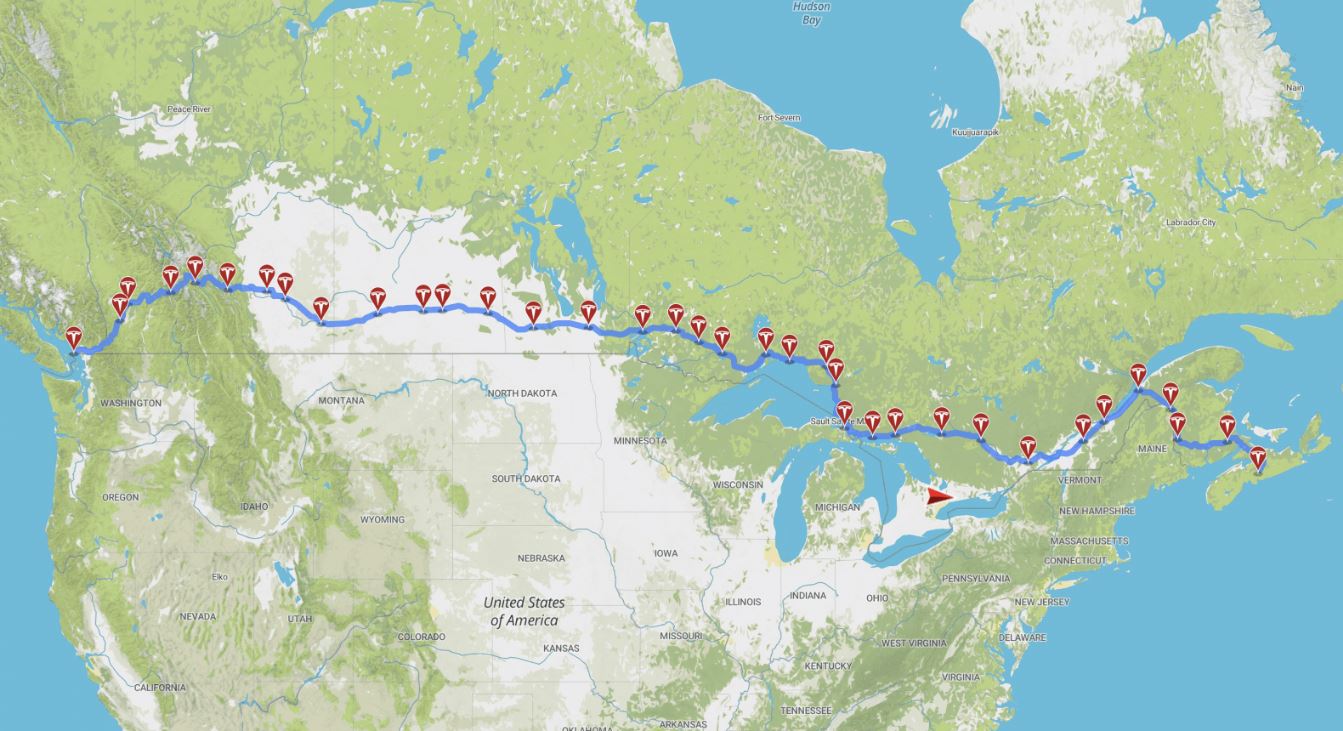 Pavelko and Page will set out to complete the trip along the entire stretch of the Trans-Canada Highway, a federal and provincial transportation artery that traverses the 10 provinces of Canada from the Pacific Ocean side to the Atlantic on the east, in three days. The cross-country electric trip will be helped by Tesla’s Trans-Canada Supercharger route which went online last December. More than 50% of the fast-charging stations along the coast-to-coast route are 250 kW V3 Superchargers that are capable of charge rates of 1,000 miles per hour.

Zero-emission vehicles in Canada are gaining popularity with a 25% year-over-year growth in Q3 of 2019 with roughly 17,000 units sold but consumers still worry that there are not enough public chargers yet. Tesla’s Supercharging network addresses that concern on a global level.

While the upcoming journey is expected to kick off with much fanfare in the Tesla community and across social media, the #FastEVLightningRun drivers are actually not the first ones to attempt the Pacific to Atlantic coast trip. In 2016, couple Silke Sommerfeld and Rolf Oetter drove their Model X from Vancouver to Newfoundland with a solar trailer in tow. In December 2019, Victoria residents and climate advocates Kevin Belanger and Don Goodeve also attempted a cross-country drive in Canada in their Tesla, but did not complete the journey due to poor weather conditions.

Pavelko and Page’s trip is sponsored by Fast EV, a division of Fast Wheels and a company under the umbrella of Fastco Canada. Fast Wheels offers a line of aftermarket alloy wheels that are specifically designed to maintain the efficiency of electric vehicles.