Tesla’s (NASDAQ:TSLA) second-quarter earnings call comes at a pivotal point for the electric car maker. Following a challenging first quarter that saw the company weighed down by lower-than-expected production and delivery figures, Q2 proved to be a comeback for Tesla. Seemingly highlighting CEO Elon Musk’s statement that there is absolutely no demand problem with its electric cars, Tesla set all-time records by producing a total of 87,048 vehicles and delivering around 95,200 in both the United States and the international markets.

Tesla announced a net loss of $408 million for the second quarter, translating to a loss of $2.31 per share. The company also listed $6.3 billion in revenue, which is below Wall Street expectations.

For today’s earnings call, Elon Musk and Tesla’s executives are expected to address questions surrounding the company’s financials and CEO Elon Musk’s goal of returning to profitability in the third and fourth quarter. Updates on the company’s production forecast for 2019 are also expected to be discussed. Other inquiries surrounding upcoming vehicles such as the Tesla Pickup Truck, projects such as Gigafactory 3, and features such as Full Self-Driving will likely be addressed as well.

The following are live updates from Tesla’s Q2 2019 earnings call. Fellow Teslarati reporter Dacia Ferris and I will be updating this article in real-time, so please keep refreshing the page to view the latest updates on this story.

Simon 16:35 PT – And that’s a wrap! Thanks for joining us in today’s earnings call, everyone. Till the next!

Dacia 16:34 PT – “Is there anything silly that we’re doing that we should fix?” Elon asked during his trip to China. He was told that parts made in China were being shipped to New Jersey, then back to China. That’s a silly thing to be stopped, he said.

Dacia 16:33 PT – Parts availability? Moving parts from warehouses and moving them to the service centers addresses the availability issue, Elon says. He compares the stocking to a grocery store keeping Cocoa Puffs on the shelves. Anything used more frequently than every 6 weeks is kept local at the centers.

Dacia 16:31 PT – “I think at the end of the day, regulators will answer to the public,” Elon comments regarding European FSD permissions.

Simon 16:30 PT – RBC Capital Markets asks if Elon Musk expects to offer the full FSD suite in Europe and China, considering regulations? Elon notes that yes, he is expecting a worldwide FSD release. EU will likely be an exception though, as the region’s regulations are quite notable.

Dacia 16:29 PT – Supercharging is incredibly important… You can’t just have like 80% of a journey, you have to have 100%. Driving is freedom to travel, so you have to be able to drive there to have that freedom, Elon remarks as an additional component that’s important for sales.

Simon 16:27 PT – New Street Research asks about Tesla’s initiatives at maintaining an online-only business model. Elon notes that Tesla’s word of mouth is formidable, and that’s really what drives sales. A retail location is like a viral seed in an area, growing organically. They’re not needed, but they’re more like an accelerant, Elon says.

Simon 16:25 PT – Tesla’s story is fundamentally the Model 3 and Model Y. As for the Model S and X, well, Elon jokingly notes that they’re there *partly* to make sure that the lineup spell “S3XY.” That has to be kept.

Simon 16:21 PT – Oppenheimer asks about Gigafactory 3’s battery supplier. Elon notes that while nothing is finalized yet, Tesla does not expect to be cell constrained in Gigafactory 3 for at least a year. Drew adds that Tesla has agreements in place to ensure that the initial Model 3 production run in the Shanghai-based facility will be without complications.

Simon 16:20 PT – Credit Suisse asks about Tesla’s ZEV credits. Is there any quarterly cadence to think about this? Is this going to European automakers? Zach notes that the ZEV Sales credits are a combination of short-term and long-term deals. “We generally try not to run the business based on regulatory credits revenue.” Elon adds that these credits are a relatively small part of Tesla’s revenue.

Dacia 16:16 PT – “Model S and X parts warehousing is taking up space in Fremont, and it’s not needed. Can use space for Model Y needs, Elon comments regarding space constraints at Tesla’s factory. “Just the rate of improvement, which is not slowing down, has been incredible.” The balance of S and X per week is the expected output from Fremont soon, according to Elon. Totaling 10k.

Simon 16:15 PT – JMP Securities asks if there is some potential to reconfigure Fremont’s floor space considering that the Model S and X are single shift. Elon agrees, stating that these spaces that are being freed will be allotted for Model Y production. Fremont’s improvement is radical, to the point where one can get lost in the factory every few months due to the sheer number of changes happening inside.

Dacia 16:14 PT – “From a core financial health standpoint… Tesla’s fiscal discipline is dramatically better than times in the past,” Elon says.

Dacia 16:10 PT – “Elon, do you believe M3 is cannibalizing S and X sales? Why else would demand levels step down?” Elon says they’re not quite sure themselves, some cannibalization possible. There’s also market expectation that there’s a refresh of S, X coming, which he’s emphasized is NOT the case. People don’t realize how much better the S and X are now… We need to address that communications issue, Elon says in reference to lower sales compared to M3.

Dacia 16:08 PT – Demand in Q3 will exceed Q2, Elon says. “I think we’ll see some acceleration of that…I think Q4 will be very strong…Q over Q improvements… Q3 and Q4 next year will be incredible.”

Simon 16:07 PT – Bernstein asks a question is Musk is confident that Q3 deliveries can still improve moving forward. Elon notes that so far, demand in Q3 is exceeding that of Q2. He also noted that Q4 will be “very strong.” “Expect quarter-to-quarter improvements,” Musk said, stating that Q1 2020 will be “tough,” and so will Q2 2020 be, though to a lesser degree. Zach explains that in the auto business, there’s this thing called seasonality.

Dacia 16:06 PT – Any updates on Giga China? Model 3 production? Seen anything RE order flow and demand? Elon says long term demand for M3 in greater China is about 5,000 per week. Globally, perhaps 15,000 Model 3 per week, as per Elon’s personal estimate.

Simon 16:05 PT – Wolfe Research asks about Gigafactory 3’s targets in China. Elon won’t go into details, though he states that he believes the long-term demand for the Model 3 in the greater China region will be around 5,000 a week. When asked if Tesla would source cars to Europe from China, Elon stated that Europe’s vehicles will be coming from Fremont instead, at least until Gigafactory 4 in Europe is online.

Dacia 16:04 PT – Any improvements on Gigafactory capacity? “We have seen improvements…we’re in the high 20s in Gigawatt hours and that’s increasing,” Drew responds.

Dacia 16:03 PT – Customer service as a personal priority – what steps are you taking? Elon cites current real-time service updates and increases in service centers and mobile service. Elon also discusses service visits. “A lot of service visits are just questions about the car,” Elon says. “Our number one question is how to use the Autopilot.” “How do I turn it on?”

Simon 15:58 PT – The question and answer portion begins. Here’s one for the battery and powertrain day. Elon notes that the event will be a comprehensive review of Tesla’s battery tech and manufacturing, including a roadmap for a terawatt-hour per year rate.

Simon 15:51 PT – Elon notes that CTO JB Straubel will be transitioning to an advisory role in the company. JB explains that he is not disappearing out of lack of confidence in the company. He has total confidence in Drew Baglino, who will be taking his place as Tesla’s CTO. JB notes that he is excited to keep working on the company’s new technologies, though Elon sounds notably emotional while reminiscing the CTO’s time with Tesla. They go way back, after all.

Simon 15:50 PT – Zach addresses the elephant in the room. It is easy to forget that Tesla is playing a long-term game, he says. The Model 3 was a bet, and it’s starting to pay off. Gigafactory 3 is about to be complete. Gigafactory 4 in Europe is underway. Model Y is coming for the automotive market’s most lucrative segment. Indeed, it’s a long-term play.

Simon 15:43 PT – Tesla is now at a point where it is close to self-funding, says Elon Musk. He also noted that Tesla could break-even this quarter and be back to profitability in the following quarter.

Simon 15:40 PT – Elon discusses the Model S’ Ultimate Car of the Year award from MotorTrend and Model 3’s stellar safety ratings. Musk appears to be reading from a pre-prepared script at this point, though he did state that the Model Y ramp will be far easier than that of the Model 3. He’s also taking some time explaining how pertinent Tesla’s growth is.

Dacia 15:37 PT – Elon’s remarks may be scripted, but the facts are still awesome. Tesla has a lot to look forward to despite some losses this quarter.

Simon 15:35 PT – Elon starts off by saying how proud he is of Tesla’s team, particularly in light of the Tesla team’s growth and accomplishments in the second quarter. Delivering 95,200 vehicles in three months is no joke, after all. “Achieving a record number of deliveries is a milestone. This was achieved thanks to the tremendous work by the Tesla team,” he said.

Simon 15:33 PT – Ooh, look what we have here. The earnings call is starting on time. Martin Viecha takes the floor. Elon, JB and Zach are in attendance.

Simon 15:25 PT –  Last five minutes before the earnings call begins. We’re about to find out if the event will begin on time or not.

Simon 15:20 PT – Something that’s particularly interesting in Tesla’s Q2 Update Letter also lies in a section for Model Y production. Finally, after all the way, Tesla has confirmed where the all-electric SUV will be made. Just as expected, the Model 3’s SUV sibling will be manufactured in the Fremont factory.

Simon 15:15 PT – I get it. Tesla’s Q2 loss is a bit disheartening since the company did reach record deliveries in the second quarter. I guess I was hoping for Tesla to show a small profit somehow. Then again, Elon did say that Q2 will likely end at a loss. So I shouldn’t really get that surprised.

Simon 15:10 PT – The Q2 Update Letter mentioned a number of gems, I must say. For one, Tesla has $5 billion in cash, the largest it’s been in the company’s history. Higher-margin Model 3s continue to sell well, and this absolute unit of a factory in China is progressing at a stupidly fast pace. Everyone knows Gigafactory 3 will be built fast. But not this fast. This. Is. Insane. 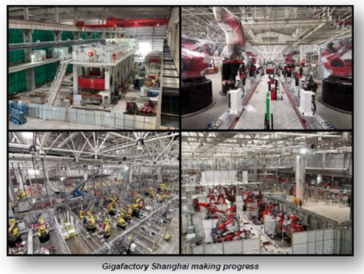 The Tesla Gigafactory 3 site as of July 2019. (Credit: Jason Yang/YouTube)

Simon 15:05 PT – So here we are again at another Tesla earnings call. The call should start in around 30 minutes not accounting for Elon Time. TSLA stock is currently being battered in after-hours trading due to the electric car maker falling short of Wall Street’s estimates. With record numbers in Q2 though, Tesla shares are likely not done being volatile today.