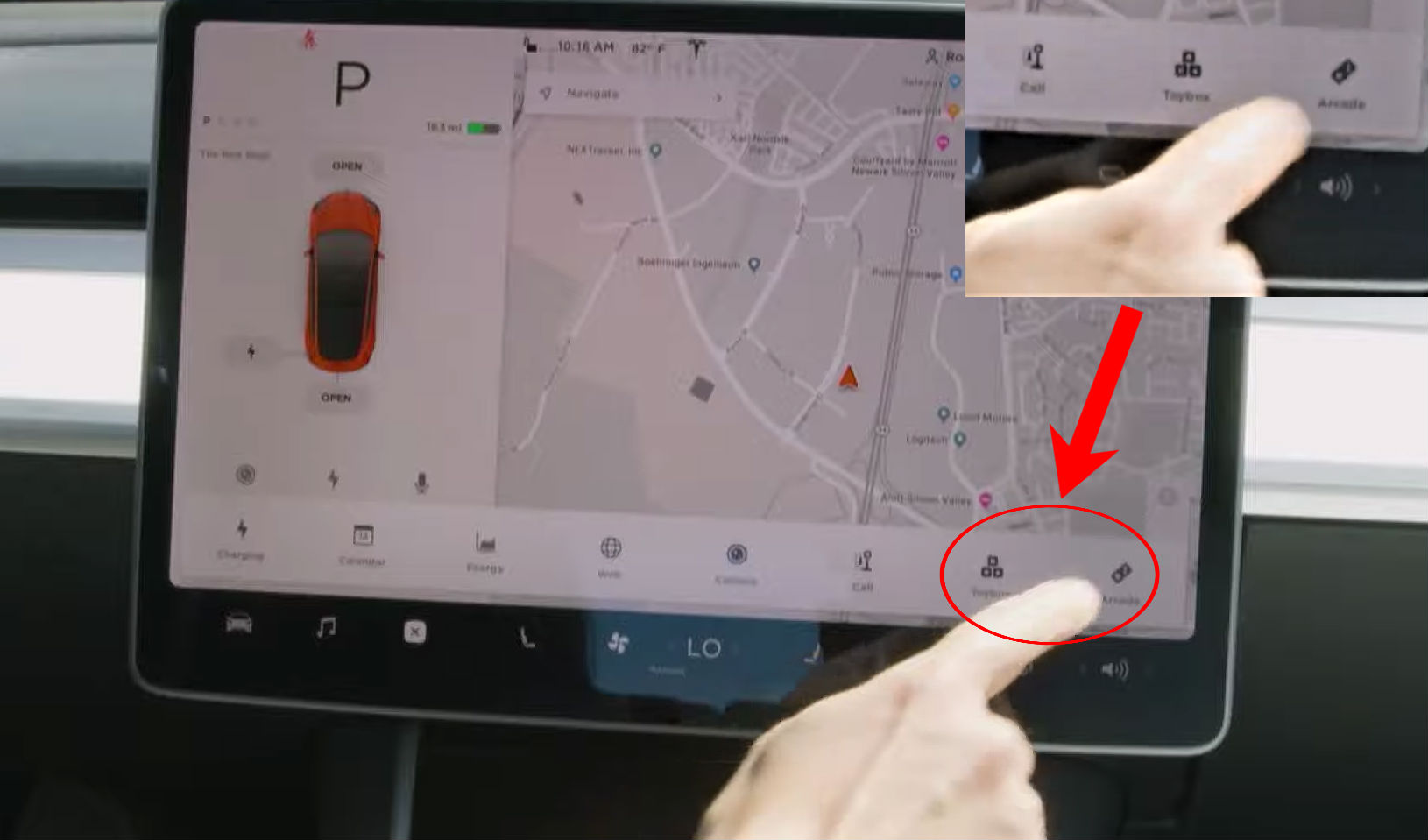 Elon Musk’s recent appearance at E3 Coliseum 2019 was rife with insights about Tesla’s current and future projects, particularly in the gaming capabilities of the company’s electric cars. Musk even shared a video of a Model 3 running Tesla’s new racing game, Beach Buggy Racing 2: Tesla Edition. Interestingly, the Model 3 in the teaser featured a new UI; one that included two new dedicated buttons on its app launcher.

The two new icons on the Model 3’s app launcher only appeared very briefly onscreen, but they were enough to stoke the interest of the Tesla community. One enthusiast, u/Wugz from the r/TeslaMotors subreddit, opted to enhance a frame of the preview. The sharpened images of the two icons were not fully clear, but they do seem to be labeled as “Toybox” and “Arcade.”

“Arcade” seems to be a straight reference to the games that will be rolled out for Tesla’s electric cars, especially since the vehicle’s user accessed the new racing title through the on-screen button in the demonstration. What was more interesting was “Toybox,” which has not been mentioned by Musk or Tesla in the past.

There are several possible features that could be accessed through the Tesla UI’s “Toybox” button. Perhaps it will be a button that allows users to access their vehicles’ Easter Eggs? Tesla has been introducing a number of Easter Eggs for its cars over the years, from the classic Sketchpad to the more recent “Emissions Testing Mode” a.k.a. Fart Mode, or as Musk would like to describe it, his “finest work” to date. Thus, it would make sense for the company to arrange all these features under a single, easy-to-access menu.

The addition of dedicated buttons for “Toybox” and “Arcade” represents Tesla’s ongoing improvements to its vehicles’ software, not only on the safety aspect of the electric cars but also on the more fun parts of the ownership experience. As the company’s fleet of vehicles grows, Tesla could even look into launching an app store for its electric cars. This was something mentioned by Musk during an appearance at Tesla owner-enthusiast Ryan McCaffrey’s Ride the Lightning podcast.

“In order for it to be worthwhile for somebody to write an app, there has to be enough of an install base to warrant the effort. Even if you are going to port something, it’s still got to be worth the effort. As our number of vehicles grows, it starts to potentially make more sense to develop games and other applications for Tesla. We just need a lot of cars,” Musk said.

With the continued international ramp of the Model 3 and the eventual arrival of the Model Y and Tesla Pickup Truck, Musk’s statements could ring true in the very near future.