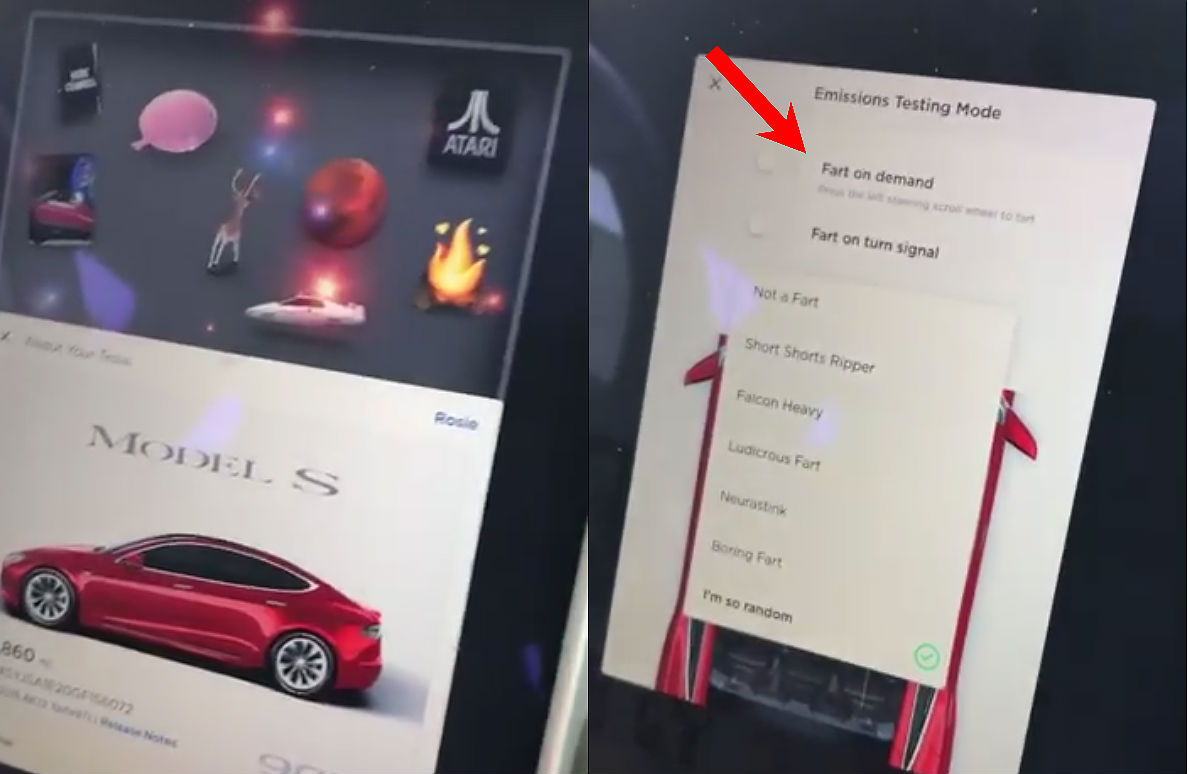 Elon Musk has been pretty open about the idea that Tesla’s electric cars are some of the most fun things that anybody can buy. He mentioned it during his appearance at the Joe Rogan Experience podcast, and he expressed the idea again late last month. During a Twitter session then, Musk stated that some fun, new Easter Eggs are coming to Tesla’s electric cars, including some “Toilet Humor,” “Romance Mode,” and some new games.

With Tesla’s firmware update 2018.48.12.3a4e97c, Elon Musk made good on his promise. Well, at least the first two in his late November announcement. As Tesla owners who received the recent firmware update have found out, their electric cars now have the capability to pass gas and invoke some romantic vibes. Judging by reactions on social media, kids and kids at heart seem to find Musk’s “Toilet Humor” Easter Egg really funny. As for “Romance Mode,” well, let’s just say that Tesla appears to know a thing or two about setting the right atmosphere.

As revealed by a clip shared by Model S owner John McAfee (uploaded in the private Tesla Model S Owner’s Club Facebook Group), the “Toilet Humor” Easter Egg that Elon Musk teased came in the form of fart noises. The feature itself could be activated by tapping on the whoopee cushion icon on Tesla’s Easter Egg Menu. Upon opening the app (dubbed as “Emissions Testing Mode,” perhaps as a lighthearted jab at competitors like Volkswagen?), Tesla owners can select between “Fart on Demand” and “Fart on Turn Signal.”

In the spirit of fun and good-natured toilet humor, Tesla allows drivers to select which type of fart could be activated on the vehicle. Among the choices are the “Not a Fart,” a reference to Musk’s Not-a-Flamethrower, the “Short Shorts Ripper,” an evident gesture to TSLA short-sellers who consistently attempt to discredit the company, the “Falcon Heavy,” a nod to SpaceX’s largest operational rocket to date, the “Ludicrous Fart,” a reference to the Model S P100D and Model X P100D’s Ludicrous Mode, the “Boring Fart,” a direct nod to The Boring Company, and “I’m so random,” which likely involves a randomized activation of the vehicle’s different fart sounds.

Apart from Elon Musk’s promised “Toilet Humor,” Tesla is also rolling out a “Romance Mode” Easter Egg with its most recent firmware update. The feature could be activated by tapping the fire icon in the vehicles’ Easter Egg menu.

Once enabled, Romance Mode transforms the entire center display of a vehicle into a fireplace, complete with the sounds of a crackling fire. In a follow-up post, John McAfee noted that the Easter Egg also blasts heat from the front vents, while playing some romantic music (the Model S owner noted that his car played Marvin Gaye’s Sexual Healing when he activated Romance Mode).

Elon Musk might be dead serious about Tesla’s mission of accelerating the world’s transition to sustainable energy, but he is never one to skip out on some good-natured fun. Besides their industry-leading safety and insane performance capabilities, Tesla’s vehicles are known to feature numerous fun references to pop culture. Among these include Mad Max Mode for Navigate on Autopilot, and a volume setting that goes all the way up to 11, just like an amplifier featured in This is Spinal Tap.

Musk’s other companies feature the same fun tendencies. The Boring Company, for one, is currently building an actual tower made of bricks for the unveiling party of its Hawthorne test tunnel. In true Elon Musk fashion, the tower is a direct nod to Monty Python and the Holy Grail, one of the most iconic comedy films ever made.