After a seemingly long hiatus in Tesla-time that amounts to roughly six weeks of Tesla Referral Program inactivity, anxious referral program leaders received notification of a new secret ‘Level 2’ prize – the chance to drive an electric tunnel boring machine with The Boring Company.

Our friends at Like Tesla who gave the world a first look at an opportunity to win a next generation Tesla Roadster, sent us new screenshots showing the next level of referral program exclusivity.

“You’ve unlocked the second secret level. Share your referral code to give 5 more of your friends free unlimited Supercharging and $1,000 off a new Model S or Model X.” reads a notification from Tesla. The ability to ‘gift’ 5 Model S or Model X buyers with free unlimited Supercharging and a chance to attend Tesla’s upcoming Tesla Semi unveiling event was introduced in Tesla’s ninth referral program. 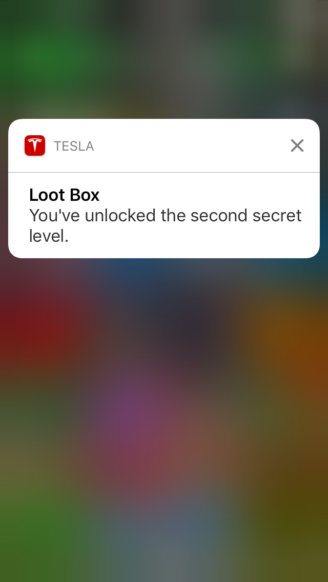 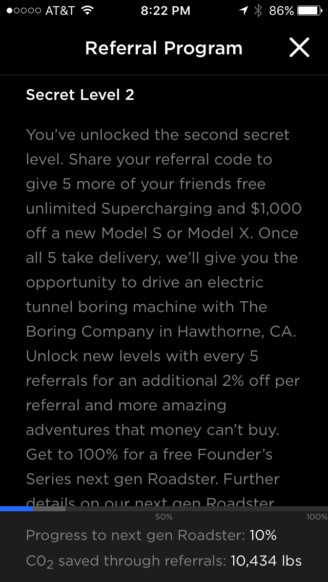 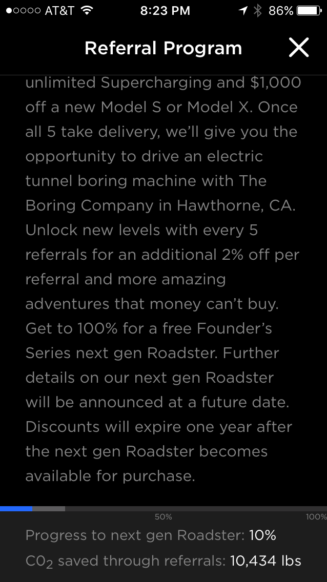 In addition to opening up the ability to gift 5 more friends free use of Tesla’s global Supercharger network, the company revealed a new incentive for top referrers.

“Once all 5 take delivery, we’ll give you the opportunity to drive an electric tunnel boring machine with The Boring Company in Hawthorne, CA.

This one-of-a-kind prize further validates the melding of Elon Musk companies, tying Tesla with his tunnel-digging startup – The Boring Company. There’s no indication on whether the referral program winner will have the opportunity to ride in the proposed 2-mile R&D tunnel beneath SpaceX, but having the chance to operate Musk’s snail-beating digger seems like it would be … boring. The notification from Tesla also read, “Unlock new levels with every 5 referrals for an additional 2% off per referral and more amazing adventures that money can’t buy.”

One might recall that Tesla’s Director of Growth Programs Praveen Arichandran revealed at the Model 3 Delivery Event, largely attended by employees and top referrers including YouTubers, said the company would be opening up amazing adventures aimed at bringing Tesla owners together.  “Over the coming year, you’re going to get to spend some serious time together.”

As we wait for the next “Secret Level 3”, we can’t help but wonder what the future holds in the world of “amazing adventures” with Tesla. Care to guess?

Leave us your thoughts in the comments below. And a big thanks to Like Tesla for sharing with us this first look. Please consider using their referral code, especially if you’re a fan/friend and want to see what’s in the next secret level.