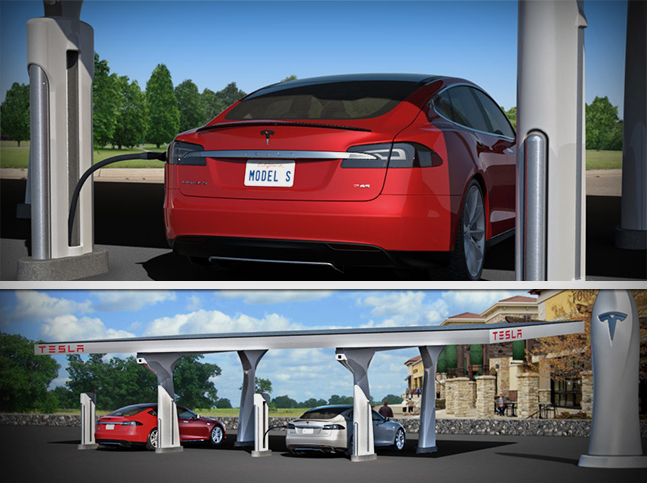 In a very bold move, Musk is considering opening the company’s intellectual property (IP) for its Superchargers inviting the competition in, breaking away from outmoded fights.

Just when you think you had Tesla figured out, Elon Musk, Tesla Motors’ CEO, throws in another bit to the overall electric vehicle (EV) picture, once again, changes the background.

The one thing almost all companies have in common is secrecy. Carmakers are no different and jealously keep trade secrets. What makes Tesla Motors unique and part of its success, is its engineering, which is off limit to GM, Ford and the rest. Companies edge out their products and services by keeping their know-how in-house in order to dominate a market, or a part of it. Even if some things are off limits, all carmakers pull apart others’ cars to see how they were engineered. If this was an effective strategy until now, it has its limits. Pushed to the maximum, it strangles markets and consumers are left to pay the price. There is less choice and innovations. Eventually, someone has to break the trends and breath new life. Is this what Tesla is trying to do? Not so fast.

Supercharge me and everyone else

Elon Musk says someone has to take the first step and Tesla Motors is the company to show the way forward. We couldn’t agree more. We’re tired of living in the stone age, we want a modern world that holds up to its promise and potential.

A company opening up the IP of its Supercharger network to create a “standard technical specification that other electric car makers can adopt,” as Engadget puts it, is a bold move forward.

But is it naïve, or simply a brilliant move forward when the competition is locked in a futile fight? The question is, who stands to gain the most from such a move. Tesla is willing give away some of its IP in order for other makers to charge at its Superchargers. It also hopes to by-pass the CHAdeMO and SAE fight, as well as the upcoming Chinese charging network with its own protocol. Tesla might charge a modest fee return, but that is nothing for such a juggernaut. Musk sees, as most of us do, that the automobile industry is in disarray and still grapples over how to create a thriving business model with electric vehicles (EV). If the industry, used to making internal combustion engines (ICE), it doesn’t know what to do with an electric motor and batteries, even less with a charging network. Luckily, Tesla took a lead early there.

So far Nissan is one of the only carmaker to grow the network with CHAdeMO chargers at its dealerships. Then, there is the SAE Combo standard trying to muscle its way in, fighting against CHAdeMO. The absurd fight ended last year with a standstill, forcing once again consumers to choose one or the other, losing in the short run. So what can Tesla Motors do with its own Supercharger system watching another Chinese charger standard take advantage of the confusion? Open its doors and leapfrog the infighting competitors. It works to everyone’s advantage and the company comes out on top. Simple, brilliant, and so Tesla.

Standards come in two ways, officially, or de facto. For those of you seasoned enough to remember, we once had a choice between a good quality Betamax, and a rather inferior VHS system. VHS became a de facto standard after a deep pocket campaigns turned a generation on to it. The same almost happened to DVD recording, and there are plenty of other examples still. Tesla opening its IP doors to the competition is a bold move above the fray, and one we can be happy about since it will benefit the entire EV community. Hopefully, it will also stop this infighting caveman mentality companies have, pushing their visions on consumers. When you get down to it, what’s important is to have a nationwide charging network that works for as many cars as possible, regardless of makers, backers or other financial interests. Tesla does it again.