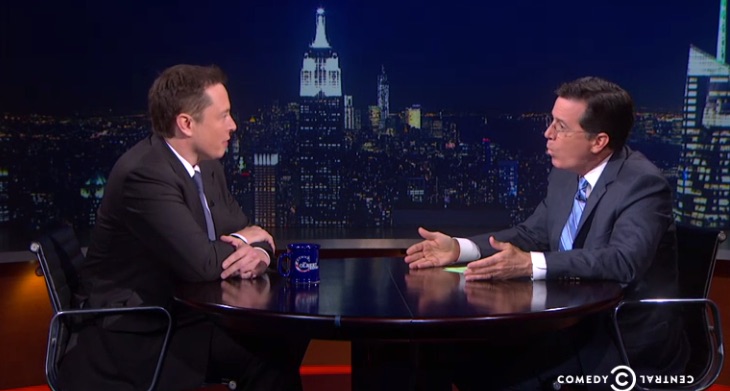 Elon Musk will be the guest of Stephen Colbert on September 9, the second night of the new Late Show. Travis Kalanik of Uber will be on the following night. Stephen Colbert will kick off his career as host of the ‘Late Show’ on September 8 with first guests George Clooney and Republican White House hopeful Jeb Bush. But things will heat up on the show’s second night, when SpaceX and Tesla CEO Elon Musk will take stage with Colbert.

Some Tesla fans across reddit commented that it would be epic if Elon made his entrance driving a brand new Model X. That would certainly help the stock price recover from the drubbing it took in the past couple of weeks. Another comment archly suggested that if Musk is scheduled for September 9, his appearance might not actually take place until December or even early January of next year.

In happier news, Stephen Colbert has announced his first week’s worth of guests on The Late Show. pic.twitter.com/2UzsXqz5bg