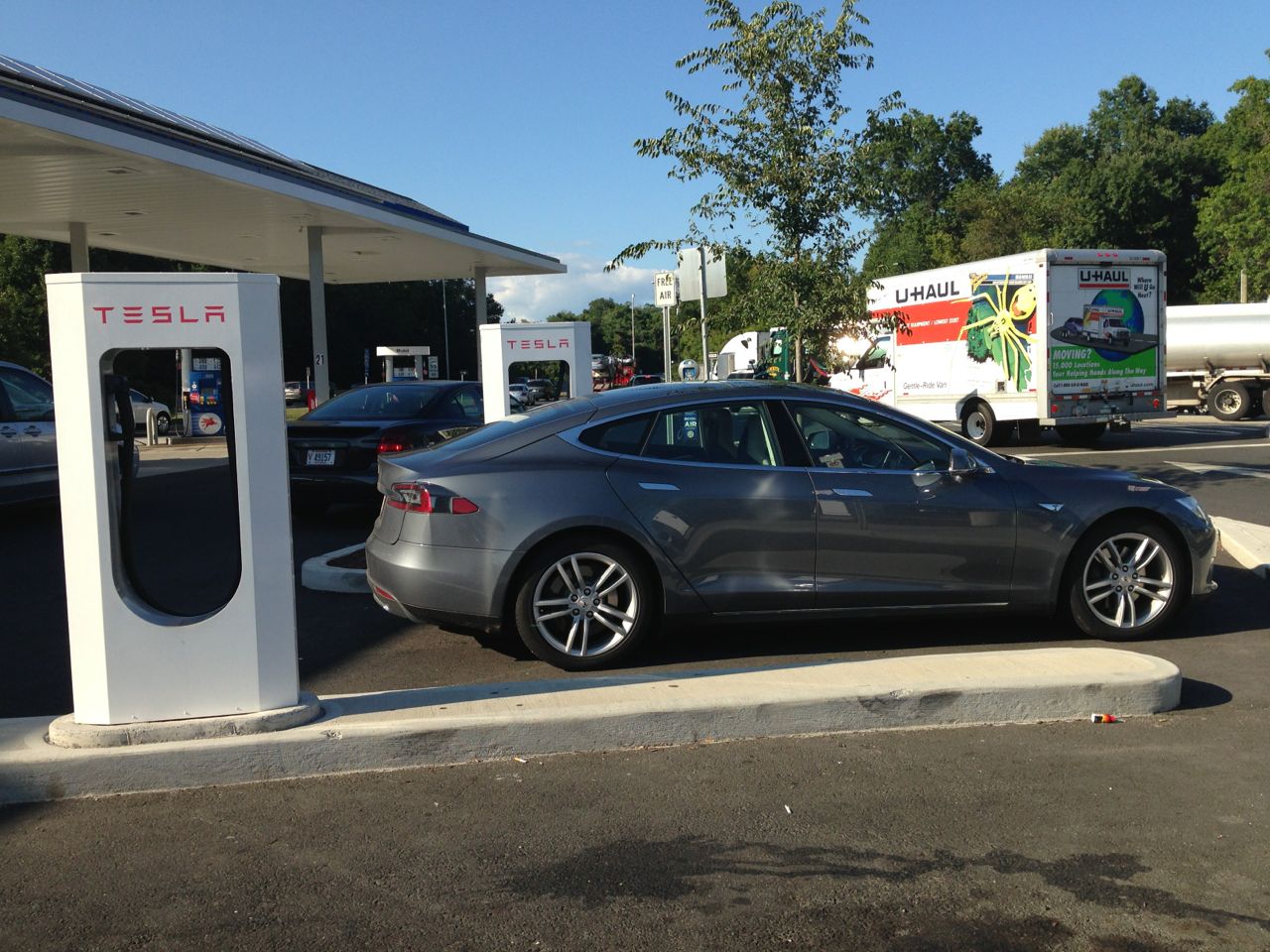 Having followed my planning guide for taking a Tesla road trip, I’m happy to report that we made it to our destination and back, but not without a few lessons to be learned. In planning my first Tesla road trip I calculated the distance from my home to the first Supercharger and then to my destination. What I neglected to think about was that I also needed to go to work that day. Thats an 80 mile round trip that I had to add into my calculations. While I had a good safety buffer built into my plan, I didn’t have enough for an extra 80 miles. So I came up with three options:

I went with option #3 and used the free HPWC at the local Tesla Store at the Natick, MA mall. I plugged in after lunch and range charged to the full 265 rated mile limit. It took me just under 2 hours to charge from 185 rated miles to 265 rated miles using the HPWC but other than the walk to/from the mall it didn’t disrupt any of my plans.

LESSON #1: Factor in any miles that will be driven prior to the Tesla road trip itself.

Supercharging along the way On this Tesla road trip, Supercharging was required. I needed the range and it had to work. We arrived at the Darien, CT Tesla Supercharger with 66 rated miles remaining after driving 188 miles from MA. Of the six available spots, only one was occupied by an ICE car with a driver sitting in it. The Supercharger bays were all premium parking spaces right in front of the rest center, and we can see how this could be easily taken advantage of by non-Tesla vehicles.

We backed in, plugged in and began our charge. I was accustomed to always charging to 90%, since my daily commute often required it, so instinctually I charged up to the same level later to realize that the painful waiting time could have been avoided.

It took us 49 minutes to charge from 66 rated miles (25% charge) to 238 rated miles (90% charge). I only needed 102 rated miles to get to my destination plus a safety margin. We all felt the pain of this wait which was compounded by the fact that it was very late in the evening and we had just drove through pouring rain in crazy east coast traffic. This rest area was nice but it only had junk food options and a coffee shop – nothing for a real sit down dinner.

LESSON #2: Charging more than you need is a waste of time, especially if there’s no intention to eat or rest while you wait.

After the charge stop, we headed on to our destination in NJ. There was a major accident on one of our highways forcing us to take a 12 mile detour. Thank goodness for the extra range. I knew destination charging was going to be a challenge especially since patience was wearing thin for all passengers due to the slow and tiring drive in the pouring rain. Plus, I was in no mood to hunt for a wall outlet in the dark so I waited until the next day. But that also meant I would lose 12 precious hours of destination charging.

A careful inspection of the property the next day revealed a dirty NEMA 10-30 dryer connection that I couldn’t use. I ended up plugging into a standard 110V US outlet (NEMA 5-15) that would give me a dismal charge rate of 4 miles/hour. It turned out to be a delicate balance between when I should be plugged in (as much as possible) and when to drive out to sightsee.

LESSON #3: Know, in advance, the exact location and plug type for your destination charge and plug-in as soon as you arrive.

We ended up using a mini-van for our day excursions because of range concerns as well as questionable parking at the local county fair. The Model S stayed plugged into the wall out the entire day and added roughly 100 miles of range.

Supercharging on the way home

Supercharging on the way back was much less painful because I had learned to charge up to the amount I needed (plus a 25% safety margin) to save time. We arrived at the Darien, CT northbound Supercharger with 72 rated miles remaining and charged up to 202 rated miles in a painless 30 minutes. We shaved 40% off the charge time from the last time we were there which made it feel remarkably faster and more bearable. One of the Supercharger stall was ICE’d (parked by non-Tesla vehicles that can not utilize a Supercharger) with nobody in the car while two other stalls had cones in cones in front of it. It turns out that the cones were there to discourage ICE’ing.

LESSON #4: Don’t assume a Supercharger is out of commission if there’s a cone in front of it.

After charging up to 202 rated miles, we had enough to get home. It was going to be dinner time soon so we decided to grab a quick meal at Panera at the East Greenwich, RI Supercharger. If we were going to stop and eat at a Panera, why not charge while we waited? While Tesla advertises 170 miles of rated range added in as little as 30 minutes, this rate of charge only takes place within the “sweet spot”. The analogy that comes to mind is – imagine filing a bucket of water with a fire hose. You’ll fill it quickly while the bucket is near empty but as you approach 80%+ of fullness, you’ll need to dial down the flow in order to not spill the amount you’ve already put into the bucket. The same goes for filling up the Tesla battery.

LESSON #5: Keeping your battery within the sweet spot will yield the fastest Supercharging experience.

Thanks to this extra Supercharger pit stop we arrived home with 165 miles of rated range left, plenty for the next day’s commute.

We drove 687 miles on our first Tesla road trip and were able to take away several great lessons to be learned. We only saw two other Teslas – one P85 at an ice cream store in NJ and another S85 at the East Greenwich Supercharger – during our journey across five states.

We experienced ICE’ing of Supercharger stalls at every Supercharger station we visited, presumably because there still aren’t that many Teslas out in the North East relative to the West coast, but also because they’re positioned in prime parking locations. I’d gladly park my car at the back of the lot and walk further if I could encounter less ICE’ing.