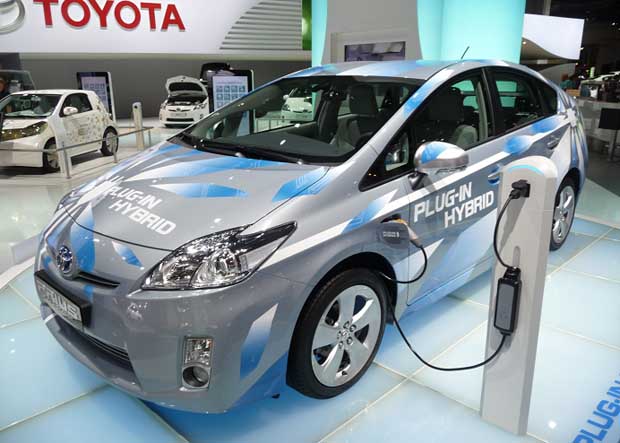 Toyota now understands how important all-electric vehicles are to the future of their company… so important, in fact, that they’ve designated the company’s president to lead the charge, along with two executive vice presidents and the chief engineer of its Prius team.

Toyota Motor Corporation has announced that President Akio Toyoda will join Mitsuhisa Kato, Shigeki Terashi, and Koji Toyoshima, respectively, to lead the EV strategy unit in a new commitment to its electric car division. Representatives from group suppliers Denso Corp., Aisin Seiki Co. and Toyota Industries Corp. will offer guidance and support. The move comes after Toyota’s entrenched mission to foreground hydrogen fuel cell vehicles alongside hybrids, a lead which the rest of the automotive industry has failed to follow.

President Akio Toyoda, grandson of the company’s founder Kiichiro Toyoda, has been leading the automaker since 2009. “By putting the president and vice presidents in charge of the department, we plan to speed up development of electric cars,” said Toyota spokeswoman Kayo Doi. “The president will directly oversee the department’s operations to enable decisions to be made quickly and nimbly.”

Toyota’s decision is a response to regulatory moves, especially in China and Europe, that favor battery-electric cars as part of alternative energy strategies. Led by Tesla Motors, Toyota’s competitors have been heavily promoting their viable zero-emission vehicles. Volkswagen, Nissan, Daimler, and BMW have all been in the electric car news lately, especially in discussions about the pro’s and con’s of collaborative lithium-ion battery production.

Until recently, Toyota has hesitated at the idea of battery electric vehicles. A deal gone bad to jointly build the RAV4 Electric with Tesla in 2014 left residual tensions led to a supposed competition between the Toyota fuel cell car and the Tesla Model S. Toyota didn’t fare very well, and, since then, Toyota has touted its new Prius Prime plug-in hybrid.

Nikkei reported earlier this month of Toyota’s plans to “bolster development of batteries” through the company’s battery material research department, as well its intention to acquire batteries from outside sources in order to keep costs of its future EVs competitive. This shows the incremental shift in Toyota’s perspective about all-electric vehicles, which was based on previous Toyota strong beliefs that EVs would never become mainstream due to the high cost of batteries and limited driving range.

Earlier this month, Toyota said it will develop cars with up to 15 percent greater range and battery life in the next few years. But can it catch up with the Tesla, which is now considered the ultimate connected car?