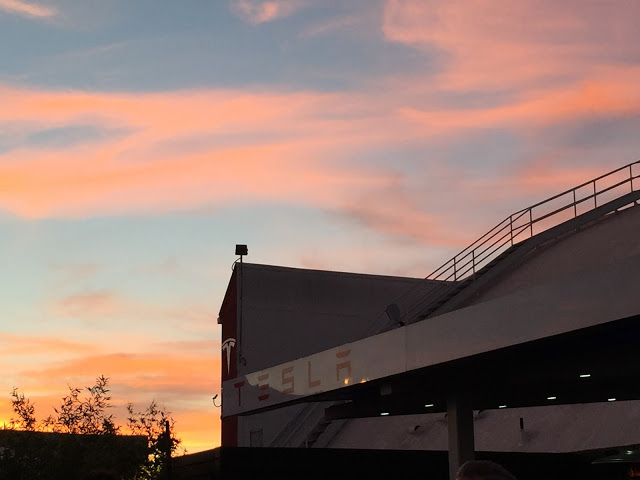 It looks like the issues of the Customer Non-disclosure agreement revised at NHTSA request and the suspension / ball joint fiasco (whether true or fabricated)  have canceled all the good will that resulted from Ron Baron’s disclosure of his $300 million investment.

$TSLA stock is now officially in “bearish” territory, with 5 consecutive Heikin Ashi red (negative) bars, the MACD gone negative, the MACD averages crossed the the bears, and finally the stock has dropped below the 200-day moving average. Which means I won’t touch TSLA stock for a while. What is sad is that all of this could have been avoided by Tesla footing a $3,000 out-of-warranty bill.

The problem started way back on April 28 when Mr. Cordaro reported his issue with the suspension and ball joints on Tesla Motors Club Forum. Mr. Cordaro and Tesla service representatives went back and forth for over a month haggling over whether this was normal wear and tear or not. All of this went on in a public forum, where several Tesla “haters”, very well known to Tesla, fueled the negativity with many postings, mostly unsubstantiated, complaining about all kinds of Tesla issues. These are posters that have been banned by the forum several times, but continue to come back with different handle names (Lucille and Loosewheel in this instance), to continue their Tesla bashing.

The whole thing could have just died there, had Tesla just taken care of the customer, and killed the story by doing what it has done many times before: just fix the issue no matter if the problem was the customer’s or Tesla’s. Instead Tesla offered to cover only part of the work, about half of the $3,000 to fix the issue.

The whole thing spiraled totally out of control when Mr. Cordaro revealed that he was required to sign a non-disclosure, posted the non-disclosure text online, and filed a formal complaint with the NHSTA. At this point a well known blogger from Daily Kansan joined in with a blog that was picked up as “news” by everyone, from Bloomberg to the Wall Street Journal.

Tesla work at damage control did not work, as a very lengthly post to respond to the allegations actually brought up to the surface possible issues with the non-disclosure, which had been known to Tesla for months and that eventually resulted in a revised non-disclosure.

Each new revelation pounded the stock and now investors are left with a $2.6 billion loss in value in $TSLA stock, with the stock dropping $20 in the last 5 trading sessions.

I hope that this will be a learning experience for the PR management at Tesla.