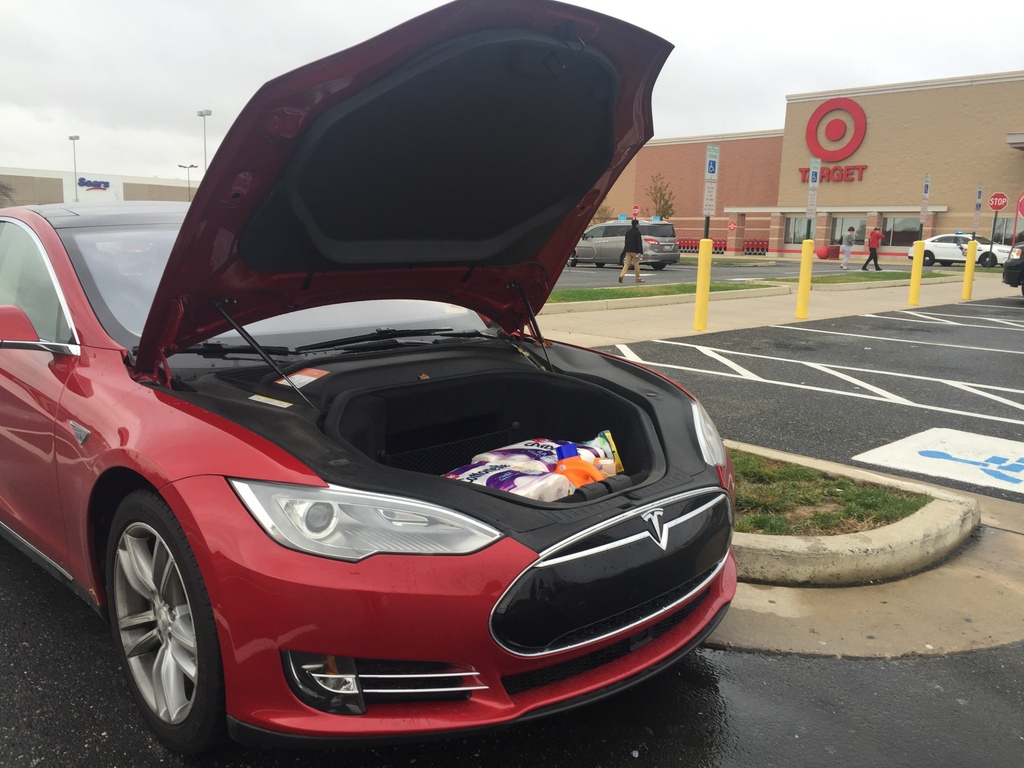 Only a Tesla can inspire me to get to the gym and voluntarily go buy the extra soft toilet paper my husband is fond of (and nearly out of) at 7:00am. How perfect this car is for running errands, and providing a little humor, can not be understated. Last week, I had the day off for Veteran’s Day. My husband did not, but doesn’t leave for work until 8:45am. That being said, I flew out the door early knowing I could take the Tesla if I made it quick.

Per usual, I scouted out a good parking spot in the shopping center. Good in Tesla terms means far enough away from the door to minimize the chance of someone parking beside you, and on an end of some sort so you can favor that side and leave more space opposite in case someone does take up residence in the next space. Also per usual, I backed in. Look, it’s the same as the driveway at home. Driving backwards means reduced visibility, even with the best backup camera. Why everyone doesn’t automatically back into every parking spot so that they have full visibility when leaving is beyond me. Think about it. It’s also why using the frunk rather than the traditional trunk in the rear is great! I was able to cruise right up with my cart, load things in, and not worry about having to maneuver my cart to the rear of the car and squeeze in between the car behind me. If you happened to miss where I’m shopping, here’s a hint: buying two of said toilet paper packs resulted in a $5 gift card. As did buying two bottles of laundry detergent. And my multi-coat red paint is the perfect match for the store’s logo. Here’s proof: When I came out of the store, I tossed my purchases right in the front trunk that we owners so cleverly dub the “frunk.” It’s carpeted and clean and the perfect size for these kind of purchases. Even without bags. (Disclaimer: Owning a Tesla elevates your consciousness about environmental impacts. And cashiers will look at you like you have two heads when you say “I don’t need any bags.”)

Everything fit wonderfully and I had just taken the above photo when something hilarious happened right on cue. A kind gentleman parked several parking spots away and looked over at me. Two women behind him were looking as well. “Are you okay?” he yelled over to me. I yelled back, “I’m just loading in my purchases.”

A short conversation ensued about how it’s an electric car and thus has no engine. The women walked off but he had come closer to get a better look. He explained to me that he assumed something was wrong because I was in the parking lot alone with my hood up. Chivalry isn’t dead folks. I only wish I had the foresight to snap the man’s picture. I thanked him for his concern and we parted ways.

Having a frunk is useful in many ways. On one vacation, we decided to buy a new pair of suitcases while we were at a supercharger stop. We kept the old suitcases loaded in the back but still had plenty of room for more. That’s the power of two trunks. Beyond that, there is the security. Having a hatch, even with the parcel shelf hiding your trunk’s contents, to me could be risky. All it takes is a smash and grab to get to things. The front trunk, however, secures and completely hides contents like a traditional trunk does. Christmas shopping season is upon us! Then there is the convenience of loading when you back into parking spot like I do.

Last, but not least, there is the ever present chance that someone will see you placing something under the hood. You can then choose between walking away and leaving the gawker confused, or educating the world on the joys of driving an ICE-less beast. Having the single motor S85 means I have the space to load all this junk in my frunk and more.