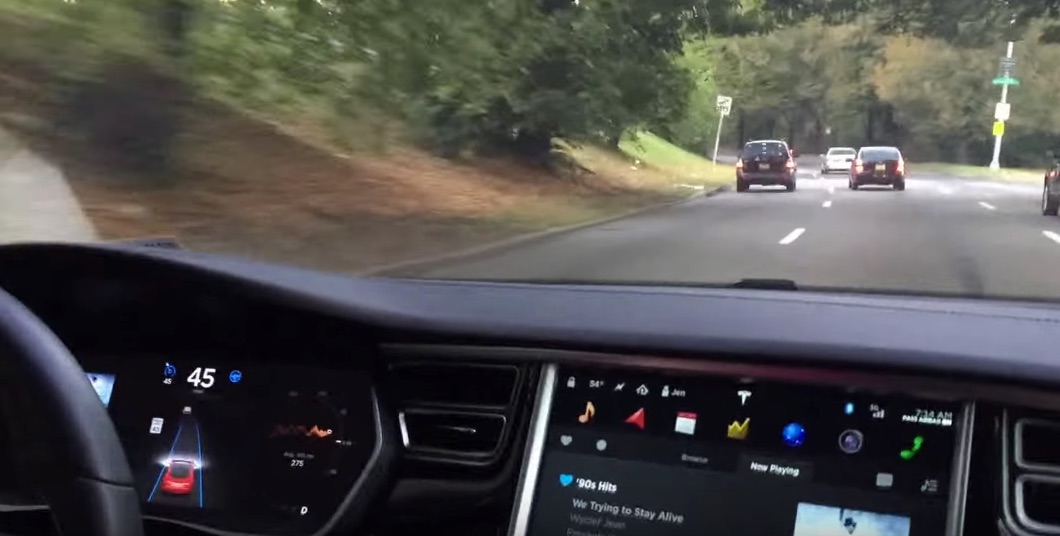 During Tesla’s third-quarter earnings call, Elon announced that the company will be looking into putting “some additional constraints” on the Autopilot system in order to “minimize the possibility of people doing crazy things with it.” I figured this could be a good opportunity for me to take note of how the current Autopilot 1.0 beta behaves under conditions when both visual and audible cues are ignored. These results can serve as a basis for a before and after comparison of Autopilot 1.01 and beyond.

To preface, the very first warning in the Autosteer section of the Model S owner’s manual reads:

Warning: Autosteer is a hands-on feature. You must keep your hands on the steering wheel at all times.

So what happens when we ignore the Tesla Autopilot warnings?

The answer appears to depend largely on the route you’re taking.

On a recent long distance drive, my husband experienced something interesting while Autopilot was engaged. The car gave him both visual and audible warnings to hold onto the wheel. The audible warnings increased in frequency until a message demanded that he place hands on the steering wheel to maintain speed. In the name of science, he assessed his surroundings and determined it was safe to see what happened. The car decelerated to 35 mph before he found the need to take over.

His cruising speed was 70mph and as he recalls, he had been hands off for more than 10 minutes. On Friday evening, we set out to recreate the warnings.

For our attempt to force the Hold Steering Wheel message to pop up, my husband drove at 60 miles per hour on an appropriate highway while I took notes and had a camera handy. He had his hands hovering slightly above the wheel, ready to take over if needed. We drove for 10 miles without the message appearing. Because the car was in the right lane, it unfortunately followed an exit lane and we were forced to cancel the experiment. We got back on the highway headed toward home and tried again. This time, the experiment lasted only two minutes before construction barriers and disappearing lane markings made it inappropriate to continue using Autosteer. The second run had lasted for only three miles at 70 miles per hour and resulted in no warnings. The increased speed was set in case that was what caused him to receive the warning once before but not during our first leg of the experiment.

While we lost sunlight Friday, we were determined to capture the warnings and slow down, so we planned to try again soon. Sunday morning, with no camera or notepad handy, our car suddenly flashed the previously elusive Hold Steering Wheel message during a very short Autopilot use.

We were driving westbound on I-76 in Philadelphia for a distance of less than 2 miles when the warnings began. What made this happen? Why hadn’t it happened Friday night? We suspect it is because where I-76 turns into the Roosevelt Expressway/Route 1 North, the road curves. Excited to report my findings even though I did not capture appropriate pictures of the warnings, I sat down to make this post and decided to refer to the owner’s manual for exact wording of the warning screen. To what did my wondrous eyes appear but the following statement:

“When entering a curve, if Autosteer does not detect your hands on the steering wheel, it displays the following message on the instrument panel and eventually sounds a chime…” And there you have it, folks! In addition to our inherent desire to ignore rules, we also have a tendency to not read those rules carefully at first. Driving on a curving road is exactly the situation that causes an Autopilot-enabled Tesla with Autosteer to warn you for not holding the wheel.

On the other hand, if you were to ignore both visual and audible Tesla Autopilot warnings, the vehicle will automatically decelerate to a lower speed.

Let’s see what the next version of Autopilot will bring!