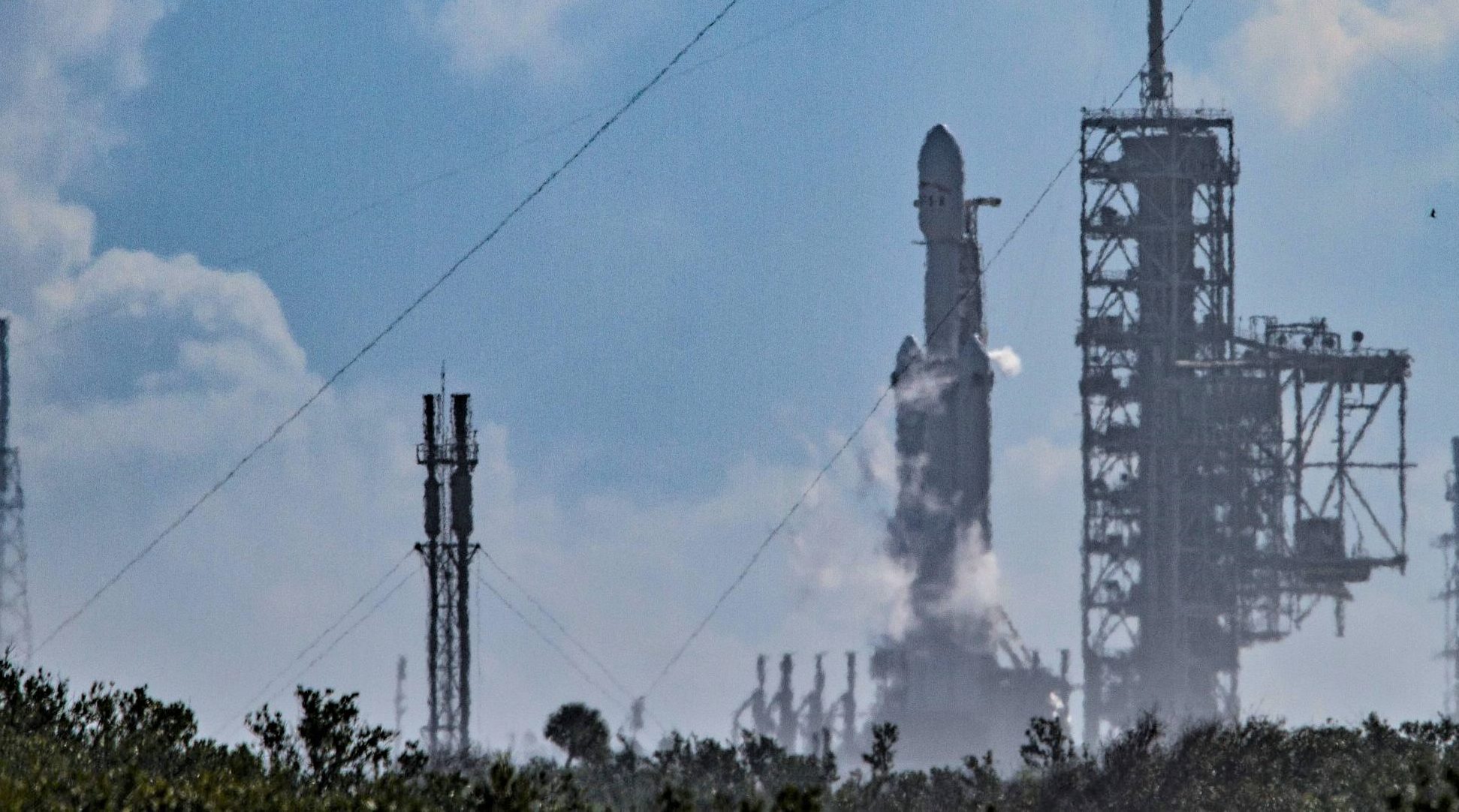 Although uncertainty in the schedule remains, SpaceX’s Falcon Heavy rocket appears to be nearly ready for its first engine ignition test (called a ‘static fire’) sometime within the next week or so.

An attempt at 1 PM EST today, January 16, was canceled for unspecified reasons, although Kennedy Space Center reportedly maintained the usual roadblock to prevent vehicles from driving past, implying that SpaceX still intends to conduct propellant loading tests with Falcon Heavy. It was noted earlier this morning by spaceflight journalist Chris Bergin that things were “a bit too quiet” if a test was indeed planned for today, and his intuition appears to have been correct. It still remains the case that Falcon Heavy is an experimental and untested rocket to an extent, and these delays are to be expected as SpaceX works out the inevitable kinks and bugs that arise during the extensive testing big launch vehicle has been and is still being put through.

KSC is in roadblock stance, so they will still do some testing it would seem, but we will have to wait for the Static Fire itself. https://t.co/DxzsRn85NR

Due to range requirements in support of an upcoming launch of the United Launch Alliance’s (ULA) Atlas 5 rocket, currently NET Thursday, SpaceX has postponed the static fire of Falcon Heavy without a replacement date. It is unlikely that another attempt will occur before the upcoming weekend, but SpaceX should have at least a solid week of uninterrupted range support once ULA’s launch occurs, hopefully without delay. Godspeed to ULA, in the meantime.

The crazy complexity of rocketry

Most recently, and perhaps somewhat related to Falcon Heavy’s static fire delays, SpaceX completed as many as two complete wet dress rehearsals (WDRs), which saw Falcon Heavy topped off with full tanks of its cryogenic (super cool) liquid oxygen (LOX) and rocket-grade jet fuel (RP-1). In essence, the rocket became equivalent to several hundred tons of carefully stabilized explosive. Nominally, these rehearsals appear entirely uneventful to an outside observer, with little more than ice formation and the occasional bursts of propellant tank vents to suggest that something important is occurring. However, anomalies like the failure of Falcon 9 during the Amos-6 static fire provide a staggering demonstration of just how explosive and sensitive a rocket’s fuel is, and Falcon Heavy has approximately three times the fuel capacity of Falcon 9. Empty, Falcon 9’s mass has been estimated to be around 30 metric tons, a minuscule amount of structure in the face of the more than 500 metric tons of propellant the vehicle carries at liftoff.

These propellant loading tests can also be challenging for reasons aside from their highly explosive nature. Due to basic realities of the physical nature of metal, the predominate ingredient for Falcon 9’s load-bearing structures, metallic structures shrink under extreme cold (and expand under heating). In the case of Falcon 9’s massive 45 meters (150 foot) tall first stage, the scale of this contraction can be on the order of several inches or more, particularly given SpaceX’s predilection towards cooling their propellant as much as possible to increase its energy density. For Falcon 9, these issues (thermodynamic loads) are less severe. However, add in three relatively different first stage boosters linked together with several extremely strong supports at both their tops and bottoms and that dynamic loading can become a fickle beast. The expansion or compression of materials due to temperature changes can create absolutely astounding amounts of pressure – if you’ve ever forgotten a glass bottled drink in the freezer and discovered it violently exploded at some future point, you’ll have experienced this yourself.

With several inches of freedom and the possibility that each Falcon Heavy booster might contract or expand slightly differently, these forces could understandably wreak havoc with the high precision necessary for the huge rocket to properly connect with the launch pad’s ground systems that transmit propellant, fluids, and telemetry back and forth. Information from two reliable Kennedy Space Center sources experienced with the reality of operating rockets, as well as NASASpaceflight.com, suggested that issues with dynamic loads (such as those created by thermal contraction/expansion) are a likely explanation for the delays, further evidenced by their observations that much of the pad crew’s attention appeared to be focused at the base of Transporter/Erector/Launcher (TEL). The TEL base hosts the clamps that hold the rocket down during static fires and launches, as well as the Tail Service Masts (TSMs) that connect with the Falcon 9/Heavy to transport propellant and data to the first stage(s). These connection points are both relatively tiny, mechanically sensitive, and absolutely critical for the successful operation of the rocket, and thus are a logical point of failure in the event of off-nominal or unpredicted levels of dynamic stresses. 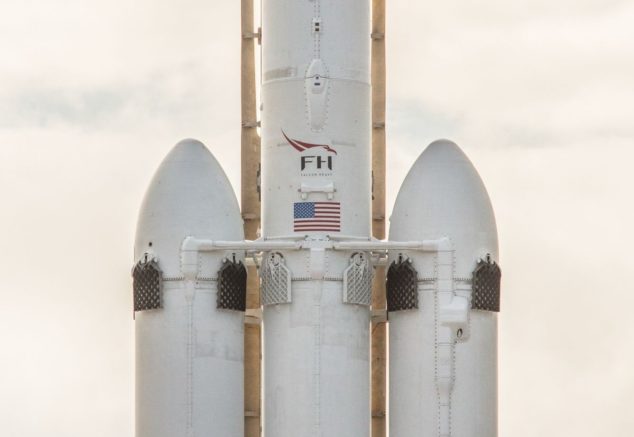 The white bars in this photo are half of Falcon Heavy’s seperation mechanism. A number of actuators take the place of the more common solid rocket motors used with vehicles like the Delta IV Heavy. (SpaceX) 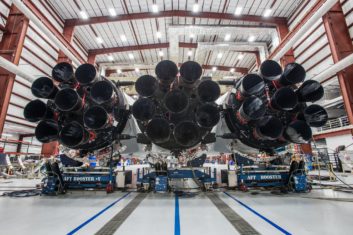 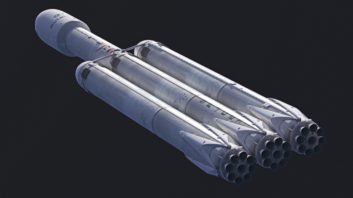 All things considered, these difficulties demonstrate that even after months (even years) of relentless modeling, testing, remodeling, and retesting, rockets (and especially huge rockets like Falcon Heavy) are immensely complex, and even tiny mistakes can lead the vehicle to stray from its expected behavior. Quite simply, the reality of engineering only truly comes into play once hardware is fully in the loop, and it’s in this state that SpaceX has demonstrated again and again a distinct and elegant ability to learn from their hardware, rather than attempt to salve uncertainty with a neurotic and counterproductive level of statistical analysis, modelling, and documentation. The agile launch company still dabbles in those aspects when beneficial or necessary, but testing comes first in its importance.

The conclusion here, then, is that Falcon Heavy’s delays betray this aspect of SpaceX – a launch company that loves its fans, but also understands the need for cautious testing when it comes to new and untried rocket hardware. Whether Falcon Heavy succeeds or fails, SpaceX will learn from the proceedings, and they will be better off for it (although maybe less so financially…).