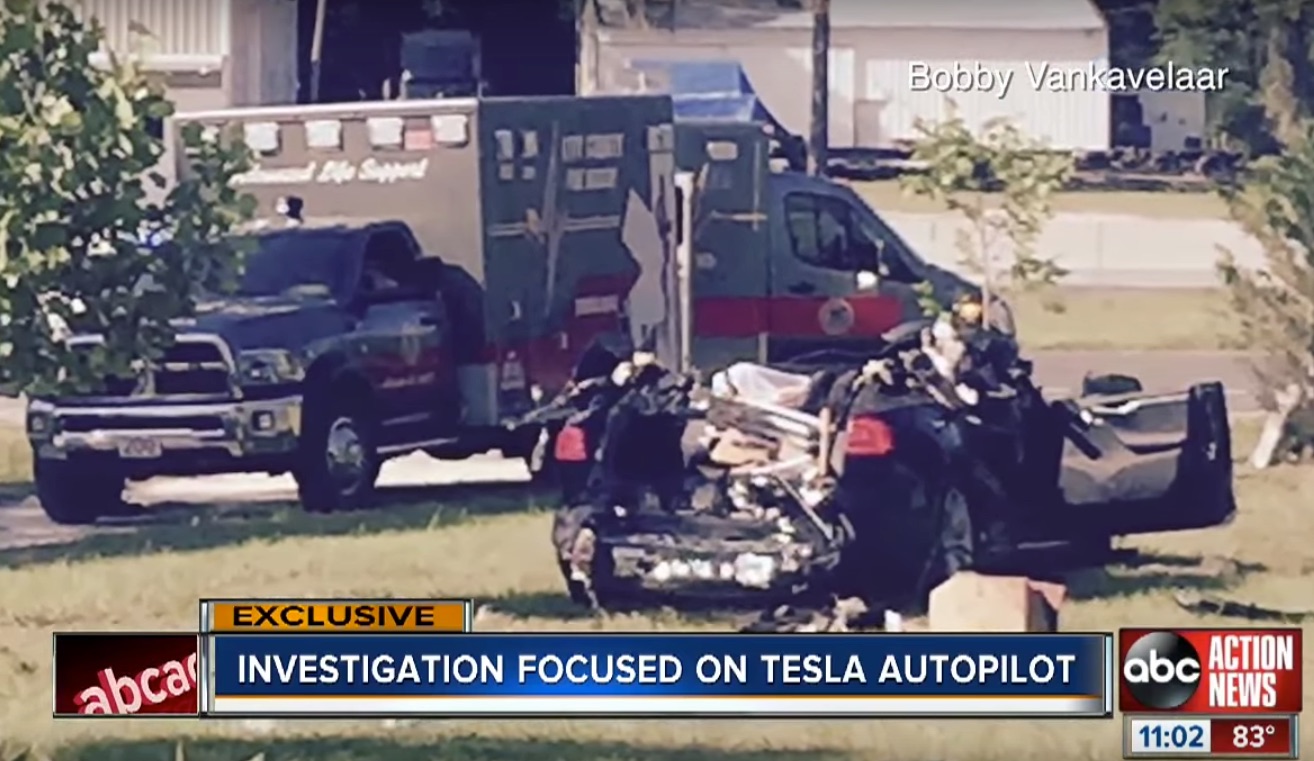 New details from witnesses of the fatal car accident involving a Tesla Model S and a tractor trailer reveal that the Autopilot enabled vehicle continued to drive on its own even after the roof sheared off.

Bobby Vankavelaar owns the home where the mangled Model S driving on Autopilot eventually came to a stop after colliding with a tractor trailer and killing 40-year old Joshua Brown who was behind the wheel. In a video published by ABC Action News, Vankavelaar tells the news outlet that the Tesla traveled “hundreds of yards from the point of impact, through a fence into an open field, through another fence and then avoiding a bank of trees before being unable to swerve and miss a power pole that eventually stopped the car a few feet away.”

According to another witness that was driving eastbound on U.S. 27A – the same interstate the Tesla was traveling on – the Model S on Autopilot passed her while she was driving at 85 mph. This detail not mentioned by the official police report filed by the Florida Highway Patrol provides further insight into why the deadly collision may have happened with the tractor trailer that turned before it.

The 62-year-old driver of the tractor trailer, Frank Baressi, told the Associated Press (AP) that the Tesla was driving so quickly that it “went so fast through my trailer I didn’t see him.” Combined with the alleged high rate of speed the Model S was traveling, Baressi tells the AP that he witnessed the Tesla “playing Harry Potter on the TV screen” though he acknowledged that he only heard the movie and couldn’t see it. “It was still playing when he died and snapped a telephone pole a quarter mile down the road,” Baressi tells in an interview with the AP.

The police report indicated that Brown’s Model S collided with a tractor trailer that was perpendicular to it and continued to travel underneath it after having its windshield and roof sheared off. Because the vehicle was in Autopilot at the time, the vehicle continued to travel before veering off the road, careening through two fences, and finally coming to a rest after striking a utility pole approximately 100 feet south of the road.

Tesla released a statement on their blog:

“What we know is that the vehicle was on a divided highway with Autopilot engaged when a tractor trailer drove across the highway perpendicular to the Model S. Neither Autopilot nor the driver noticed the white side of the tractor trailer against a brightly lit sky, so the brake was not applied. The high ride height of the trailer combined with its positioning across the road and the extremely rare circumstances of the impact caused the Model S to pass under the trailer, with the bottom of the trailer impacting the windshield of the Model S.”

Tesla said “the high ride height of the trailer combined with its positioning across the road and the extremely rare circumstances of the impact caused the Model S to pass under the trailer, with the bottom of the trailer impacting the windshield of the Model S.”

Though this accident marks the first Autopilot related fatality in more than 130 million miles of driving bringing to light that fatalities are statistically inevitable, Tesla CEO Elon Musk has on many account reaffirmed the company’s position that Autopilot is still in beta and requires drivers to maintain control of the vehicle by having hands-on-wheel.