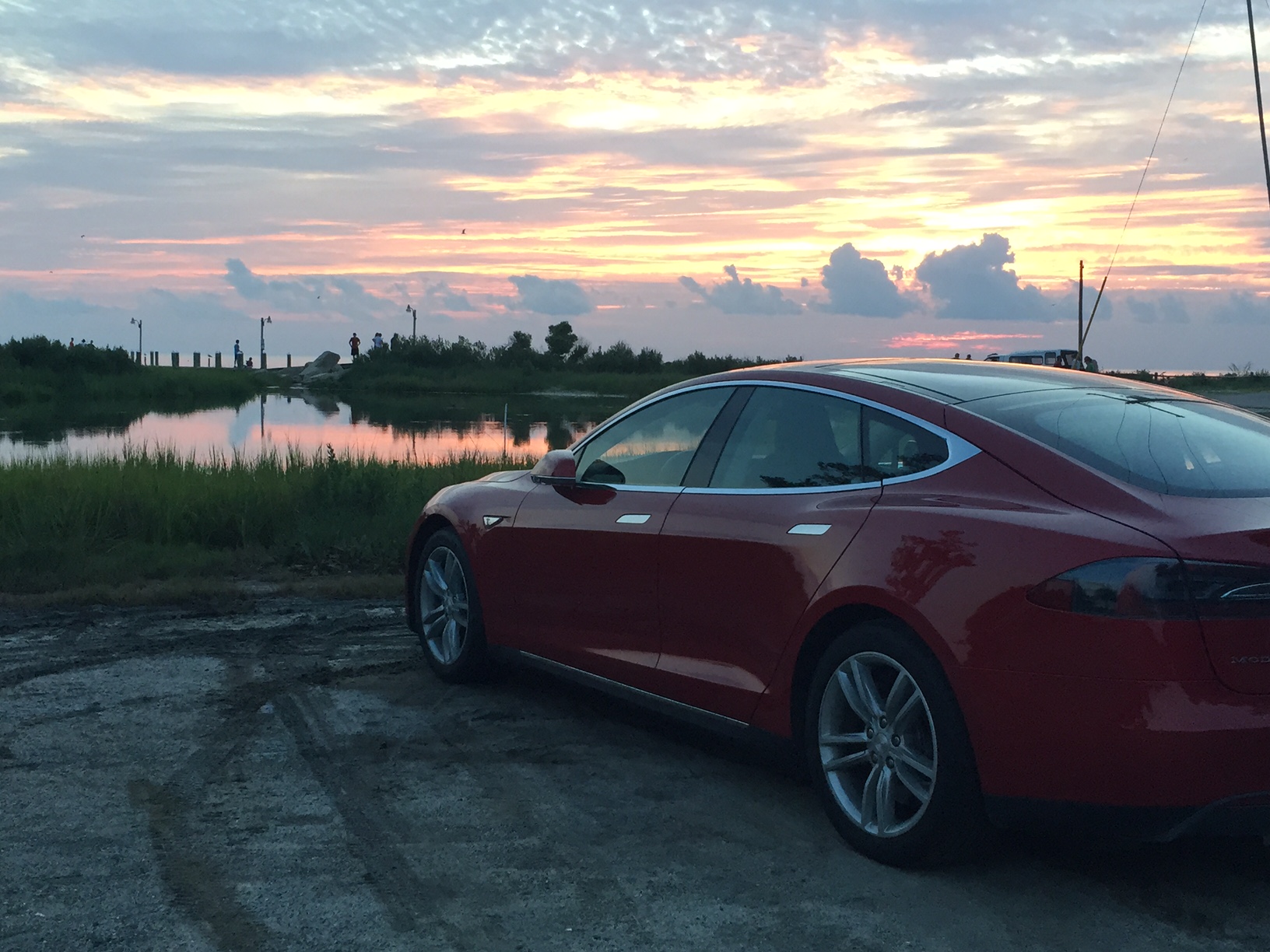 A year ago this month, my husband and I picked up our brand new Model S after a 108 day wait. It has been quite a ride and I wanted to share the experience for any potential owners who wonder if the “wonder” wears off, new owners who are still in the honeymoon phase and veteran owners who have plenty of stories of their own.

In May of 2014, I convinced my better half we should test drive a Tesla. He was looking to replace his 4-door Jeep Wrangler. In a bright “Mango Tango” orange paint with large wheels, it was right at home at both the beach or in the snow. It did not, however, know how to keep speed up a hill. Or go fast. At all. The decision process that brought us to that day in August when we finally ordered the car is for another post entirely. (Spoiler: The Tesla is a pretty expensive car and most owners really have to think about it before dropping that kind of cash.) Thanks to delivery schedules, our east coast pickup location and the announcement of “the D” our order-to-delivery time was pretty darn long. And we felt every single day of it. So when the excitement of the day finally arrived, we could hardly contain ourselves. In fact, we were so excited that we forgot to hand over the check for the car and had to go back to the service center after having already left. That little gaffe aside, delivery went exactly as planned. The car was nearly flawless. A few scuffs we thought we saw turned out to be glue residue. They were quickly cleaned up while our delivery specialist gave us our tour. She was pleasant and knowledgeable, which was consistent with our experience with show room employees at the showroom location of our test drive 6 months earlier.

It was already dark for our ride home so we didn’t go for too much of a joy ride, but my husband pulled the car over halfway and let me finish out the drive. (He actually offered me the fob when we first left the service center, but I passed.) We set the regenerative braking to the higher level despite my initial plans to ease into it. For those on the fence, the one pedal driving is the best feature you didn’t know to look forward to. Trust me. The car performed exactly as we hoped and our cheeks were sore from smiling the whole way home.

3 weeks later, Christmas was our first trip away from home. We visit a town about 110 miles north of where we live for holidays. That 110 miles is over and past mountains so range always suffers. The Supercharger location we anticipated being built in Allentown, PA in 2014 never happened so we ended up charging with a combination of extension cord on a 110V outlet and a level 2 charger a 10 minute drive from where we were visiting. (Little did we know that we would end up having to deal without an eastern PA Supercharger for another 12 months.) We outfitted the car with all weather mats pretty quickly and would recommend them to anyone. The trip was great and the car has all the room one could need for two passengers, luggage, holiday gifts and a 55-pound pup.

Our first service center trip happened rather quickly. We never actually noticed that the rear passenger door handle didn’t present until we started showing off the car to family around Christmas. We scheduled the service visit for a future day that a loaner was available because this issue was very minor and we weren’t in a rush at all. Service was swift and without issue.

Two months in we had our first real road trip planned. Our ultimate destination was Savannah, Georgia with a one night detour planned in Charleston, South Carolina. As is always a risk with winter traveling where we live, a pretty sloppy snow and ice storm thwarted our plans to depart Philadelphia around midnight. We ended up waiting until closer to 5am but despite the horrendous road conditions that the City had not yet dealt with (it was a Sunday morning) the Tesla performed wonderfully. We took it easy of course and never felt unsafe. That trip is where my whole perspective on road trips changed. The requirement to stop and charge means you get plenty of rest room breaks, chances to stretch your legs and really convenient markers to swap driving responsibilities every 2 hours or so. Neither one of us felt tired and we both agreed that the trip felt much shorter than it really was. It was also on this trip that we began to look forward to the car’s potentially efficiency in warm weather. Getting the car in December we were in for a bit of a surprise at how much range suffered and regen was limited. Though winter felt long as they often do, spring gave way to warm temperatures, better efficiency and lots of reasons to open the panoramic roof. Our initial disappointment over how much our electric bill went up the first month with the car leveled off as the car started driving much more efficiently. We made a few additional changes at home such as LED bulbs and a “smart” power strip for our basement entertainment center and now find ourselves using the same amount of electricity as we did before we replaced an old bar refrigerator and washer/dryer pair, which was also before we had the car.

Around the 6 month mark, my passion was every bit as strong as it was when we were waiting for delivery. I decided to do a local car show and can barely describe what a fun day that was. I spoke to hundreds of people non-stop and unexpectedly came away with a trophy after being softly scolded by a judge for not knowing the car show protocol of being required to have your trunk and hood open. One embarrassing problem was that our rear passenger door handle started to act up again. This time, the door was actually popping open when the car unlocked. It was a hassle because most days the car is driven solo and the driver had to walk all the way around the car to close it. On the day of the car show I had my fob on my person so walking back and forth around the car meant the door popped open many times. Curious onlookers raised eyebrows as the car’s “trick.” That issue also required a service visit, but again we waited until a loaner was available. Other than having to take it to service at all, the experience was great. By July, it was time for our second road trip. This time the plan was camping not far from Virginia Beach. We had been told many times that charging at RV parks is easy so we barely thought a thing about rolling into our destination with low mileage and no live Superchargers nearby. As it turned out, that RV park was rather old and our site had an older outlet. We needed an adapter, which the campground’s general store thankfully had. The adapter still led to disappointment as the car still wouldn’t take a charge from anything other than a 110v outlet. A trickle charge wasn’t going to work – we had two day excursions planned while we were in the area. After consulting the Tesla Forums, I learned enough about the outlet situation to ask the campground if they had 14-50 outlets at some of their larger sites. Fortunately they did and a camp employee gave me the old “you didn’t hear it from me but…” when describing their one site that they never rented out. We were able to park the car there overnight twice to get all the range we needed. If you do plan on RV charging, I suggest making sure they have the more modern hookups. You should also leave yourself extra time for picture taking. The Model S makes a beautiful addition to a scenic view. Not very long after getting home from that trip I started charting out our next. I’ve never been to Chicago and really want to but figured out that trip would be a little longer than we were willing to take off work at that time. New England it was. The only three states I hadn’t yet been to on the East Coast were Vermont, New  Hampshire and Maine. I fully intend for the Tesla to carry me to all the states I haven’t seen. I have a long way to go. Our trip to Portland was easy enough on the supercharger network. We snuck an extension cord out the window from our second story AirBnB apartment to trickle charge overnight and got just enough juice to take us to our next charging opportunity on the way to Portsmouth, NH. Our last stop, Burlington, Vermont, had a public Level 2 charger just a block from where we were staying so we happily parked, checked into PlugShare and charged just enough to get us to the first Supercharger on the way home. Another Tesla was not so kind. We noticed a black Model S with New Jersey tags park there later that day and stay overnight. Even at 0 miles left on the battery, he couldn’t have needed to stay that long. I was very disappointed, as I saw not one but two other Teslas circling the area, presumably needing a charge. With the Burlington Supercharger since online, I imagine this won’t be an issue going forward. That’s the real beauty of the Supercharger network; it changes weekly. In fact, from the time we planned our route to the time we embarked, an additional charger popped up in New Hampshire. We didn’t need it but it was a nice surprise.

A full year after Autopilot was announced, it finally went live with an over the air update. The timing of our order was pure luck and our car was delivered with the hardware in place. The implementation of AP has been everything I expected and more. In fact, that very thing inspired me to make this video, which I never imagined would be watched by more than a few dozen Tesla forum members.

Further delays with an Allentown, PA Supercharger location meant we faced another potential winter where skiing at our preferred mountain near Scranton, PA would mean taking a gasoline powered car. I’m thrilled to say that as of this past week, ground has finally broken. And while we will still end up having to charge creatively over Christmas because it won’t be live yet, the end is finally in sight. 16 months after we ordered the car and were told a charger in that much-needed location would be built “soon,” it’s finally happening.

Did that particular charger, which was shown on the 2014 map sway our decision to buy the car? Absolutely. Did the long delay really grind our gears? You bet! Do we regret not waiting until it was built to get our hands on the greatest car ever built? Not a chance, so if you’re a potential owner on the fence, don’t wait. Every day you do is another day you are deprived the distinct pleasure of driving a car so amazing that it inspires me every single day.