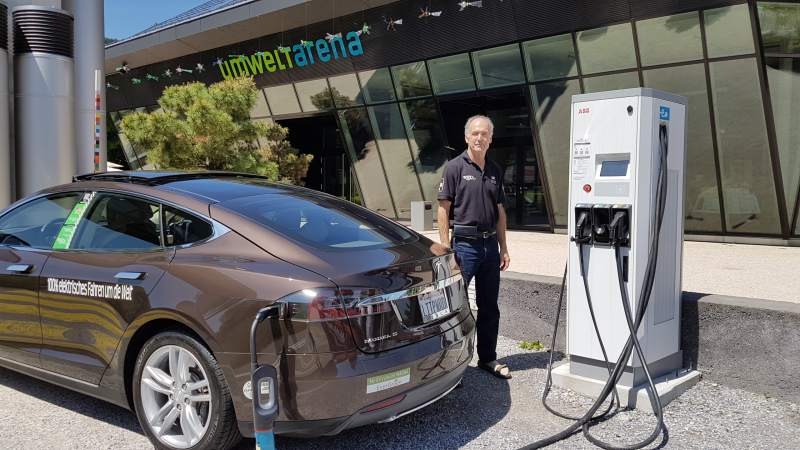 On June 15, Alan Soule of Sebastopol, California left Barcelona, Spain in his 2012 Tesla Model S. Over the next 80 days, he will travel more than 15,534 miles through 20 countries and across North America, Asia, and Europe before arriving back in Barcelona on September 4.

Soule is part of an event called 80dDays designed to demonstrate that electric cars can be used to travel long distances sustainably. In all, drivers from 7 countries — Switzerland, Germany,  China, Hungary, the Czech Republic, Austria, and the US — are entered in the event.

The route will cross the Alps and the Rockies, traverse the Gobi desert, and visit many of the world’s major cities before ending back where it started. If all goes as planned, all 11 teams will drive together through the Arco de Triunfo in Barcelona 80 days after their journey began.

Soule, a 66 year old retired commercial building contractor, has been planning his journey for more than a year. “I have always been interested in alternative energy for vehicles,” he said. “I had a car that ran on propane back in the ’70s, and then when General Motors came out with the EV1, I leased one of those, and that was in 1999.”

He purchased a Tesla Roadster when they were first introduced in 2008 and took it on a trip down Route 66 in 2012. “From all the research that I’ve done, I’m almost positive it’s the first electric vehicle to drive Route 66,” he said. That same year, he bought his Model S.

One day at the Tesla Service Center in Menlo Park, California, he met Rafael de Mestre. The Spaniard was attempting to drive his Tesla Roadster around the world in 80 days. He failed in his quest but the two men kept in contact. When de Mestre mentioned the 80eDays event, Soule decided he and his Model S would join the fun.

Preparing for the trip has been a full-time job, Soule says. Obtaining visas from China, Kazakhstan, and Russia took quite a lot of time, as did planning the route they would take. “I originally wanted to go through Turkey because I like Turkey, but there are problems there,” Soule says.

“And I’ve been told that Belarus has a lot of gangs. And the southeastern portion of Ukraine is where the Russians are trying to make a stronghold. But if you go up through Latvia, that’s an extra 600 miles, and we don’t want to do that, so we’re going to take a chance and go through northern Ukraine and see what happens.”

The route from Barcelona leads southwest to Lisbon, Portugal, where the teams have chartered a plane to take their cars to Halifax, Nova Scotia. From there, they head west to New York, Chicago, and Denver. After making their way to Los Angeles, they will  again go by plane to the southeastern edge of China in Guangzhou. From there, they will continue their journey west across Asia and Europe before arriving back in Barcelona.

Soule has lined up a rotating crew of five co-drivers who are friends and friends of friends. They will meet him and his Model S at various places along the route. To help people follow his journey,  set up a Twitter account, Periscope, and a team website. His car is equipped with a 360 degree camera which he will use to upload video as he travels.