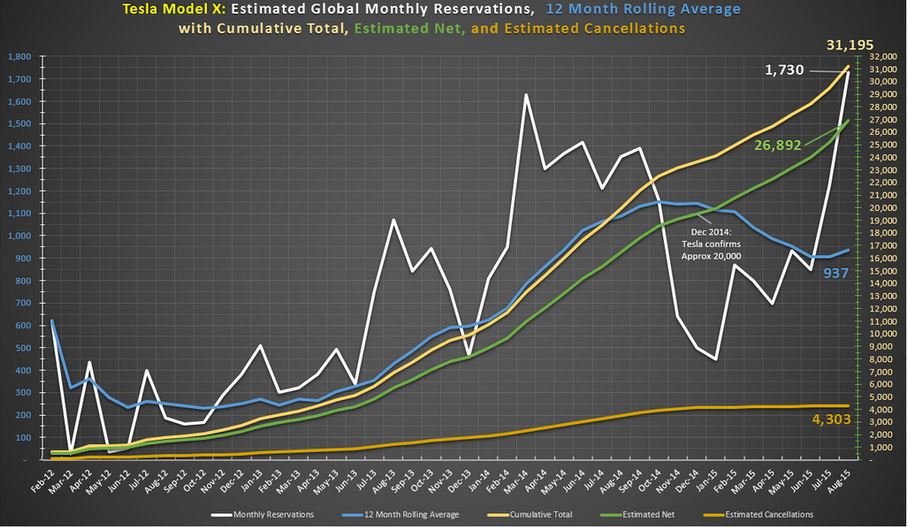 Reservations for the Tesla Model X spiked in August after Elon Musk said the first cars would be produced soon. Those cars will be Signature Series models. Paul Carter, possibly the hardest working Tesla Motors Club forum moderator, tracks global reservations for the Model X and posts his results monthly. His findings show that there were more reservations made in August than in any prior month. As of August 31*, his data shows Tesla had about 27,000 Model X reservations.

Interest in the Model X turned white hot after Elon Musk told investors during a conference call early in the month that the first Model X cars would be delivered in the third quarter. In fact, that promise will be kept when Tesla delivers the first Model X to customers at the factory in Fremont, California on September 29.

Up to that point, there was some skepticism about when production of the Model X might actually begin. Musk himself contributed to that feeling by referencing delays in receiving critical parts for the production line despite a ramp up in customer reservations in August. Not surprisingly, most of the reservations for the Model X have been made by people living in the United States, including Paul Carter, who’s one of the lucky few to have committed to a Signature Series. Reservations of the Model X soared once Tesla revealed its online configurator to early reservation holders, giving insight to how the production version of the electric crossover will look.

But the question remains, when will the backlog of Model X reservations get built and delivered? Elon’s words at the last conference call seemed to suggest that full production will not begin until late 2015. Some observers speculate it could be early 2016 before regular production gets started.

The first orders to be filled will be for those who put up a $40,000 deposit, some of them almost 2 years ago. These early reservation holders will receive a limited-run Signature Series that comes loaded with options, driving the price up to $132,000 and beyond. But Elon tweeted last week that the regular Model X will be priced just $5,000 more than a comparably equipped Model S.

Other auto manufacturers, particularly Audi, are rushing competing models to market in hopes of tapping into the demand for an electric SUV. But for now, the Tesla Model X is the hottest car on the planet.

It, just, may take a while before there are enough cars manufactured to satisfy the demand for it.