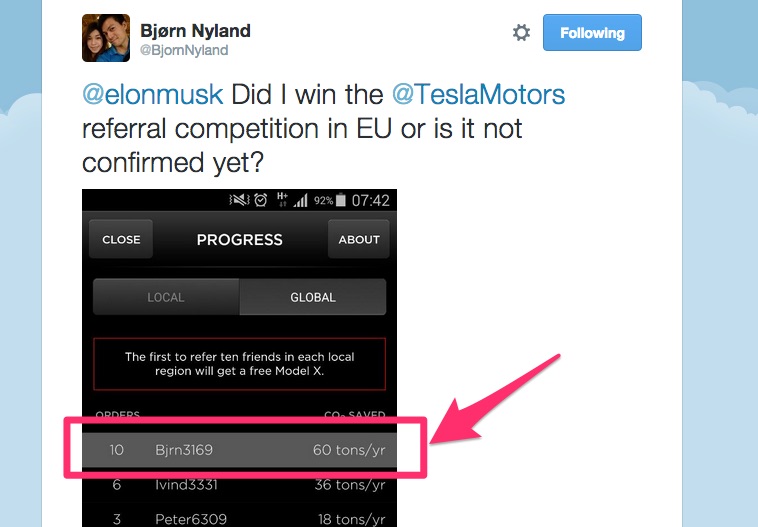 Bjorn Nyland of Norway appears to be the first person in the world to sell 10 new Model S cars as part of the referral program announced two weeks ago.

Bjorn Nyland, Norway’s most influential Tesla owner, appears to be the first person in the world to refer 10 new Model S owners as part of the Tesla referral program announced just 2 weeks ago. That program promised the first person who referred 10 people to purchase a new Tesla Model S would win a free Founder’s Edition of the Model X, including $25,000 in options.

Bjørn is one of the most enthusiastic Tesla owners in Norway, with his own YouTube channel featuring videos of his Tesla driving adventures throughout his native country and other parts of Europe. The day after Tesla announced the referral program, he posted a video on YouTube explaining the program to his many followers, along with his referral link. Little did he know, the Tesla community rallied in support to catapult him to become the first ever person to win a free Model X through the referral program.

On August 7, the Tesla Motors app showed him in the leading spot to have referred 10 purchasing Model S customers, so Bjørn Tweeted Elon Musk to ask if he had won.

@elonmusk Did I win the @TeslaMotors referral competition in EU or is it not confirmed yet? pic.twitter.com/2ubMshgDLL

His victory was confirmed by Elon although it came with a kicker. All 10 new Model S owners must take delivery of their cars which, in this case – presumably all of Bjørn’s referrals are from Norway – could take months before the vehicles are delivered overseas.

@BjornNyland Provided all ten take delivery, you have indeed!

If all of Bjørn’s customers follow through (he probably has others lined up in case one drops out), he will be a featured guest at the GigaFactory opening ceremonies, and will soon be touring around Norway in his new Founder’s Edition Model X. It’s a victory well-deserved especially as the community anticipates Nyland will “give back” by making plenty of YouTube videos of the new electric crossover.

Congratulations to Bjørn Nyland and to Tesla for coming up with this promotion. If the intent was to create plenty of buzz for the company, they definitely accomplished their goal.

UPDATE
In Bjørn fashion, he took to his YouTube channel to thank all of his fans who have made this opportunity possible.