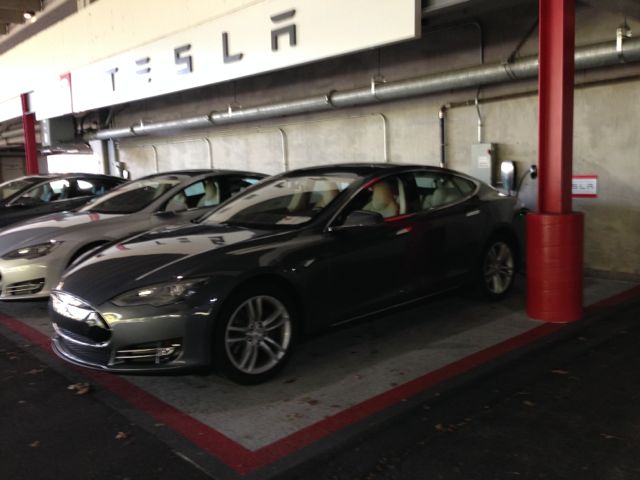 When I was buying my Model S I decided that I didn’t need the High Power Wall Charger (HPWC), but I did go with the dual chargers. At home I regularly charge on a NEMA 14-50 which gives me about 28 miles per 1 hour of charge, but with the onboard dual chargers it’s possible to double that rate provided you’re using the proper charger.

My office is across the street from the Tesla store in Natick, MA and they have free charging available in 6 parking spots with a couple of HPWCs a short walk away. The other day I skipped my nightly charge and parked in one of the HPWC spots at the mall for a charge the next morning.

The HPWC does not require any special adapters or additional cables and simply plugs into the Model S. It charges at up to 80A when equipped with the Model S dual chargers, but even without it things still work – just at half the charge rate. That’s what I love about the Tesla. Even if you know nothing about voltages, amperages and watts, things just work. Just plug, play and Tesla manages the rest. Unlike the Tesla Supercharger which uses a direct current (DC) that bypasses the onboard chargers, the HPWC uses a more traditional alternating current (AC) approach, but with a very high amp draw.

There are very few public chargers out there that can charge at over 40A, and the ones that do probably don’t have a Tesla Model S adapter such as the CHAdeMO.

The Model S has the ability to charge at different amperages depending on your setting. The rate is limited by both your car’s ability (40A or 80A for single or dual chargers respectively) and the maximum draw allowed by your power source. Make sure your charge rate is set to the highest limit before plugging into a HPWC in order to maximize your rate of charge. The charge rate settings should be auto-memorized by the vehicle based on your GPS location. After I confirmed that the car was charging, I walked to my office while monitoring my state of charge through the iOS app. It reported the charge rate to be about 50 miles/hour (208v at 81A) which confirmed that my dual chargers were working since I was charging twice as fast as my home NEMA 14-50.

I’ve heard about charge rates tapering off as your near the upper limits of your charge, but in my case it charged at the same rate all the way to a 90% limit. I’m assuming that the charge rate begins to slow down after the 90% mark, but unfortunately I didn’t have a chance to confirm that this time around.

My main goal was to be able to test my onboard dual chargers – something I debated long and hard on when ordering my Model S. I wanted to see them in action and gain peace of mind that they’re there and ready for fast charging if I should one day need it while on the road without access to a Tesla Supercharger.

The HPWC worked great and provided a high rate of charge that was twice the speed of my home NEMA 14-50. But even with that I still don’t think a HPWC at home is really needed.