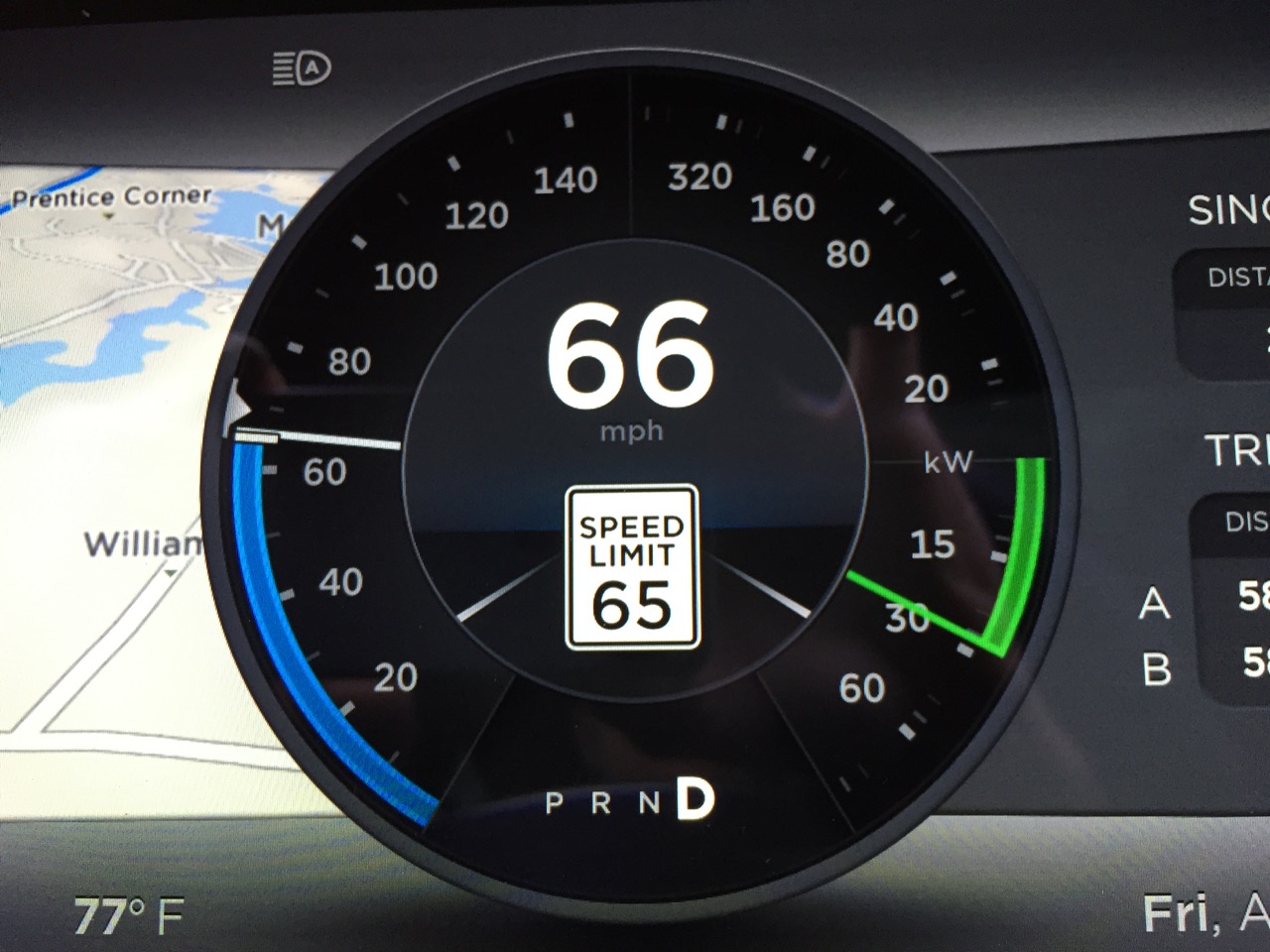 Being a pre-autopilot Model S owner from early 2014, I’ve been living vicariously through the experiences of other Model S owners that have experienced the new Autopilot features.

That was until recently when I was able to finally land a Tesla Model S loaner that came equipped with the autopilot hardware. Here’s my review of the features. The currently available Tesla firmware, 6.2, is a trimmed down version of what Autopilot will eventually be able to do. The upcoming firmware 7.0 promises the long-awaited Auto-steering capability, but until then, Autopilot is limited to the following features:

I won’t be covering all of these in depth, but will touch on a few of these features.

The current version of autopilot does not steer the car on its own, yet. It will not automatically keep your car in lane and it will not swerve to avoid an obstacle, but it will, however, perform braking on its own. Automatic parking and automatic retrieval of the vehicle is also not yet available.

It’s safe to say that anything that requires the car to steer on its own is not yet available with the current software.

Another notable feature that was missing from the current version of Autopilot was the ability to track speed limits when cruise control was enabled. In other words, you can set a fixed cruising speed, but it will not automatically adjust to speed limit signs.

The system also does not automatically adjust the car to stop signs and traffic lights, so you very much need to be in control of the car at all times. Tesla describes speed assist as the ability to detect speed limit signs through its front facing camera. The
signs are then analyzed and compared against GPS data to determine the speed limit at your current driving location. For routes where no
signs are present, speed limits are determined using GPS data (if available). Instead of determining the speed limit based on signs and GPS data, you can also manually enter an
arbitrary speed limit.

I tested Speed Assist through several smaller backroads across town and found that it consistently reported the right speed limit. I noticed a slight delay before it picked up the speed limit changes, but it always took place within 10 seconds of detecting a new sign. Once you exceed the speed limit threshold, the blue analog speed indicator begins to turn white.

For me, I prefer a mode where the speed limit sign pops up on the speedometer once you exceed your threshold. The audible ding that comes with the Model S gets old, fast.

This feature emits a slight vibration and buzzing sound whenever you get too close to the traffic lines on roads. The vibration and noise is very slight and can be overlooked. I found the feature to be not that useful considering the car is not able to correct you back into lane, but that will soon change once the Auto-steering controls arrive in Firmware 7.0. I hadn’t intended on testing this functionality with my loaner, but at one point with my adaptive cruise control on, my Model S loaner quickly caught up to the car in front and decided to treat it as an impending collision. I didn’t have time to take a picture of the screen but I can say that it applied the brakes aggressively. It’s reassuring to know that the car has me covered in a variety of situations by constantly scanning for adverse driving situations.

My only concern with Tesla’s collision avoidance system is any false alarms that may ensue because of heavy snow, fog, or even large insects that may come into contact with the sensors. I’m sure the system is intelligent enough to differentiate between a true collision versus adverse weather conditions and inanimate objects, but only time will tell how it works out in the long run.

I found the blind spot detection to be helpful and the indicators not that annoying. A little white indicator outside the speedometer will appear as cars enter the Model S blind spots. I drive a lot of back roads and deserted highways and I use my high beams any time I can. I’m very conscious of the impact to other drivers so I’m forever flipping them on and off.

Auto high beams on the Model S completely eliminates the need to think about it. It did as close to what I would have done, to the extent that I’d never have to think about high beams ever again. I loved it and wish I had it on my pre-Autopilot hardware-equipped Model S. Very cool.

I read the instructions and understand the concept, but the acceleration is so slight that I didn’t notice it actually overtaking a car. Maybe I didn’t test it right since I didn’t have much time to play with it.

With TACC enabled, you pick a trailing distance between your car and the car in front of you by twisting the cruise control stalk. You have options from 1 to 7 with 7 being the furthest away from the car in front.

On back roads when cruising between 25mph and 50mph, having a setting of 7 resulted in a distance that was a bit far from the car in front, and I found that the reaction time of the TACC automatic braking was slower than I anticipated, resulting in heavy braking.

Even at a setting of 7 I had a few moments where I knew the system was going to stop but was afraid the guy behind me was going to plow into the rear of the car. This behavior needs to be refined.

The TACC system has a number of displays as follows: The little hat on the speedometer is the currently set cruise control speed. The solid white or dashed line is what it thinks the current speed limit is — solid if its sure, dashed if its not sure or changing.

If a traffic stop is brief the system won’t go into hold mode and will immediately go back to following the car in front when it starts moving again (awesome for creeping traffic!). If the stop is longer, you need to tell it to resume the cruise by pressing the accelerator pedal, or by using the cruise resume function on the stalk. The experience is much smoother on the highway. You can, for example, set your cruise control at 90 mph, although not recommended, but Tesla allows you to set that as the maximum cruise control speed.

Overall I really like the TACC feature, but it’s still a bit choppy for my tastes.

The new Autopilot features (Firmware 6.2) on my Model S loaner was very cool and generally worked well. The nature of the autopilot hardware makes it prohibitively expensive for Tesla to offer it as an upgrade. For me it was great to experience features that newer generations of the Model S come equipped with, but more importantly it gave me a glimpse into what the future holds for Autopilot. Meanwhile I’m still loving my Model S as-is – well, when I get it back from a drive unit replacement, but that’s a whole other story.